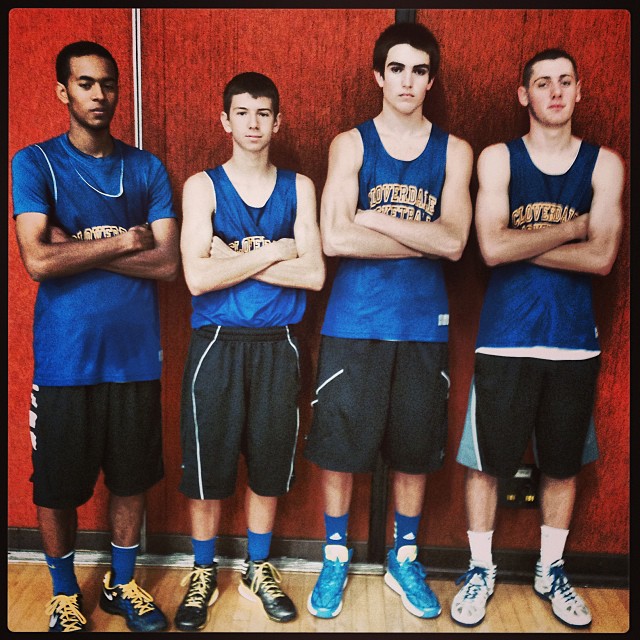 This presentation of the Top Five is going to start off at the top.

The reason this is No. 1 is because I lived it and the story behind it.

It might rate No. 1 on its own merit, whether I lived it or not.

At the beginning of the day the plan was to be a high school basketball free day.   It didn’t end up that way.

I ended up at the championship game of the John McMillan Holiday Invitational Basketball tournament in Cloverdale.  It really had nothing to do with basketball that I ended up there.

The championship game was between Cloverdale and Granada.   The fascination about the game itself wasn’t about seeing if Cloverdale would win its own tournament, but to see Granada.

As late as a month ago, Granada wasn’t even one of the teams scheduled to appear in this tournament.  One of the original eight dropped out because of budget concerns, and a SOS was put out for the eighth team.   Granada had the weekend open and answered the call.

Granada was out of place in this tournament.    They almost have more students then the other seven schools in the tournament combined.   They were a Division 1 school in a Division 4 world.

They aren’t a bad division 1 team either.   They aren’t great, but they finished over .500 the last two seasons.   They are in the same league as De La Salle, who won the Division 1 North Coast Section championship last year and whose basketball team isn’t as dominate at the school’s football team (who is), but they have won its share of NCS championship over the last decade in a half.

According to the NCS Website, Granada student count is 2,152.  In the first round they met San Francisco Waldorf, who is  at144.

I have never seen a team score 100 points in a high school game.   On Friday Night as the fourth quarter unfolded, I thought I was going to see my first.   I forgot about the running clock and they still had a chance, but fell short scoring 93.   That was less then they scored in the first round when they scored 96.

The tournament program told us that the record for the most points scored in a tournament was by Hoopa in 1995, when they scored 266.   It seemed like a sure thing that Granada would score the 78 points needed to break that record.

Now Cloverdale, as you probably know isn’t a bad program.   They are in the NCS playoffs most seasons and even have a couple of state championships to brag about.  Last year they were the No. 15 seed in the NCS Division 4 playoffs.   In the first round they met No. 2 Cardinal Newman and lost 75-46.

That is the kind of game that this had the feeling of.

Then the game broke out and as what happens in sports, it didn’t go to script.

Cloverdale scored the first eight points of the game.  I think they had a double digit lead in the first quarter.  I went there mainly as a fan and wasn’t keeping notes.

As some of you know I am from Cloverdale.   I graduated from Cloverdale.   This was more about visiting family and others, along with seeing Granada, then it was about covering the game.   My daughter had the deciding vote on whether to even go and she wanted to go see some friends too.

There was no way I thought this would be the No. 1 story of the night.

By the end of the first quarter, Granada had cut the lead to 21-18 and weren’t too far from the pace to get that tournament record.    Most were waiting for the big run.

I started taking notes on the program I bought.  Granada tied the game at 27-27, but wasn’t able to get a lead in the first half.  At halftime Cloverdale had a 30-29 lead.

The third quarter was back and forth with seven straight lead changes and eight all together.  The eighth gave Cloverdale a 42-41 lead going into the fourth quarter.

The Eagles pushed the lead to 49-44 with five minutes left and it was then that people started to believe that this could happen.  By then I was pure fan, enjoying what was turning into a great game.

Granada then scored six straight to take a 50-49 lead with four minutes left.

Cloverdale then scored five straight to make it 54-50 with two minutes left.

Granada then scored five straight, with included a three point shot with :30 left to take a 55-54 lead.

Isaah Warren, who was the game leading scorer with 24 points and would have been the player of the tourney if it wasn’t for the finish, hit two free throws with 9.4 left to give Cloverdale a 56-55 lead.

The great game didn’t ended great for the Cloverdale faithful.  Curtis Wiggington threw up an 18 footer that hit nothing but net as the buzzer sounded to give Granada the win.  It was the only score of the night for Wiggington, which was a statistical oddity of a remarkable game.

No record for Granada, just a great basketball team, that from the Cloverdale perspective gets a big “shoot” to go with it.

Now onto the other top five stories.

No. 5—Another NBL Girls team to worry about it

The NBL Girls race is usually one of the tightest of all races of any during the school year.   Add one more team that looks like they are ready to make some noise.

Ukiah won its own tournament defeating Montgomery 44-32 in the championship game.

The SRJC women met No. 1 San Francisco in the semi-final of the Carin Franci Tournament at SRJC and were defeated 69-44.

SRJC will play in the third place game today, San Francisco in the championship game.

Santa Rosa looks like a clear cut favorite in this year’s NBL race.   They raised their record to 4-0 with a 56-43 win over St. Francis to take the Terra Nova Tiger Classic championship game.

No. 2—Small over Large

Willits scored one for the small school with a 46-43 win over Ukiah in the Boys Championship game of the REIBT tournament in Healdsburg.

So there were almost two games that the small school beat a large school on championship night.