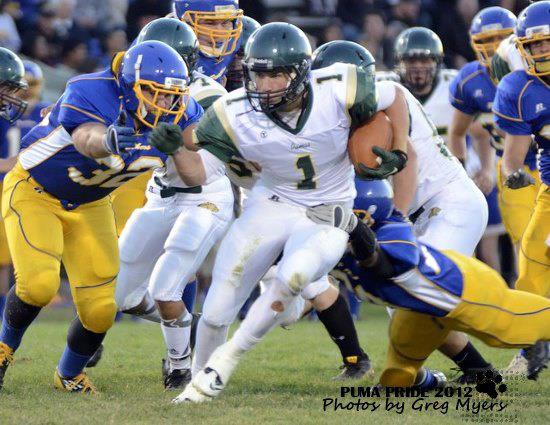 In this week’s preview it was called upset alert.
One team pulled it off.
The upset, combined with the other results, means for the first time this season there is no tie for first place in any of the league races..
NBL
No.2 Windsor 33 Santa Rosa 16
No. 9 Maria Carrillo 34 No. 3 Rancho Cotate 28
No. 4 Cardinal Newman 48 Casa Grande 7
No. 6 Montgomery 41 Ukiah 21
Windsor snapped out of a minor offensive slump with four second half touchdowns in a 33-16 win over Santa Rosa.  Jalen Roman threw two second half touchdown to give him eleven on the season.
Windsor was one of the teams on the night that was on upset alert for a bit, trailing 8-5 at the half.
Windsor had scored one touchdown in the last six quarters before scoring twice in the third and fourth quarters to take control of the game.
With the win Windsor is 7-0 on the season and 4-0 in NBL play, which is good enough for sole possession of first place.
Windsor is sitting alone in first place in the NBL race because Maria Carrillo pulled off the upset of the season with a 34-28 win over Rancho Cotate, handing the Cougars their first league loss of the season.
Things started out as expected as three different players scored and Rancho Cotate took a 21-7 halftime lead.
Rancho Cotate’s lead was almost gone halfway through the third quarter when Maria Carrillo scored touchdowns on back to back plays.   The first one was on the second touchdown of the night by Alex Netherda to cut it to 21-14.
On the ensuing kickoff, Walker Rotherham returned a fumble 45 yards for the second score.   Maria Carrillo missed the extra point so, Rancho Cotate still held a 21-20 lead.
Maria Carrillo was in this kind of game with Cardinal Newman but couldn’t finish it off.   It appeared that it might be happening again when Gunner Mefferd threw a 21 yard touchdown pass to Chris Taylor-Yamanoha.   It was Medford’s second touchdown pass of the game and gave Rancho Cotate a 28-20 lead.
That lead was short lived as Netherda did it again, this time going 50 yards for a score.  He then ran in a two point conversion which made it a 28-28 game.  Netherda, who may be the best kept secret in the area, rushed for 221 yards on the night and the three touchdowns..
It was a game dominated by the the offenses up until the fourth quarter, but then the defenses took over and Maria Carrillo’s scored what turned out to be the winning touchdown on an interception return by Fhestus Chomba with eleven minutes left.
It was Maria Carrillo’s only lead of the game and turned out to be the only one they needed.
After forcing a Rancho Cotate punt, Maria Carrillo put the ball in the hand of Netherda and was able to run out the last four minutes of the game by getting three first downs.
This was the ultimate trap game for Rancho Cotate.   Last week they had the overtime game win over Cardinal Newman and next week they go to Windsor.   If things had gone according to script, that would have been a battle for first place.  Now Rancho Cotate needs the win to stay in the race.
Rancho Cotate also needs a win to keep pace with Cardinal Newman, who moved into a tie for second with a 48-7 win over Casa Grande.  Jordan Brookshire threw for two touchdowns and ran for two more.  He now has a combined 23 touchdowns on the season.
Cardinal Newman is 4-3 overall and 3-1 in NBL play.   After a home game with Ukiah and a trip to Montgomery, they end the regular season with a home game with Windsor.
So there is a lot of drama to play out in the NBL race.
Montgomery was also on upset alert for a bit as they fell behind Ukiah 14-0, before rallying for a 41-21 win.  RJ Flores threw for a season high 282 yards and four touchdowns.
Montgomery is 3-4 overall and 2-2 in league play.   They mostly have a favorable schedule left with Santa Rosa and Casa Grande sandwiched around a home game with Cardinal Newman.

SCL
No. 1 Analy 67 Healdsburg 8
No. 10 Petaluma 49 El Molino 20
Piner 27 Sonoma Valley 9
This seemed to be only a matter of time.
Analy is in sole possession of first place in the SCL race after a 67-8 win over Healdsburg.  Ja’Narrick James rushed for four touchdowns, all in the first half.  It is the second game James has scored four touchdowns and gives him 14 for the season.
There was also some news that might effect Analy come NCS time.  McClymonds quarterback Kevin Davidson has been ruled ineligible for the rest of the season although there does appear that there will be an appeal process.  Analy’s only loss was to McClymonds 55-14.   As of now, McClymonds hasn’t had to forfeit any of the games Davidson has played in.  He didn’t play in the Sonoma Valley game last week.
Analy is in sole possession of first place because co-leader El Molino lost to Petaluma 49-20.   It is El Molino’s first SCL loss of the season and puts them in a second place tie with Petaluma.
Things started out well for El Molino.  Eddie Taylor scored on runs of 21 and 59 yards in the first four minutes of the game to give them a 14-0 lead.
The rest of the game didn’t go as well for either El Molino or Taylor.
Taylor sat out the second half because of a leg injury.
Meanwhile Petaluma took control.  They had a 21-14 lead by halftime thanks in part to two touchdown runs by Yusef Kawsami.
El Molino recovered an onside kick to start the third quarter, which led to a touchdown to cut the lead to 21-20, but on the next drive Harrison Royal caught a touchdown pass and Petaluma was on its way.
Petaluma would score two touchdowns in the last two minutes of the third quarter to put things away.  The last touchdown was a 30 yard interception return by Michael Devincenzi.   That was moments after Kawasami scored his third touchdown of the game.
Sonoma Valley missed an opportunity to stay in the logjam for second place in its 27-9 loss to Piner.
It was a game Piner dominated with a defense that recorded seven sacks and three interceptions, along with an offense that was led by Tyler Okiyama, who threw for 245 yards and four touchdowns.

NCL I
No. 5 St. Helena 20 Clear Lake 8
No. 7 Middletown 48 Kelseyville 0
No. 8 Fort Bragg 53 Willits 12
Cloverdale 40 Lower Lake 20
St. Helena was in the same situation as Rancho Cotate with one of those in between games.   With a big win over Middletown in the rear view mirror and a trip to Fort Bragg looming next week, there was Clear Lake, who was 0-3 in league play, standing in the way.
Although they struggled, St. Helena fared better.
Actually the only thing they struggled with was the score, which was 20-8.
Every other stat they dominated including outgaining the Cardinals by over 300 yards.
The Saints extended a 6-0 lead on the first play of the second half, when Jahaiver Otero went 78 yards to make it 12-0.  That was part of a 231 yard night for Otero.
Clear Lake blocked a punt to set up a touchdown to cut the lead to 12-8 with eight minutes left, but on the next possession Jack Preston, who had earlier scored the Saints first touchdown on a ten yard run, put the game away with a 36 yard pass to Jesus Hernandez.
The St. Helena defense held Clear Lake, who has lost four straight league games after a 3-0 start, to 101 yards of total offense.
Meanwhile Middletown, Fort Bragg and Cloverdale all stay one game back with one sided wins.
Wyatt Hall rushed for 138 yards and three touchdowns as Middletown defeated Kelseyville 48-0.
Kaylor Sullivan passed for 263 yards and four touchdowns as Fort Bragg defeated Willits 41-0
Cloverdale rallied from an early 8-6 deficit and scored four straight touchdowns in a 40-20 win over Lower Lake.
Next week is showdown week for the league with St. Helena traveling to Fort Bragg and Cloverdale going to Middletown.

NCLII
St. Vincent 40 Tomales 6
SATURDAY
Calistoga (0-6, 0-2) at Upper Lake (0-6, 0-2)
CAL PREPS PROJECTION: Calistoga by 10
After the first weeks scores, it appeared the best chance for some suspense in the league race was in the St. Vincent-Tomales game.
Maybe next time.
George Sammon rushed for 237 yards and two touchdowns to lead St. Vincent to a 40-6 win over Tomales.
Wiily Lepori, who rushed for 142 yards, scored the game’s first touchdown to give Tomales the lead.  After that it was all St. Vincent who had a 21-6 lead by halftime.
St. Vincent will host Tomales again to end the regular season.