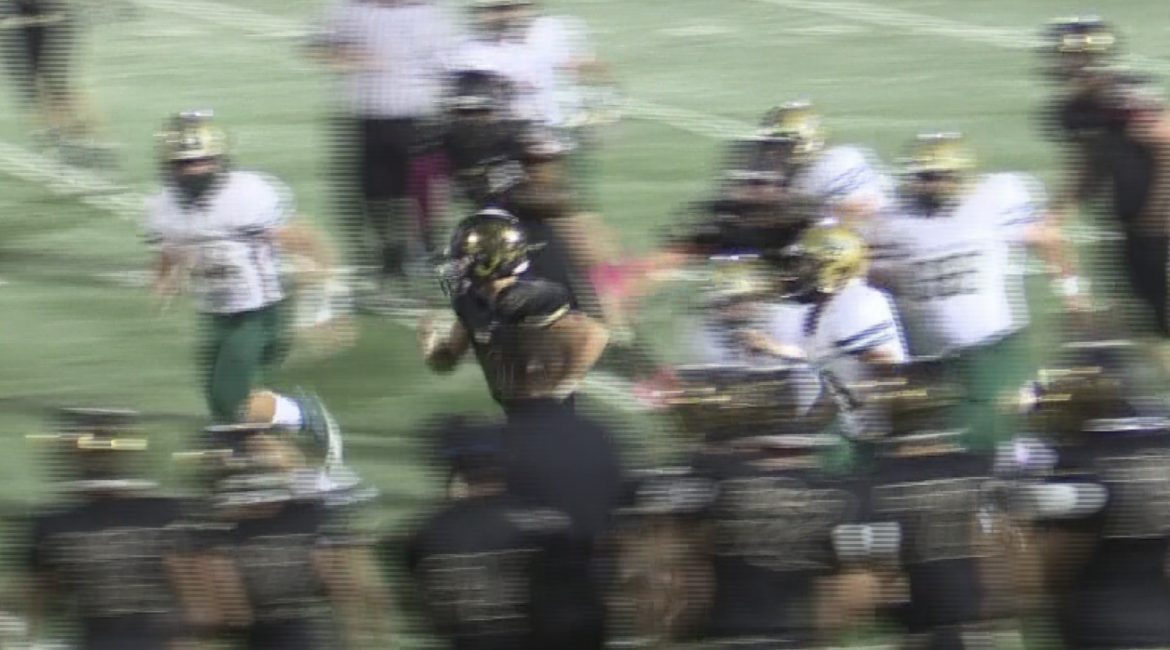 The season reaches the halfway point and two teams make it to 5-0.
We are also set up for two major showdowns next week in the NBL and NCL I while Analy continues to dominate the SCL.
NORTH BAY LEAGUE
No. 2 Windsor 27 Casa Grande 7
No. 3 Rancho Cotate 42 Montgomery 20
No. 4 Cardinal Newman 42 No. 6 Maria Carrillo 28
Santa Rosa 14 Ukiah 7


Windsor is one of two teams in the area to make it to 5-0 after pulling away from a pesky Casa Grande team 27-7.  Jalen Roman threw for 252 yards and three touchdowns and also rushed for 60 yards and another score.   It was a typical game for Roman who is taking the early lead as NBL Player of the Year.   Passing and rushing combined he has at least three touchdowns in every game.    The 252 yards is his best passing game of the year.
Windsor carried a 14-7 lead into the third quarter when Roman threw for one and ran another one in.
As good as the Windsor’s offense has been this season, and it has been averaging nearly 40 points a game, the defense has been better.   They have allowed ten points or less in the four of the five wins.
The Jaquars are one of three teams that are 2-0 in the NBL race.  The other two, Cardinal Newman and Rancho Cotate are set up for a showdown next week.
Once they started winning, it has been the same story for Rancho Cotate.   The winning streak is three and all three have been one sided including the 42-20 win over Montgomery.
Rancho Cotate jumped out to a 28-0 second quarter lead.   Carlos Franco scored all four touchdowns, three of them as a running back and the last one as a defensive back returning an interception for a score.  Franco had scored three touchdowns on the season going into the game.
It was homecoming at Rancho Cotate and a game that didn’t seem to want to end.   The game lasted over three hours.
Meanwhile it was hard to say what was stranger in the Cardinal Newman-Maria Carrillo game, the halftime score or the final.   Actually the final sounds normal as Cardinal Newman took a 42-28 win.  The halftime score was 6-6.
Maria Carrillo actually took a 21-14 lead in the third quarter when Walker Rotherham threw his third touchdown pass.   That would be the last offensive touchdown for the Pumas and they didn’t get the defense out on the field with the lead.   That is because Kasey Mansen returned the kickoff for the score to tie the game.  Moments later, Jordan Brookshire ran in his second touchdown of the game and Cardinal Newman had the lead for good.
That doesn’t mean the suspense was over.
It appeared to be when Brookshire rushed for touchdown number two to make  35-21 midway through the fourth quarter, especially when Cardinal Newman got back the ball and Lucey broke a 50 yard run to the Maria Carrillo 30 yard line.   But on the next play, Maria Carrillo forced one of its five fumbles and Isiah Kohne returned it 65 yards for a score and it was a 35-28 with 3:25 left.
Once again that didn’t last long.  One the next offensive play, Brookshire went 47 yards to put things away.
It ended up being quite a game for Brookshire and Lucey who combined for over 400 yards rushing.   Brookshire rushed for 245 yards, his second over 200 yard rushing game of the season.
Next week:  Cardinal Newman at Rancho Cotate.
For Maria Carrillo they have lost two close games to start league play.   Next week they host Santa Rosa.
Santa Rosa will be feeling good after snapping a nine game league losing streak and a twelve game streak overall by defeating Ukiah 14-7.   After trailing at the half 7-6, Santa Rosa took the second half kickoff and then drove for the only score of the second half with Devonte Manning going over from four yards out.

SONOMA COUNTY LEAGUE
No. 1 Analy 55 Sonoma Valley 20
Petaluma 23 Piner 12
Healdsburg 54 Elsie Allen 12
El Molino BYE
It is safe to say Analy enjoyed being back in Sonoma County.   A week after the disaster in the East Bay, the Tigers league opener went like the other three games they played in the county, as they were ahead big by halftime and coasted in for a 55-20 win over Sonoma Valley.
Will Smith threw two touchdown passes and Kerr Johnson returned a punt for one score and caught another one.  The scoring winner was Ja’Narrick James who rushed for three, including a 77 yard run that ended the first half scoring.
Analy and El Molino at 1-0 in league play are the only two teams left undefeated in the SCL race.
The battle for second continues to be intriguing.
The 54-12 win by Healdsburg over Elsie Allen was the Hounds first win of the season.
There was one close game in the SCL.  That was the 23-12 win by Petaluma over Piner.
Piner went into the fourth quarter with a 12-10 lead.   Petaluma took the lead for good when Quarterback Brandon White scored his second touchdown from five yards out with 10:34 left.
That was part of a big rushing game for Petaluma.  Yusef Kawasami did most of the damage rushing for 192 yards, which included the final score of the game, with three minutes left.  It is the second time in the last three games that Kawasami rushed for over 100 yards.
Piner was kept in the game by two first half touchdown passes by Tony Maritgnol, which was part of a 181 yard passing night.  He also rushed for 82 yards.
If the race goes as expected it looks like a heck of a scramble for second place.  Healdsburg, Petaluma, Piner and Sonoma Valley are all 1-1 in SCL play.  Give El Molino and Sonoma Valley the edge on that.  El Molino because they have no league losses, but they still have to play Analy.   Sonoma Valley’s league loss is to Analy, but Petaluma and Piner still have Analy on the schedule.  Piner has them at home next week.

NCL I
No. 7 St. Helena 48 Lower Lake 14
No. 8 Middletown 28 No. 10 Fort Bragg 19
Kelseyville 21 No. 9 Cloverdale 14
Willits 32 Clear Lake 8
The NCL I race has some balance to it.
That is when you take away St. Helena.
The Saints easily raised their NCL II record to 2-0 with a 48-14 win over Lower Lake.   After Lower Lake fumbled on the first series, Jahaiver Otero went 32 yards for a 7-0 lead, less than two minutes into the game.  It was the first of two touchdowns for Otero, who rushed for 103 yards on then night.
Otero wasn’t St. Helena’s leading rusher, that honor belonged to John Wheeler who went for 105 yards and two scores.
St. Helena led 41-0 after three and is 5-0 on the season.   It was win No. 50 for Coach Brandon Farrell at St. Helena.
The Saints have started league play with two one sided wins.   Next up is the big test, when they host Middletown who is also 2-0.
The way the game started it looked like the NCL I was going to have a different personality.  The defending league champions fell behind Fort Bragg 13-0 in the first quarter, before rallying to a 29-13 win.
Kailor Sullivan passed for 293 yards and the two touchdowns for the early lead.  He would throw two more touchdowns, but they were scored by Middletown.   The first on a 30 yard return by Antonie Guzman.   It was Guzman’s second touchdown of the game.  Earlier he ran one in from 60 yards out and Middletown had a 14-13 halftime lead.   Guzman had a 185 yard rushing night and scored another touchdown for the first score of the third quarter.
The second interception return came moments later when Wyatt Hatt took one 63 yards to make it 28-19.
There would be no big comeback for Fort Bragg this week.   Last week they rallied from a 28-7 deficit to edge Lower Lake 29-28.
Middletown has won four straight since the opening game loss to Salesian.
Kelseyville bounced back from its first loss of the season with a hard fought 21-14 win over Cloverdale.   Robert McLean went 23 yards with three minutes left to break a 14-14 tie.  McLean rushed for 153 yards on 25 carries.   The score came moments after Cloverdale had tied the game 14-14.
Noal Lyndall threw two touchdown passes for Kelseyville.
Cloverdale, who was playing its first home game, drops to 3-2 on the season.
Santa Rosa wasn’t the only team in the area to snap a long losing streak.  Willits snapped a nine game NCL I losing streak with a 32-8 win over Clear Lake.
It was closer than the score indicates.   Willits carried a 14-8 lead into the fourth quarter before scoring a safety and then returning the free kick for a score to put it away.
Both teams are now 3-2 on the season.   Clear Lake is 0-2 in league after a 3-0 start.