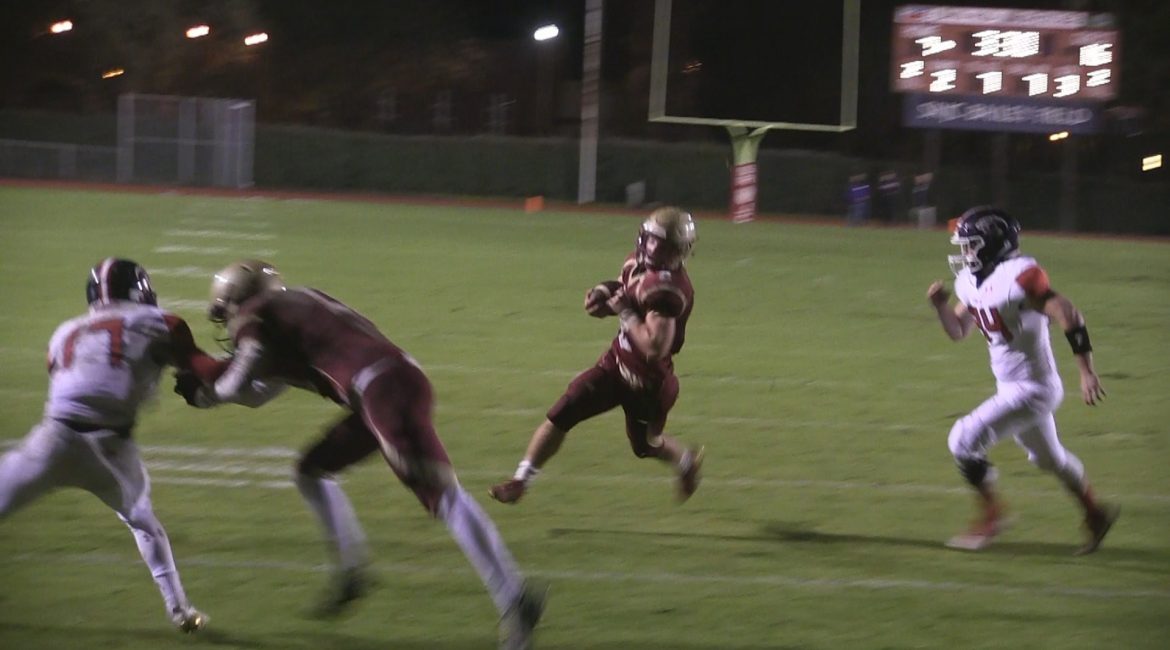 By Griffin Epstein
While the Rancho Cotate and Cardinal Newman NCS semifinal game at SRJC’s Bailey Field will be remembered for the controversy late in the game, it should be celebrated as coronation of a great series between these two teams. After Rancho won the initial game between the two this year, longtime Newman Coach Paul Cronin and his talented team made adjustments in the NBL Championship game, and the Cardinals pulled out the victory 34-27.

In the game of cat and mouse, Rancho coach Gehrig Hotaling responded with his own adjustments in these teams’ third and final matchup. The Cougars looked motivated and ready for the Cardinals the first half at Bailey Field. While controversy ensued late, the Cougars could have nearly put away the game in the first half if not for some self-inflicted wounds. A missed extra point and missed field goal led to Rancho going for it on a fourth down in the red zone where they did not convert. With the Newman offense shaky a pick six gave the Cardinals their only points, and they went to the locker room only trailing 12-7. This score could have easily been 24-0 Rancho.
When the game became a barnburner of offense in the second half it was too late for the Cougars to cruise past the Cardinals into the NCS championship game. Coach Cronin had exploited the Cougars struggling secondary by the second half with quarterback Beau Barrington burning the Cougars multiple times downfield, helped by Rancho missed tackles. By the time it was late in the fourth quarter and 22-22, the game had turned into everything a sports fan wanted with completely packed stands roaring, the Rancho band playing, and everyone on the edge of their seats.
Then, Jake Simmons, the senior Cougar quarterback, who had methodically picked apart the Cardinal defense all night long found his speedy wide receiver Jaelen Ward. With under three minutes left and a Newman offense that had moved methodically all night, Ward ran diagonally along the goalline trying to run as much clock as possible. One Newman defender fell and the rest of the Cardinals had stopped chasing Ward. He turned and waited at the goaline continuing to run clock for another five seconds until finally a Newman defender got close to him. Video shows that Ward was making no taunting sign or acting in anyway inappropriate as he turned and waited at the goalline. However, the referees, who already dealt with a skirmish late in the first half, likely felt the need to control the game and called an unsportsmanlike 15 yard penalty. With this penalty, struggling Rancho kicker Andrew Alfaro now had a much more challenging extra point that he badly missed. Rancho fans were outraged, and Newman fans felt the call was justified.

In the ensuing drives when Newman’s Barrington found wide receiver Kyle Carinalli for the game winning touchdown and a final attempt for the Cougars fell short, the feelings on both sides were only further pronounced. Coach Hotaling reportedly had some choice words for both Coach Cronin and the referees after the game. While Rancho fans might want to blame another painful loss to Newman on the controversial penalty, the Cougars missed first half chances, kicking problems, and secondary issues truly cost them the game.

However, immense credit has to be given to Newman for continuing to show remarkable resolve both on the football field and in life after the North Bay fires destroyed most of the school and many of the players’ homes. The Cardinals half-time adjustments were key and while they may have not outplayed the Cougars their effort and spirit shined through. A key example was that of Cardinal running back Tanner Mendoza who on multiple Cardinal drives meticulously grinded out yardage through a fierce Cougar defensive line.
The Cougars fantastic season ended painfully, especially with their losing so many key seniors. Meanwhile, the Cardinals have a chance at a remarkable NCS title next weekend. Fans should remember Newman-Rancho III for everything a high school football game should be between two great teams.