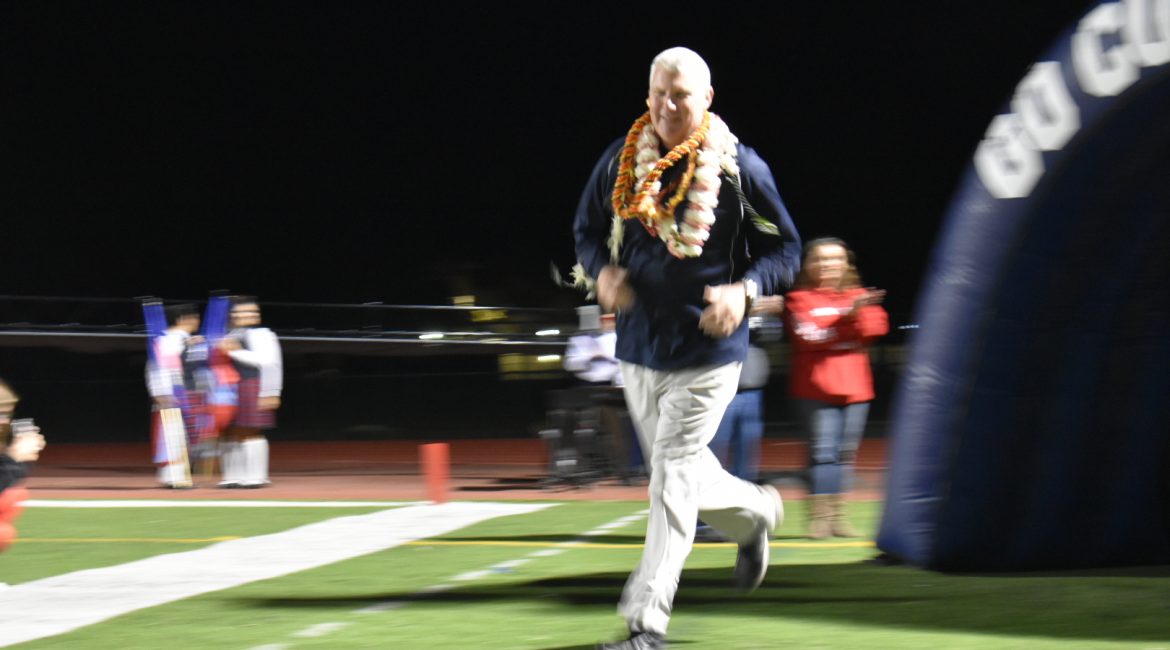 By Dale Watkins
The bittersweet end of an era would descend upon Rancho Cotate High School, as legendary Cougar head coach Ed Conroy was honored pregame before he would coach in his final game of an illustrious 31-year career.

One game would decide it all, as the 6-0 Cardinals and the 6-0 Cougars would collide Friday evening in what would be an epic winner-take-all showdown for North Bay League supremacy. In an exhilarating back-and-forth game where the teams would constantly trade punches, it was Cardinal Newman who emerged victorious in the end, surviving a late scare by the Cougars to triumph in overtime, 35-34. Truly one for the ages.

Rancho drew first blood midway through the 1st quarter, as a 38-yard completion from QB Jake Simmons to Jaelen Ward would set up Simmons just shy of the endzone. Simmons then jumped over the pile and reached the ball over the goal-line to put the Cougars up 7-0. Cardinals quarterback Jordan Brookshire headlined a scoring drive with numerous keepers for huge yardage, picking apart the Cougar defense all the way downfield. He would then score in the same fashion Simmons did, launching himself over the pile and tumbling into the endzone to even the score with 7:10 left in the 2nd quarter.

At the end of the half, driving down the field, Kyle Carinalli bobbled and dropped a 40-yard pass from Brookshire that would have been an easy touchdown. Nonetheless, the Cardinals got into great field position and sent out Jack Murray to attempt a 41-yard field goal. Ed Conroy pulled out his bag of tricks and called timeout to try to ice Murray and it worked, as Murray would then miss wide left as the first half ended.


Michael Daly would kick off the second half of play with an impressive 22-yard catch-and-run for the Cardinals, bouncing off several tacklers. Star running back Tanner Mendoza then gave Newman a 14-7 lead by finding a big hole, rushing into the endzone untouched for a 1-yard score. The Cougars responded instantly, as AJ Vallejos picked up 56 yards on his own catch-and-run to put Rancho in business inside the 5-yard line. The big fella, Tanielu Guerrero, finished the job and bolted 4 yards right up the gut to make it 14-14.

Rancho’s Mason Heinse would intercept Brookshire to begin an exciting 4th quarter of action, as Newman committed their first turnover of the night. Jake Simmons handed it off to Peyton Whetstone on their very first play, as Whetstone blasted straight up the middle and into an open field, leaving behind the entire Cardinal defense in his wake. A resounding 65-yard touchdown run that seemed to swing momentum entirely in the Cougars’ favor.

But it was Jordan Brookshire who would put the team on his back, running like a man possessed as a usually-stellar Cougar defense was just taking a beating. It was all Brookshire on this particular drive, capped off with a 1-yard plunge through the pile to tie the game at 21 all with 4:47 remaining.

The ensuing Rancho possession would result in a failed 4th down conversion as Simmons (also the kicker) faked the punt and tried to find Ward cutting across the middle, but Jason Moran knocked the ball loose with a big hit on Ward. Newman got the ball back and Brookshire continued to wreck havoc on the ground with a 20-yard gain avoiding a number of tackles. Damian Wallace took the sweep pass and burst it to the outside for the go-ahead touchdown.
With just two minutes to go, it was crunch-time for the Cougars, in dire need of 7 points. Jake Simmons would answer the call, as he reared back and catapulted one down the sideline to a streaking Logan Reese. Reese would leap and snag the pass right over the outstretched arms of Damian Wallace, manage to stay on his feet, and then jogged into the endzone for an emphatic 70-yard game-tying score. It was 28 apiece and we were headed to overtime!

Each team would get a possession from the 10-yard line, as Newman would receive the ball first. Jordan Brookshire would keep it himself on the first play and not be denied, bulldozing over a Cougar and into the endzone. Jack Murray’s extra point would make the score 35-28.

It was now the Cougars’ turn, and Jake Simmons would hit AJ Vallejos on a slant route to score on their own first play from scrimmage to make it 35-34. But the raucous capacity crowd got up on their feet as they saw Ed Conroy keep his offense on the field, electing to go for 2 and the win. Conroy would not have it any other way.

A false start penalty would move the Cougars back to the 8-yard line, making the potential game-winning play even more risky. Simmons would then take the snap, roll out to the right, scramble, and target a wide-open Logan Reese in the back of the endzone. But the pass was underthrown and bounced just short in front of the diving Reese; the gutsy gamble had backfired. The Cardinals would erupt in jubilation as their fans stormed the field. Cardinal Newman is your 2016 NBL champion!

Jordan Brookshire proved to be a man amongst boys, playing his best game when the stakes were highest. Willing his team to victory, he ran the ball a gargantuan 48 times for 296 yards, to accompany his 142 passing yards completing 12 of 23 attempts. Brookshire endured hit after hit after hit by a rugged Cougar front-line frequently running the ball, led by star sophomore Elias Rantessi. He’ll definitely be feeling this one in the morning.

The NCS playoff seeding meeting is this Sunday, as Empire teams like Rancho and Newman will head their separate ways in divisional brackets.