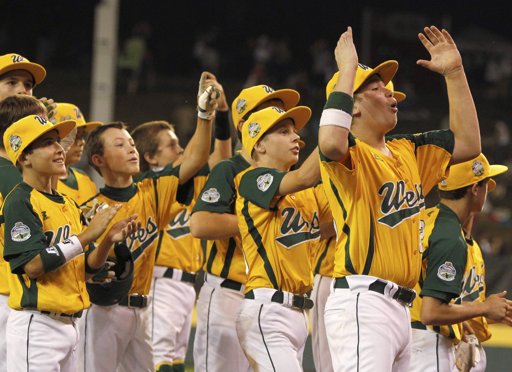 With all the events that take place during a school year it is hard to narrow down a top five.

Analy taking the Sonoma County League Championship in baseball, basketball and football.  Not only winning but going undefeated in all three for a combined record of 30-0.

Championship night during the football season with the league titles decided in the NBL, SCL and NCL I on the same Friday Night.

The SRJC Baseball team, Cardinal Newman vs. Marin Catholic and the NBL Girls Basketball race just to name a few.

These stories and a few others could have been in the top five in a normal school year.   That is if it wasn’t for a story that blindsided everyone and fired up this area more than any local team has done.   The story is a clear cut choice for No. 1.

THE NO. 1 SPORTS STORY OF THE 2012-13 SCHOOL YEAR:  THE PETALUMA NATIONAL LITTLE LEAGUE TEAM RUN TO THE LITTLE LEAGUE WORLD SERIES

Calling this the best sports story of the past school year might be a bit of a stretch.  Most of the twenty four game journey to the hearts of the people in the area, were played school began. The team did play some games the first week of the school year, but by then, the No. 1 story had been decided.

The story took fifty eight days. It started in Sonoma County in front of the family and friends, and ended in Pennsylvania in front of a packed house and a national television audience.

If you were on the YSN facebook page when things started gaining momentum, you knew that something was brewing long before the bandwagon became standing room only.   The “likes” involving Petaluma National were breaking records on the YSN page, before the story was a BIG story.  Once they became the BIG story, the page set records that the officials of this website dream of being broken someday.

This was the second game of the Western Regional in San Bernardino.  Petaluma National had already made history of sorts, being the second team from Sonoma County to make it this far.   The first was Petaluma Valley in 1995, in a tournament that has been going on since 1957.

Southern California was considered the team to beat and took a 2-1 lead into the sixth.   Petaluma National scored two unearned runs with two outs in the bottom of the sixth to take a 3-2 win.  The tying run scored on an error that would have been the final out of the game and then Cole Tomei hit an RBI single to win it.

No. 4…Winning The Nor Cal Championship

Most of the media still hadn’t mentioned the word Petaluma National and they almost didn’t get the chance to.   They were the last undefeated team involved and were closed to winning the tournament without a loss.

San Ramon kept the momentum going in the “if necessary” game, scoring in each of the first four innings and took an 8-1 lead.  Petaluma National was six outs away from being eliminated.

Then came a magical fifth inning in which Cole Tomei started the scoring in the inning with a two run homer and ended it was a two run double that tied the game.

San Ramon came right back to score three in the seventh to take an 11-8 lead and the Petaluma National story was now three outs away from being finished before most really noticed.   There were people noticing.  You only had to see our Facebook page, which was rocking that day, to know that. The page really rocked when Kempton Brandis hit a two run homer to tie the game at 11-11.

An inning later Bradley Smith had a walk off single to give them a 12-11 win.  This game was remarkably similar to the Casa Grande win over College Park in the NCS playoffs seven months later.   Each game had the same kind of double rally and the same final score with the team from Petaluma winning.  As it turns out, if it wasn’t for the remarkable run by one Petaluma team at the beginning of the school year, the remarkable run by another Petaluma team at the end would have been the No. 1 story.

No. 3…World Series Walk off

This was Game three in Williamsport and the first of what would be four elimination games that were played in six days.

After falling behind 2-0,  Hance Smith’s two run single capped a three run third and Petaluma National carried a 4-2 lead into the sixth.

The opponent was New Jersey and they showed some dramatics, scoring two in the sixth to tie the game.  It looked like they were going to take the lead if it wasn’t for third base coming through for Petaluma National team for the second time of the playoffs in a different kind of way (see story No. 1 for the other time).   On the base hit that tied the game, while trying to score the lead run, the runner slipped as he touched third and was thrown out trying to get back.  That was the first out of the inning and had he gotten back, the bases would have been loaded.   Of course had he not slipped it would have 5-4 New Jersey and Petaluma National would have had another one of those do or die innings.

The game went into the night inning when leading off, Danny Marzo hit a 0-1 pitch over the right field fence for a walk off winner.

Marzo, who led the team in homers, picked a good time to hit his first homer of the World Series.

In the US Championship game against Tennessee, it appeared that Petaluma National was going down because of a record breaking performance.   It turned out that they did, but not before an epic comeback.

It was a game that Petaluma National trailed from the start.   They trailed big after a six run third in which Butler hit his first homer to make it 8-1.   After that, Petaluma National would inch closer to at least give the impression they were getting back in the game only to see Butler ruin the rally with a three run homer.  The third came in the top of the sixth and looked like frosting on the cake as it gave Tennessee a 15-5 lead.

Then came the rally that blindsided everyone as much as this team did.  It started out like a nice little inning, which had the looks of a team that didn’t go down without a fight.

Petaluma National was one out away from ending the dream of the Little League Championship.

They had scored six runs to make it a respectable 15-11 score.   It was then 15-12 when Bradley Smith hit a run scoring double.   That set up the dramatics of back to back homers, on 0-2 pitches no less, that tied the game.   The first homer was by Kempton Brandis, the second by Hance Smith.

That turned out to be the last dramatic moment for Petaluma National.  To its credit, after the gut punch of the bottom of the sixth, Tennessee scored nine in the top of the seventh to take a 24-15 and advance to the championship game.

No. 1…The Missed Bag

By this time the bandwagon had standing room only.

The game was against Hawaii and it was on a Saturday Afternoon, the second game that the team was playing on ESPN.    There was no room for error, even though Petaluma National was 5-0 and had beaten Hawaii in the opening game of this regional.   Winner goes to the Little League World Series, the loser goes home.

It was a game that started gut wrenching, then looked like a breeze that turned into a scared feeling when Hawaii made a big rally in the sixth that ended in a way you just don’t see happen.

After trailing early, a four run fourth gave Petaluma National a 7-4 lead into the sixth.  Andrew White was on the mound for Petaluma National.    He was the Brian Wilson of the team, or to update things the Sergio Romo, coming in late to hold onto leads and get the save.  He was doing it in this one, pitching two innings going into the fateful sixth with a 7-4 lead.

It looked like a routine variety save with two down and a runner at first.  Then came a single and the potential tying run was coming to the plate.   He hit a single that took a weird hop and rolled to the fence.  Two runs scored and now it was a 7-6 game and a runner at second.

The way this run had gone it had to be this way.   That doesn’t mean it had to end up good.  Two of the four losses were sixth inning rallies by an 8-7 score.

Then came the unexpected.    As we waited in anticipation for the next pitch, Petaluma National Eric Smith went out to the mound to try to calm things down.   Smith had a microphone attached, so we got to hear the replay of that moment.   Usually those replays seem like a waste of time, but this time we heard how the discussion turned from calming things down to the runner missed third base.    One of the players during the meeting suggested that and after briefly going over things on how to appeal Smith’s last words were “otherwise settle”.

The appeal was made and shockingly the umpires ruled the base was missed and the game was over and Petaluma National was going to the Little League World Series.

The ten run rally could have snuck in as the No. 1 moment.  But since that rally did just that, snuck up on everyone, it was moved to No. 2.  Let’s face it, most of us who stayed to watch that ten run rally were doing it just to be with them during the last three outs of the game.

Leading to the No. 1 story we were hanging on every moment.

The day after the US Championship game, Petaluma National defeated Latin America 12-4 to take third place.

Even if you don’t agree with the Top Five moments for Petaluma National, you have to agree it got the areas attention.

After going 24-4 and coming home they had a parade in downtown Petaluma. No. 5—Cardinal Newman vs. Montgomery at SRJC