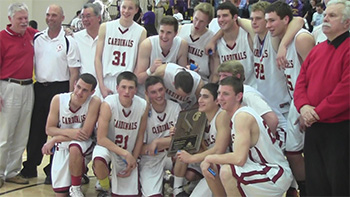 The No. 4 sports story of the school year was Rancho Cotate and its undefeated football team.  Undefeated that is until the North Coast Section Championship game.  Since the East Bay has involved in the North Coast Section playoffs, which are the way things usually turns out.  A local NCS champions just isn’t in the cards, at least most of the time.

Of the forty one section champions for Basketball, Baseball, Football, Softball, Swimming, Tennis, Track and Volleyball, five were from our world.  Four of the five were from the small school world—Rincon Valley Christian in basketball, Tomales in baseball, St. Vincent in softball and Anderson Valley in Volleyball.  The only large school to win a section title was the Santa Rosa Girls in track.

There was one team that didn’t win the North Coast Section Championship, but made it to the State Championship game.

THE NO. 3 SPORTS STORY OF THE 2012-13 SCHOOL YEAR…CARDINAL NEWMAN BASKETBALL HAS A RECORD SEASON

The Cardinal Newman basketball team being on this list isn’t a surprise.  This is a program that has won at least twenty games in seven of the last eight seasons.  During that time they won six North Bay League championships and four of the NBL post season tournaments that followed.   During this span, they went undefeated in league play three times and over the past five seasons they have a 64-6 NBL record.

The NBL record included last season and they went undefeated.  The run through the NBL race was routine except for the two games against Montgomery.

Those two games had different personalities.

In the first game, Cardinal Newman led most of the way and withstood a Montgomery rally that tied the game in the last two minutes before taking a 52-48 win.

In the second game it was Cardinal Newman who had the big rally.  Big is an understatement. Montgomery had an 18 point lead early in the third quarter.  Cardinal Newman rallied to take a 57-54 win and that decided the NBL race.

Cardinal Newman won the other NBL games by at least ten points.

That is only part of the reason why Cardinal Newman is the No. 3 sports story of the school year.  As the stats showed they have done that to the NBL before.  It is what they did the whole season that got them the No. 3 story.

In the four years they made the State Championship games they lost the NCS title game.  That includes this year when they lost to Salesian 65-34.

Along the way Cardinal Newman head coach Tom Bonfigli, who started his coaching career at Cardinal Newman in 1980, collected his 650th career win.  That includes over a decade as head coach at Justin Siena. He was also named Cal Hi Sports Division 4 State Coach of the Year.

That wasn’t all the awards the team got.

Corey Hammell, who was the team’s leading scorer and averaged a double-double, was named NBL player of the year and second team All-State by Cal Hi Sports.  Kenny Love and Tim McCullough were named to the first All-League team with Kyle King named to the second team.  It was a team that prided itself on defense and McCullough was also named NBL defensive player of the year.

Cardinal Newman seems to always have a good basketball season.   For now on whatever kind of good season they are having will be compared to the 2012-13 season, the No. 3 Sports Story of the school year.

No. 5—Cardinal Newman and Montgomery move its basketball games to SRJC

No. 4—Rancho Cotate’s undefeated run to the NCS Championship Game