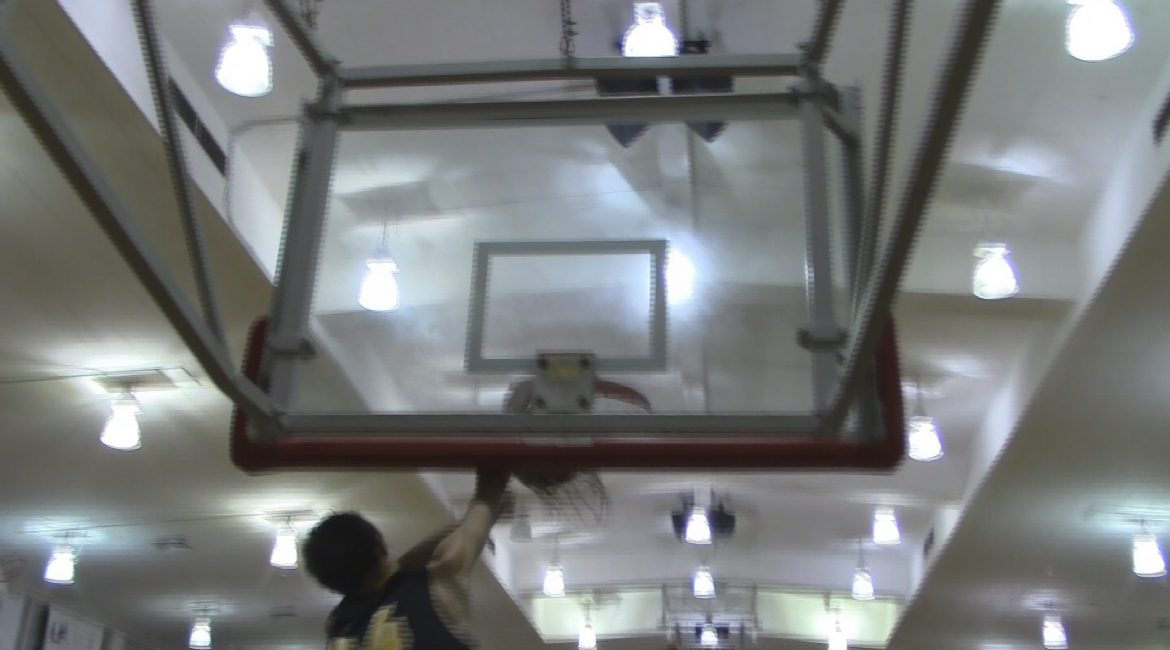 This time of the high school basketball season it is all about surviving and worry about how later.

The Montgomery Vikings Boys basketball team did just that, getting some breaks in the last thirty seconds and were still briefly holding their breaths as a three point shot that would have ended their season, turned out not to be close and they move on to the second round of the Nor Cal playoffs.

Montgomery defeated Del Oro 53-51 in a game they didn’t trail from the midway point of the first quarter, having as much as a ten point lead in the third quarter.  A couple of things helped to make it a close game.   One, the Vikings leading scorer on the season and this game, not to mention the NBL player of the year, Alec Raven was in foul trouble.  Maybe more important is that Del Oro is a pretty good team and probably was undervalued as far as the seedings go.

The ten point lead was early in the third quarter after Montgomery scored the first five points to make it 37-27.   By the end of the third quarter, Del Oro had cut the lead to four and pulled even twice in the fourth quarter, the last time with 4:10 left.

Montgomery led the rest of the way, the biggest lead was four and they got that with :30 left when they got their first break and took advantage of it with a big time shot by Noah Orlik.    Nursing a one point lead, Orlik had the ball batted away and it was headed towards the back court.   He made a desperate save before it went in the back court, although he probably didn’t have to since it was batted by a Del Oro defender.   Either way the shot clock was running down, so he threw up a three pointer and buried it to make it 52-48 with :30 left.

The sigh of relief was short lived when Del Oro, as they had all night long, came right back.  Danny Becker hit his fourth three pointer of the night to cut the lead to 52-51 with :14.9 left.  It was part of a 14 point night for Becker, which was match by Kyle Setterlund for team high.

Del Oro had to foul twice to get Montgomery into the bonus and to the foul line with 11.2 left.   Alec Raven scored the last of his game high 18 points, hitting one of two free throws to make it 53-51.

After Del Oro moved the ball into the front court they called a time out with 6.2 left.  In those final desperate seconds Montgomery got two breaks.   The first was Del Oro losing control of the inbound pass and which was deflected deep into the back court.

Next came break No. 2.   The Del Oro coaching staff was trying to use its final time out, it wasn’t seen by the three official crew.   Becker gained control and raced as far as he could before letting go a 35 footer as time ran out.   The shot was short and the Vikings had survived.

Montgomery had control the first half.  After the four lead changes and three ties in the game’s first four minutes, a three point shot by Sam Averbuck, one of his three in the first half, turned out to be the last lead change and started an eight point run which gave the Vikings a 14-8 lead.

For most of the rest of the way, it was as big as Montgomery’s lead would be and as close as Del Oro would make it.   The reason for that had a lot to do with Raven.  After a big first half, in which he scored 13 points, Raven picked up foul number four during the run that Del Oro got back into the game.  Montgomery was held to six points in a nine minute period of the second half and Del Oro was able to tie the game with 4:50 left setting up the frantic finish.

Del Oro also was hurt at the foul line in missing five of six free throws in the first half, in a game that was basically foul free (except for Raven).    The officials let them play with the teams combining for 17 free throws for the game and four in the fourth quarter.

Del Oro ends the season 28-3, with its three losses by a combined seven points.

For Montgomery, they go to 26-6 and live for another day.  That “another day” is Saturday when they go on the road to meet No. 4 Serra on Saturday at 6 pm.

Three other Girls teams,   Santa Rosa, Cardinal Newman and St. Vincent also advanced to the Nor Cal 2nd round.    All three schools won a Nor Cal game for the first time.

Santa Rosa won in front of a sold out crowd at North Salinas in which according to a contact, was filled an hour before the game and was the loudest gym he has ever heard.

That loudness was probably in the first half as Santa Rosa dominated the second.  A 19-3 run to start the quarter wiped out a 27-26 North Salinas lead.  After that it was all Santa Rosa in a 67-44 win.

Everything was working for Santa Rosa.   Morgan Bertsch: 27 points, 21 rebounds and seven block shots, Devin Murray: 16 points, half of that in the big run,  Kylie Oden hit five 3’s for her 15 points and Katie Daly back from her concussion ran the show scoring four points, but also had nine assists and 5 steals.  Santa Rosa scored 28 points in the third quarter.

Santa Rosa, who is now 28-4 on the season, will be at No. 1 Deer Valley on Saturday.   Santa Rosa defeated Deer Valley in December.

It was a game broadcast here at YSN365.com and you can hear the podcast.

The other winner was St. Vincent who defeated Ripon Christian 46-33.  They also controlled the second half, after having a two point halftime lead.    It was the pattern for the night, a nice start to the third quarter to take control.   This run was 13-4 to give St. Vincent a double digit lead.   As close as Ripon Christian got the rest of the way was six.

St. Vincent is 26-7 at will travel to No. 4 Eastside College Prep of East Palo Alto on Saturday.

All the game times for Saturday are 6 pm.

It wasn’t all wins for the local teams, as the Girls teams of Analy, Windsor and Ukiah all lost.   Two of the three games weren’t close.

Windsor and Analy were both twenty points plus down by the half.   Windsor ends the season 20-10 while Analy finishes 19-12.

Ukiah came close but finishes 14-15 after losing to Chico 50-43.   Ukiah led 32-26, but gave up the last seven points of the third quarter to fall behind.   It was 42-41 entering the last minute when Chico scored five straight to take control.

There will be a preview of all the Nor Cal second round local games and let’s not forget about SRJC in the State Final Four, which will make for a busy Saturday.