NOR CAL PLAYOFFS: IT COMES TO AN END FOR CLOVERDALE 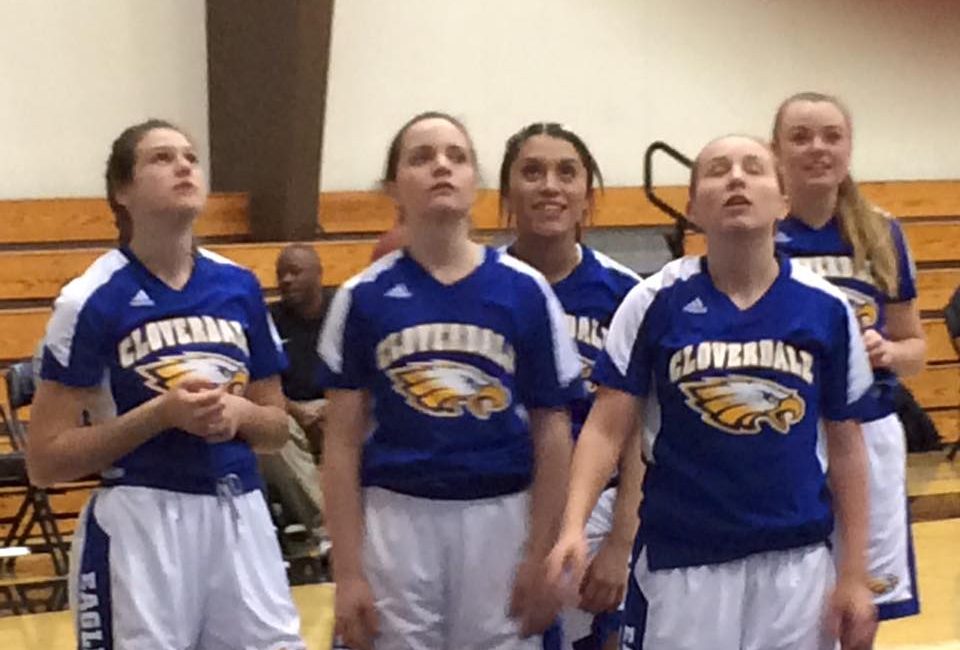 When you get to this stage of the High School Basketball season you see teams that you probably haven’t seen before.  So during warmups you check them out and match them up in your mind and try to guess what is going to happen next.
When matching up Cloverdale and the Woodside Priory team one thing was obvious. Woodside Priory was bigger, and that was at every position. For Cloverdale to have a chance, the thought  was that maybe Woodside Priory wasn’t very talented and got here by being bigger only. They would also need some breaks and shoot the lights out.


None of that happen
Woodside Priory was as talented as they were tall, got most of the calls early and Cloverdale didn’t shoot the ball very well. That added up to a Woodside Priory 58-42 win, and ended Cloverdale’s season 25-8.
Let’s get the “got most of the calls” out of the way. One of the biggest cheers of the night for the sizeable Cloverdale fans who made the nearly three hour trip on a rainy Saturday afternoon, was a foul called against Woodside Priory in the first minute of the second quarter. It was the first foul of the game that wasn’t called against Cloverdale. All six fouls in the first quarter were called against Cloverdale.
It seemed like the game was being called differently on each end of the court. The frustration rose to a higher level about five minutes later when Karsyn Stewart was knocked out of the game with a concussion. On that play, she was called for a foul. She watched the game from the bench in the second half with a dazed looked on her face. She also had a big size bump on her head and looked like she had been on the wrong end of a barroom fight. On Sunday, she was doing better, but did have a little headache.
The way the game was called changed after that and set up an almost unwatchable third quarter, in which the two teams were called for a combined 18 fouls and shot 18 free throws.
Saying all of that, the result probably wouldn’t have changed. Cloverdale was dominated on the boards and at times couldn’t get a rebound. Two minutes into the game, Cloverdale had been outrebounded 7-1. All seven rebounds were on the offensive end, after Cloverdale had hit its first two shots to take a 5-2 lead. On the next possession, Woodside Priory had five straight shots on one possession before scoring. There would be several possessions like that. After one quarter, Cloverdale was out rebound 16-5 and after three quarters the difference was 42-17.
After Cloverdale took the early 5-2 lead, they didn’t score again in the first quarter. It says on the roster that Center Tataina Reiss is 6’ 4”. She seemed taller than that and in the first quarter alone she scored eight points and collected five rebounds. Reiss scored eight of her 14 points in the last five minutes of the first quarter to help make it a 17-5 game. Cloverdale scored on a three point shot by Camryn Figueroa to start the second quarter to cut it to 17-8. That would be the last time they would have the lead under ten.
Despite the one sided edge in rebounding there were actually a couple of moments of hope. One was late in the first half. Teanne Edens scored back to back baskets to cut the lead to 27-15. It was part of a team high 14 for Edens. Cloverdale has two chances to get even closer, but couldn’t connect. Woodside Priory then scored the last six points of the half, four of them on free throws.
Cloverdale made a little run to start the third quarter with Edens hitting two 3’s to cut in to 36-23 with 5:03 left. Next came the unwatchable part with the endless march to the foul line. Thirteen would be as close a Cloverdale got the rest of the way.
The Eagles end the season 25-8, and have the pride of winning a Nor Cal game,  This team will be compared to in future years.
LOCAL NOR CAL PLAYOFFS
DIVISON 4 GIRLS
No. 1 Cardinal Newman 61 No. 8 Scotts Valley 45   WATCH THE FULL GAME
SEMI-FINAL
TUESDAY MARCH 15TH
No. 4 Sacred Heart Prep (21-6) at No. 1 Cardinal Newman (28-5)…7 pm

DIVISION 5 GIRLS
No. 3 Woodside Priory 58 No. 6 Cloverdale 42
My email address is jacpasquini@comcast.net
Share