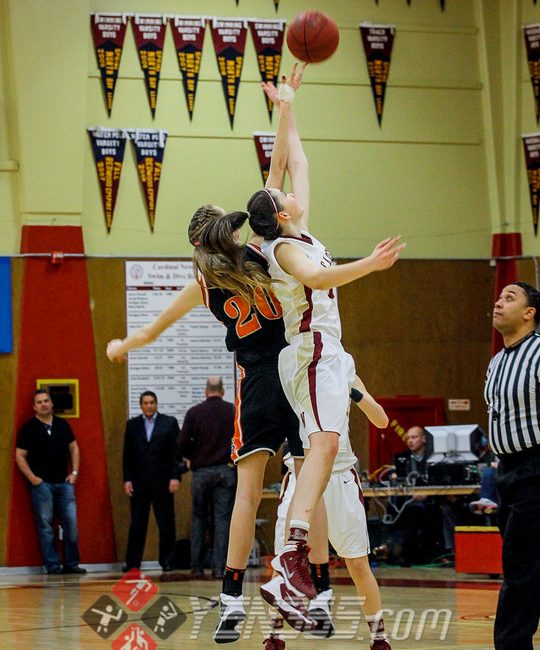 It has been homework time for the local teams as they try to find out as much information about the teams they are playing.

They are also filling up the gas tanks.

Five of the seven teams have a major Wednesday road trip, although, not as long as it takes to get up to the Eureka area.   The average trip is two and a half hours.   The longest trip is a close call between the Santa Rosa and Ukiah Girls who have a three hour trip in different directions.  Ukiah is staying North, while Santa Rosa is heading south.

The shortest trip belongs to the Cardinal Newman Girls, who goes about two hours south.   That is a piece of cake for that team who had a four hour trip to Arcata in the second round of the NCS Division 4 playoffs.

As for the Open Division effects, proof positive that the NCS at least at the top is the toughest section in Northern California.  The Boys and Girls combined have 14 teams in the Open Division, seven of them from the NCS.

The NCS Division 2 Boys champion Newark Memorial team was one.   They were one of three teams from the NCS that was taken to the Open Division on the Boys side in the six team bracket.

For the Girls there are eight teams, the maximum four from the NCS.   Two of those teams, St. Mary’s of Berkeley and Salesian played for the NCS Division 4 Championship.   Those two being pulled up helped Cardinal Newman’s cause for getting in and almost got them a home game.

The North Bay Girls can do some bragging.   They have four of the seven local teams still playing.

We also have a NBL-Del Oro Girl-Boy doubleheader.   Well it isn’t really a doubleheader.  They are being played at the same time and about two and a half hours away from each other.

At the end of each preview a power ranking comparison for each game.   The power rankings don’t always agree with who the higher seed is.

I can’t say I know that much about teams outside this area, but it is pretty obvious North Salinas doesn’t get much respect.  A nineteen game winning streak, which included sweeping their league and winning the section championship.

The two losses by North Salinas might have something to do with the lack of respect.   One was by 36 and the other by 19.   The one by 19 was to Pittsburg on December 27th and they haven’t lost since.  Pittsburg was seeded No. 7 in the NCS Division 1 playoffs and lost to Berkeley in the second round 77-45.

This is Santa Rosa’s second trip to the Nor Cal and first in Division 1.   The first appearance was in 2011.   They were a Division 2 team and lost in the first round in an epic game 84-83 to El Camino.

STATE GIRL DIVISION I POWER RANKING COMPARISON:  Santa Rosa is ranked No.18.  North Salinas is No. 44.

This is no respect part two.  How about a 28-2 record and the lowest seed in the bracket?

Del Oro’s losses aren’t as ugly as North Salinas.   They weren’t that far from an undefeated season.  They lost a one point game to Amador Valley on December 7th.  They then won twenty four straight before losing the Sac Joaquin Section final to Cosumnes Oaks 55-52.

Montgomery found out how much the OT loss to Concord last week hurt.   Although they got a home game, Concord got a No. 2 seed and a first round bye.   Concord lost the NCS Championship game to Newark Memorial, who was moved to the Open Division.

Two of the four NBL teams are in this Division and are the bottom two teams.  In some ways they have it better than the other NBL Girls teams.   True they have to do some travel time, but a win won’t put them up against No. 1.   If fact if things go right and they each win two games, Ukiah and Windsor would meet for the fourth time this season.

That is a few trips away.

The Ukiah and Chico don’t exactly have the record that you expect teams playing this time of the season.

The Northern Section is a little different then what we know here.   They only have two teams in Division 2, Chico and Pleasant Valley.   So they were the Northern Section Division 2 tournament, the one game against each other which Chico won 56-50 so here they are.   That was after Pleasant Valley had beaten them twice during the regular season and its way to an undefeated league championship.   While Pleasant Valley won the league title, the loss to Chico in section championship game ended its season.

Windsor and Del Oro have records you expect at this time of year.

Del Oro went 8-2 in league play and finished in second place in the Sierra Foothill League.    Both losses were to league champion Nevada Union who went undefeated and lost in the second round of the Division One Section playoffs.   Del Oro lost to Sacramento in the Semi-Final game.   Sacramento then won the Section Championship and was placed the No. 8 seed in the eight team open division.

STATE DIVISION II POWER RANKINGS COMPARISON:    If order of the four teams which happens to work out with the matchups, Del Oro is No. 25, Windsor No. 30, Ukiah 60 and Chico 101.

Analy hasn’t played in a week and that wasn’t a very good experience in the loss to Miramonte, who won the Division 3 section championship and are in the Open Division.   You can only hope that a team gets them in that position and treats Miramonte the same way they treated Analy.

Patterson is another team in the San Joaquin Section and its record doesn’t equal its seeding.   They went undefeated to win its league and won 14 straight before losing the section Semi-Final game.   They have won 13 games by over 30 points, two over sixty, four more over 50 and four more over 40.

STATE DIVISION 3 POWER RANKING COMPARISON:  Analy is No. 87, Patterson is No. 17

Cardinal Newman hasn’t played since March 1st when they traveled to Arcata and lost a tough 42-40 game.  It turns out that probably cost them a bye, which what Arcata received as the No. 2 seed.  St. Mary’s defeated Salesian to win the section championship and both teams were moved to the Open Division.

The coach for Menlo is John Paye, who was the starting quarterback at Stanford in the mid 80’s and also had some time with the 49ers.   This is his second stint of coaching the Girls at Menlo, which is where he graduated from in 1983.   That year he played for the Division 2 state basketball champion and as head coach he took Menlo to the state championship game in 1988 and 89, winning it in 89.

Like Cardinal Newman, Menlo is a very young team with one senior and six sophomores.   So we could be seeing this game next year at this time.

This is the fourth straight season that Ripon Christian has won at least twenty games.  During that time they dominated its league going 52-4, sharing the league title twice and winning it outright this year.   The playoffs haven’t been as good to them, although they did make the Nor Cal in 2012 and won in the first round.

Ripon had a nineteen game winning streak before losing in the second round of their section playoffs.

After just falling short in an attempt to win its first NCS Championship, St. Vincent is playing in its first ever Nor Cal game.

So far in the playoffs a loss at the right time and you could still keep playing.  That is now over.   Once you lose in these playoffs, the season is over.