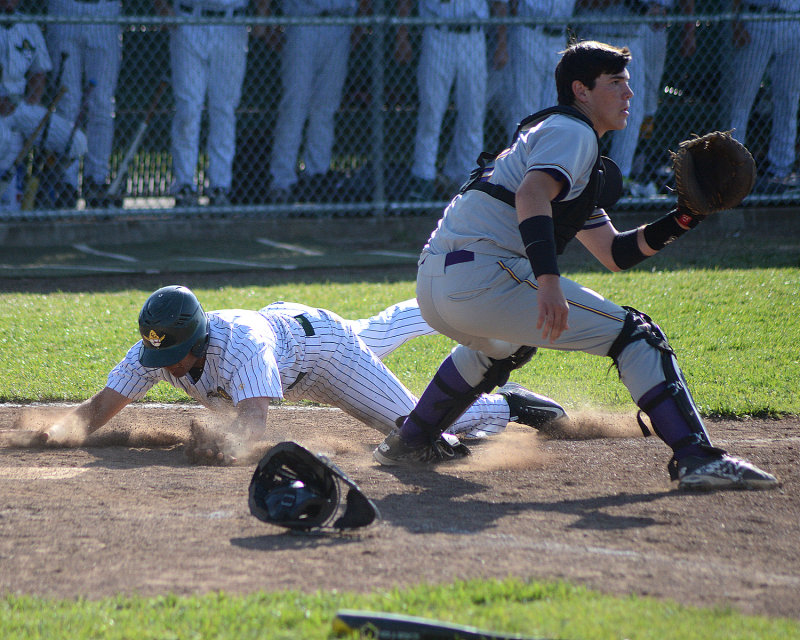 Considering how close the Friday games were, the North Bay League baseball race could have gone in many different directions.  It turned out to go the simplest route, with the top three teams winning to stay within one game of each other at the top of the league standings.


The easiest win for the top teams belonged to No. 1 Casa Grande and it wasn’t that easy.  The Gauchos did give up its first run in almost a month.  Joey Brazil, who is a sophomore, drove in his team high 11th RBI to give Ukiah a 1-0 lead in the second inning.  It ended a streak of 38 2/3 innings that the Casa Grande hadn’t pitching staff had allowed a run.
By the bottom of the inning, Casa Grande had the lead back.  Max Cerini hit a single that scored two runs, which gave Casa Grande the lead for good.  One of the runs scored on the single, the other on an Ukiah error.  The only other scoring was another unearned run in the fifth, which made it a 3-1 Casa Grande final.  Chris Joaquim went five innings to raise his record to 6-2 and Justin Bruihl went the last two innings, striking out four, to pick up the save.
Casa Grande has won ten straight and is 15-5 on the season.  They also keep a one game lead over No. 3 Cardinal Newman and No. 4 Maria Carrillo.  Both those teams have to have a fortunate feeling after pulling out walk off wins on Friday to keep pace with Casa Grande.
In a game that lived up to its storied tradition, there were three lead changes before Cardinal Newman scored two in the seventh and edged Montgomery 5-4.
It was a disappointing finish for Montgomery, who scored two in the sixth to take a 4-3 lead.  Cardinal Newman scored a run to tie the game and had the bases loaded and no outs. The next two hitters struck out, and Montgomery was one strike away from forcing extra innings, but a wild pitch brought in the game winner.
It was a back and forth game too, as No. 4 Maria Carrillo edged Windsor 6-5.  Andrew Vaughn hit a sacrifice fly, which scored Clayton Andrews to end the game.  It was the second run Andrews scored.  He was also the starting pitcher and went five innings and struck out ten.  Vaughn came in to pitch the last two innings, so not only did he drive in the winning run, he was the winning pitcher.
Andrews retired the first ten batters he faced, during that run he struck out seven straight.  Ukiah got their first hit in the fifth inning and ended up scoring three times to wipe out a 2-0 Maria Carrillo lead.  Maria Carrillo came right back to score three in the bottom of the inning.  That lead was short lived when Windsor scored two in the sixth to tie the game at 5-5.
The two teams combined for six errors and seven runs were unearned.
Cardinal Newman is 16-4 overall, while Maria Carrillo goes to 15-5.  Both are 8-2 in league play, one game behind first place Casa Grande.
OTHER FRIDAY NOTES
Two showdowns are set for Tuesday.
No. 5 Petaluma gave up two runs in the top of the first, before cruising to a 13-3 win over Healdsburg.  Austin Gabbert had a double and drove in three to lead a thirteen hit attack.
Petaluma hosts Sonoma Valley who has won eight straight and is 8-0 league play.  Petaluma has a six game winning streak and are 8-1.  In the first meeting on April 10th, Sonoma Valley took a 2-1 win.
The other showdown is in the NCL II race.  No. 8 Sonoma Academy travels to No. 7 St. Vincent, as the two finally meet for the first time this year.  St. Vincent is 7-0 in league play, Sonoma Academy sits at 6-0.
Both teams have dominated NCL II play outscoring teams by a combined 166-28.
Speaking of domination, Clear Lake is 20-0 after an 11-4 win over Kelseyville.  Clear Lake has had some close calls, but has outscored opponents 166-39.
The SRJC baseball team is in the first round of the State Playoffs.  On Friday they defeated Butte 8-0 in Game one in a best of three series.  Game two is at 11 am today, with Game three to follow if necessary.
SRJC finished second in the Big 8 race and is 27-10 on the season.  The Bear Cubs have won seven straight.
My email address is jacpasquini@comcast.net
Share