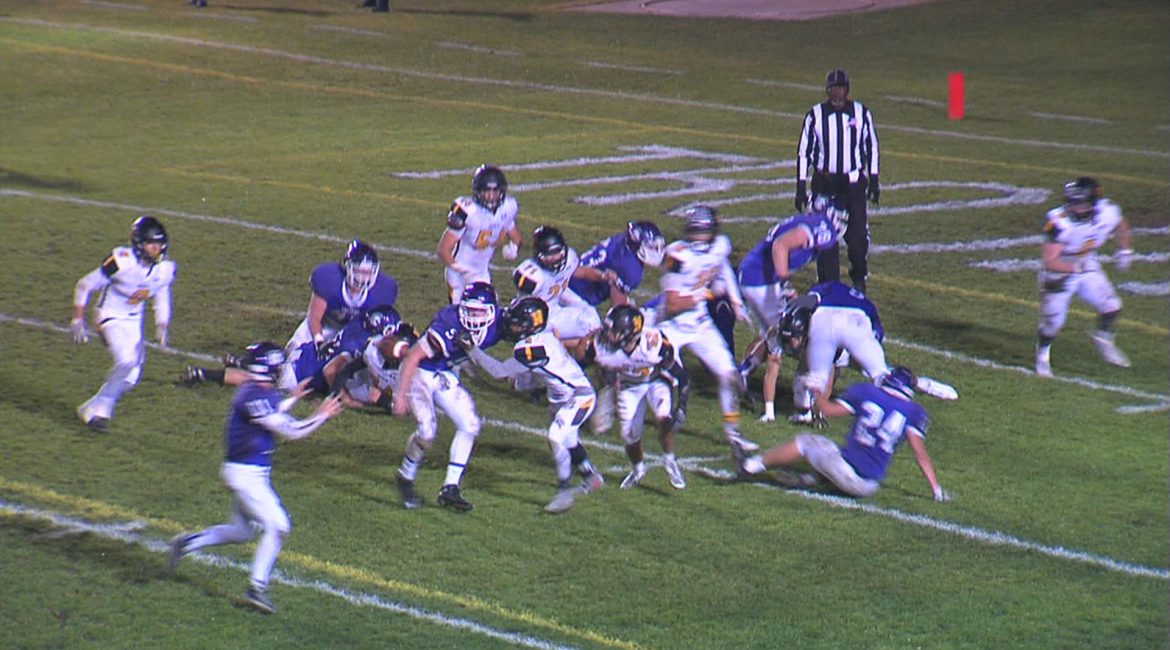 CAL PREPS PROJECTION: Concord by 7
Three of the five NBL teams that left are in this Division and they are all on the road. Based on the Cal Prep Projections, not a good weekend is expected.
Two are meeting teams from the Diablo Valley League. This has turned into a yearly occurrence; the two leagues have met at least once in every playoff since the merger in 2008. The Diablo Valley League unofficially has a 10-7 lead against the NBL, including two of three in championship games. That doesn’t include Windsor defeating Concord 28-20 in the 2011 title game that finished off the perfect 14-0 season, because the Jaguars were still in the SCL.
Of course Windsor is now in the NBL, and gets part two of being the dreaded No. 9 seed. They took care of part one by going on the road and playing their best game of the season in a 44-9 win over No. 8 Pinole Valley. They will have to play at an even higher level for the toughest part of the equation and that is a trip to No. 1 Clayton Valley Charter.
The Ugly Eagles (really that is their name) are big favorites to win their third section championship in four seasons. They are No. 2 in this week’s Chronicle Bay Area rankings; with of course No. 1 being De La Salle.
The biggest thing to know about them is they have one of the best running backs in the state. That is Ray Jackson III, who has rushed for over 1,700 yards and 17 touchdowns. He has had five games in which he has rushed for over 200 yards and in one of those he hit 300.
The other NBL-DVL game is Maria Carrillo at Concord on Saturday. Both teams finished second in their league.
Concord finished one game behind Clayton V alley Charter, the difference was the head to head meeting. That game was on October 23rd and was getting some headlines when Concord had a 14-13 halftime lead. Clayton Valley Charter scored four third quarter touchdowns and took a 42-22 win.
Concord has a running back with bigger numbers than Jackson III. That is senior Harold Tidwell, who has rushed for over 1,800 yards and scored 28 touchdowns. He has also rushed for over 200 yards five times and one of those he hit 300.
This is the third straight season that Miramonte and Casa Grande have met in the playoffs. The teams split the last two years, although Casa Grande would like to flip flop the split. In 2013, Casa Grande went into the championship game looking for its first NCS Championship and to go to 14-0 and lost 41-28. Last season in the first round, the Gauchos took a 48-6 win.
This season Miramonte finished second in the Diablo Foothill League. Their only loss was 37-0 to Campolindo, which decided the league race. Campolindo is the No.1 seed in Division 3 and the defending champions.
Miramonte is more of a balanced offense. Junior quarterback Tim Tague has passed for over 3,000 yards and 29 touchdowns. He has also thrown 11 interceptions, seven of those in a two week period towards the end of the season. In the loss to Campolindo he completed 11 of 27 for 73 yards and threw four interceptions.
Running back Clayton Sterh rushed for over 1,100 yards and twenty two touchdowns. He started the season off with a bang against St. Mary’s going for 272 yards and six touchdowns in a 58-41 win.
Last week he rushed for 180 yards and three touchdowns in a Round One 41-0 win over Redwood.
DIVISION 3
FRIDAY
No. 7 El Cerrito (6-5) at No. 2 Analy (11-0)
CAL PREPS PROJECTION: Analy by 7
SATURDAY
No. 6 Petaluma (8-3) at No. 3 Rancho Cotate (8-3)
CAL PREPS PROJECTION: Rancho Cotate by 29
Petaluma has been here before, literally.


The local fans are anticipating a Rancho Cotate-Analy match up next week, basically overlooking Petaluma. Fans were also doing that two weeks ago in preparation for the SCL championship game, which was played on the same field and we all know how close Petaluma came.
This used to be a game that was played every season. It hasn’t been played since 2012 when it was stopped, sort of like a referee stopping a fight because it was two one sided. It is a small sample size as Rancho Cotate won in three straight seasons by a combined score of 122-0.
Petaluma wasn’t beating to many teams in those seasons though. In 2011 they were. That was Rick Ellison’s last team that went undefeated until the NCS Division 2 semi-final game. On the way, they beat Rancho Cotate twice. The first time was a 12-7 win in their normal pre-league game in the early part of the season.
The second game was probably the most famous game between the two. In was in the first round of the playoffs in which Petaluma as a No. 1 defeated No. 16 Rancho Cotate 14-12. The clock ran out with Rancho Cotate being called down inches away from the goal line on the last play. The debate has raged on ever since whether he was in or not.
This is the third time in four seasons El Cerrito and Analy have met in the playoffs. They have split the first two games. In the 2012 semi-finals El Cerrito took a 40-20 win. Analy went into that game 12-0. Last season, Analy won in the first round Analy 68-7. In between in 2013 El Cerrito won the section championship. Since then El Cerrito has had back to back 5-5 regular seasons.
DIVISION 4
FRIDAY
No. 7 Justin Siena (9-2) at No. 2 Cardinal Newman (9-2)
CAL PREPS PROJECTION: Cardinal Newman by 12
KSRO 1350 AM/103.5 FM GAME…BROADCAST 6:35

Cardinal Newman is used to meeting Justin Siena in the playoffs, just not in football. Just last Saturday Night,  Cardinal Newman defeated Justin Siena in the volleyball playoffs. The two schools have met several times in the basketball playoffs. In football, Cardinal Newman has moved to Division 4, so meeting Justin Siena is a given.
Justin Siena has won two of the last three section championships. This season they finished second in the Marin County League with their lone loss 26-8 to Marin Catholic. The same thing happened last season, although Marin Catholic also lost to Novato, so the league ended in a three way tie.
Justin Siena losses this season are to teams with a combined record of 18-3.
Marin Catholic has won two NCS championships since 2009. That was while they were in Division 3 and maybe that is why they moved to Division 4. They have had some pretty good teams the past few seasons. Since 2009 the lowest seed they have been is a No. 3, which was last season. Three times they were undefeated and a No. 1 seed and lost either in the semi-final or the championship game.
DIVISION 5
SATURDAY
No. 7 Middletown (6-4) at No. 2 St. Bernard Academy (9-1)…1 pm
CAL PREPS PROJECTION: St. Bernard Academy by 7
Middletown continues its amazing season. This is the third straight season they have made it to the second round of the playoffs. Middletown losses were to teams with a combined record of 33-9 and two of them were in the first two games of the season. That includes Salesian, who is 4-6 and the No. 5 seed in this bracket. Salesian has won four of five section titles, once as a No. 5 seed.
St. Bernard Academy won the Humboldt Del Norte Little 4 and their head coach is Matt Tomlin who used to be head man at Piner and an assistant for the Windsor undefeated section championship in 2011.
They went through the Humboldt Del Norte Little 4 undefeated for the second straight season. Their lone loss was the second game of the season to Justin Siena 35-14.
Junior quarterback Jack Rice has passed for over 2,600 yards and rushed for nearly 800 more. He has 30 touchdowns throwing and eleven running.
Last season as a No. 2 seed, they lost to St. Helena in the semi-final round 37-14.

JUNIOR COLLEGE FOOTBALL
NORTH STATE BOWL
SATURDAY
No. 23 Modesto (5-5) at No. 14 SRJC (6-4)…5 pm
The last time we saw SRJC they were losing a heartbreaker to Diablo Valley College. The 32-29 overtime loss appeared to cost them a home bowl game. Turns out it didn’t and they get the normal Saturday at 5 pm game time.
Modesto comes into the game with a three game losing streak. The other two losses were to San Francisco and San Mateo by scores of 51-41 and 41-27.
My email address is jacpasquini@comcast.net
Follow me at twitter at @homer2612
Share