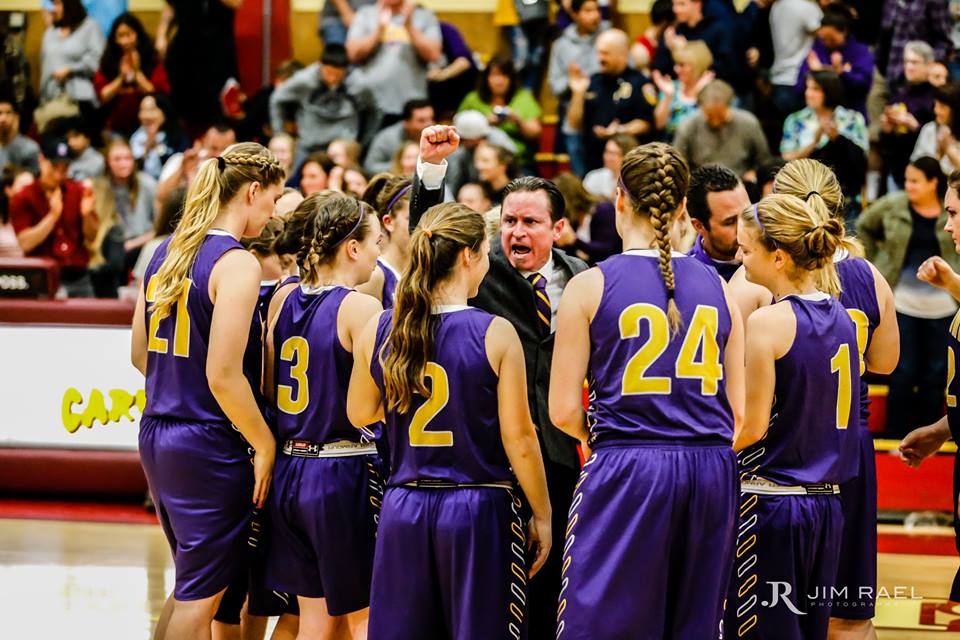 The North Coast Section Playoffs are moving to the semi-final rounds. Locally there are six teams left and there is a guarantee that there will be at least one team for the NCS final round. That is because in the Division 6 Boys Bracket, Archbishop Hanna is meeting Anderson Valley.
Of the six teams it is split right down the middle, three Boys and three Girls. Division 6 is the only bracket that has more than one local team.

DIVISION 2 BOYS AND GIRLS
Locally this is all about Montgomery as both the Boys and Girls teams are still going.


This hasn’t been a familiar year for the Montgomery Boys Basketball Team. It had a different look at the beginning of the season. For the first time since 1984 the Head Coach wasn’t Tom Fitchie. He stepped down and the program has been taken over by Zac Tiedeman, who as a player helped Fitchie win two of his four NCS Championships in 2003 and 2006.
That wasn’t the only reason this season didn’t look familiar. They lost its league opener to Cardinal Newman and were never really in the NBL regular season race. They went into the last league game needing a win just to get into the NBL post season tournament. They did get that win, but then lost in the first round to Cardinal Newman, a team they went 0-3 against this season.
Yes, this season didn’t look like a typical Montgomery season, that is until now.
The first break they got was getting a home game in the first round of the NCS playoffs and that was barely as a No. 8 seed. You know what they have done since. Two NCS wins including a major upset over No. 1 Windsor, a team they went 0-2 against during the regular season. So now Montgomery has qualified for the Nor Cal playoffs for the sixth time in seven years.
The Viking Boys are meeting a program who is used to being here. Newark Memorial has won three of the last four NCS Division 2 championships. In 2013, they met Montgomery in this round and took an easy win. Last year El Cerrito ended their three year run by defeating them in the second round.
Two of the three years, Newark Memorial was the No. 1 seed. In 2014 they were No. 2. That season Montgomery was No. 1 and lost in the Semi-Final to No. 4 Concord, who then lost to Newark Memorial in the Championship game.
There was a time this year that the thought was Newark Memorial would be the No. 1 seed. That was before they lost their last two regular games to quality teams. They ended up at No. 5 which means they had to go on the road in the second round, where they defeated Concord, a team they lost to in December. The win raised their record to 20-8. It is the eleventh time in twelve years during the MaxPreps Era that they have won twenty games. Before they started winning Division 2 championships, they were in Division 1.
The Montgomery Girls are meeting a familiar foe and usually if you are going to win the NCS Division 2 championship you have to go through them. Most of the time teams don’t.
Cardondelet in the No. 1 seed, which is a position they are used to being in. This is the tenth time in thirteen seasons they have been No. 1. One of the seasons they didn’t get No. 1, they were No. 2 in Division 1. They have won ten of thirteen NCS Division 2 championships. Last year was the only season as a No. 1 seed they didn’t win the championship, losing to No. 2 Dublin 57-55 in the championship game.
Montgomery has met Cardondelet in this round before and it didn’t go well. That was in 2010 and Montgomery lost 73-31. That is a typical score for Cardondelet in this round. The last four seasons in the semi-final, the closest game they had was in 2012 which was a 66-26 win. Actually that is a typical score for Cardondelet in Division 2 period. That is until the championship game last season. The championship games the three years before that they won by 52, 28 and 15. The fifteen point win was in 2012 over Casa Grande by a 60-45 score.
If the Montgomery Girls win this game, it would shake up the state basketball world.

DIVISION 4 GIRLS
There hasn’t been all that much suspense in this Division. The four teams that are in the semi-finals have won seven games and only one of them has been decided by less than 15 points.

DIVISION 5 GIRLS
The Cloverdale Girls Basketball team is usually pretty good. This is the eighth time in nine years they have won twenty games. That hasn’t equaled playoff wins. Since 2010, they have been in Division 4 and were in over their heads. The five years before that Division 5 was dominated by Branson.
The Cloverdale Girls have qualified for the Nor Cal for the first time  since 1999.  The last time they won a North Coast Section championship was 1984..They had pretty good teams back then, but were overshadowed by the school’s Boys team as they were winning two straight state titles. They were the under-card to that going to back to back Nor Cal Championship games at the same time. From 1978-1984 they won five of seven North Coast Section Titles.
Cloverdale is hosting Urban, which is a school from San Francisco. They were in a very balanced league in which they were Co-Champions with University, which is another school from San Francisco. They are the No. 4 seed and are meeting St. Joseph Notre Dame in the other semi-final.
One of the losses for Urban was to St. Joseph-Notre Dame back in December in a game that wasn’t close. Also in December, they had a win over Middletown 46-37. Cloverdale was 1-2 against Middletown this season. Both team have also faced Branson and had one sided wins.
Urban did win an NCS championship in 2004. That season they went 29-1, the loss in the Nor Cal Playoffs. They have been up and down since with six twenty win seasons and three under .500.
DIVISION 6
The Anderson Valley-Archbishop Hanna game is a rematch of a game played on December 11th won by Anderson Valley 67-48. The two teams met in the semi-finals last season with Archbishop Hanna taking a 83-76 win. Archbishop Hanna then lost the championship game to St. Bernard’s Catholic 70-66.
Both teams are looking for their first ever NCS championship.
SCHEDULE
All the games are Wednesday night at 7 pm.
DIVISION 2 BOYS
No. 8 Montgomery (17-11) at No. 5 Newark Memorial (20-8)
DIVISION 2 GIRLS
No. 4 Montgomery (20-9) at No. 1 Carondelet (21-6)
DIVISION 4 GIRLS
No. 3 St. Mary’s (17-12) at No. 2 Cardinal Newman (26-4)
DIVISION 5 GIRLS
No. 3 Urban (22-7) at No. 2 Cloverdale (24-6)
DIVISION 6 BOYS
No. 3 Archbishop Hanna (25-4) at No. 2 Anderson Valley (21-5)
My email address is jacpasquini@comcast.net
Share