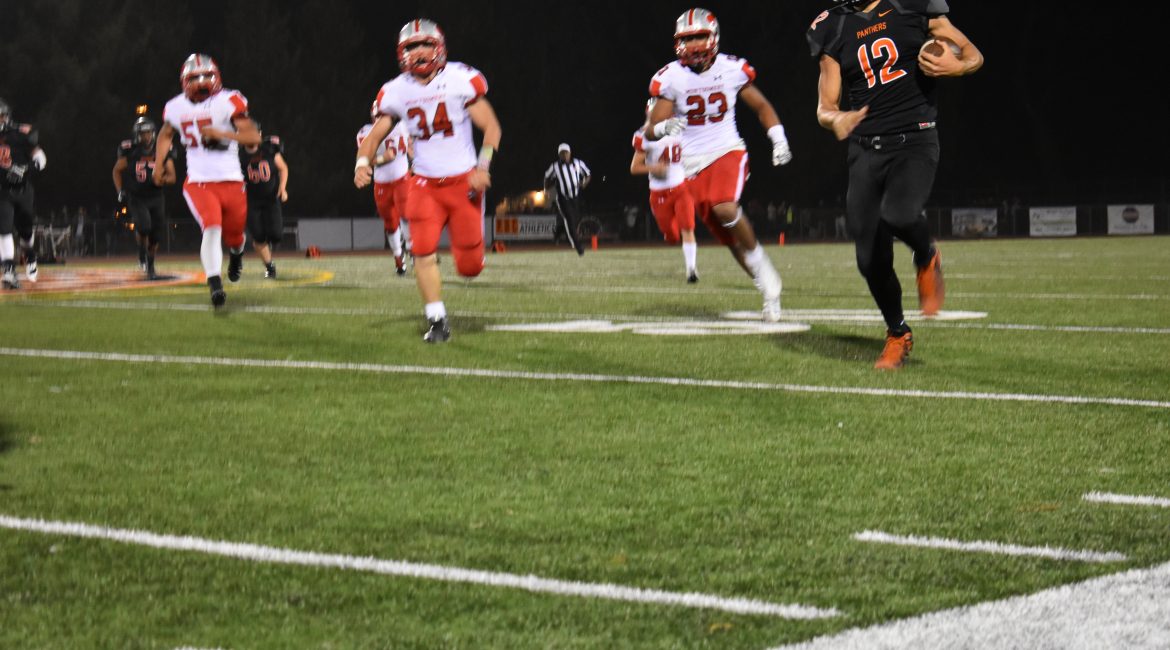 by Dale Watkins
Longtime North Bay League foes would finally clash Friday night at historic Ernie Nevers Field, in a classic matchup that lived up to all the hype. The sellout crowd saw Santa Rosa pull away late from visiting Montgomery for a resounding 41-14 victory.


Both teams would exchange scores throughout the first half of action. Monty’s Trae Anaya would elude a couple Panther defenders from 15 yards out for the game’s first score. Panthers quarterback Isaiah Steele would respond by throwing a bomb downfield to Cassius Banks for a 73-yard TD completion on 3rd down and 27, tying the game at 7 apiece.
Following a Carlos Lemus run to give Santa Rosa the lead, the Vikings’ Max Gaddie intercepted Isiah Steele’s pass and took it 22 yards the other way and to the house for a pick-six, outrunning several would-be tacklers. Wide receiver Kalei Aukai would end the first half corralling a pass over a defender’s reach in the corner of the endzone, giving his Panthers a 21-14 advantage heading into the locker room.
Montgomery had no answer for Santa Rosa’s 4th quarter explosion, however, as they erupted for 20 straight points in the span of the final ten minutes. Aukai added to his impressive performance with a 29-yard catch and score along the sideline. On the next drive, Steele faked the handoff and lobbed a 4-yard pass over the offensive line to a wide-open TreVon Manning. Banks put the nail in the coffin with 1:20 left as he fended off two defenders to snag an errant fly-ball from a pressured Steele.
The Vikings just couldn’t find any offensive rhythm in the second half, failing to convert on 4th down repeatedly and turning the ball over four times. Two of those turnovers were forced fumbles lost; one recovered by Jayvee Long and

another by Blake Thomas.
Isaiah Steele was sensational from start to finish, dazzling for 233 yards and five touchdown passes while completing 50% of his throws. The star wide receiver tandem of Banks and Aukai finished with two touchdowns each. Vikings runningback Mackenzie Volkmuth carried his team’s load offensively, rushing for 98 yards on 17 carries.
The Panthers surge to 5-1 overall behind this statement win, as they now prepare to battle Windsor. Montgomery drops to 3-3, but the Vikings look to bounce back when they host Jordan Brookshire and perennial powerhouse Cardinal Newman next Friday.
Share
Copyright (c) 2016 Splash.
Theme by StylemixThemes.