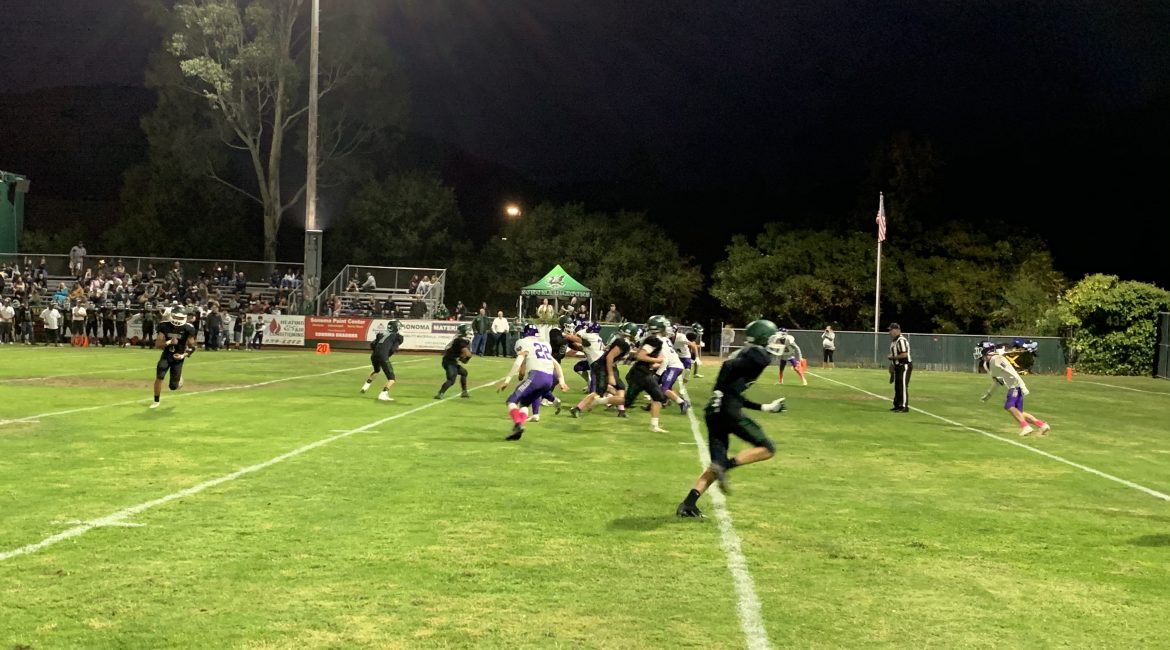 SONOMA, CA – Petaluma snapped a five game losing streak Friday night when they defeated Sonoma Valley for their first VVAL win. The game, however, was cut short due to a fight that broke out late in the game.

With 11:04 remaining, Jake Baker completed a three yard pass to Emmanual Plancarte for touchdown, which made the score 35-14. That would be the final score.

On the ensuing kickoff, Petaluma’s Gianni Johnson took a knee, as well as a big hit from a Sonoma Valley player. Then there was chaos. Punches were being thrown after the play, and multiple fights were going on at once. It was an ugly scene. Multiple players from the Sonoma Valley sideline stormed onto the field, engaging in the brawl. Petaluma’s players were held back by coaches. In the end, all but eight players from Sonoma Valley were ejected from the game. They did not have enough players to finish the game. Petaluma did not have a player thrown out.

Both teams eventually went to their sideline, and both coaches, athletic directors, administrators, and police officers met at mid field to determine that the game would end at that point.

“Our guys were trying to pick up their teammate from the pile, and they were attacked by the players and weren’t allowed to help them up. We will look at the film and further evaluate the situation.” said Petaluma coach Rick Krist.

“This was a very unfortunate incident that occurred. Game tape will be reviewed in collaboration with officials report.”

Sonoma Valley (1-8, 0-5) started off the game in style, giving the ball to Plancarte as he led them down the field on a long drive to start the game. He punched it in from three yards out to give the Dragons an early lead.

Petaluma struggled offensively early on. They went for it on fourth down and didn’t convert, and also went three and out on their next drive.

The Trojans finally put a good drive together to begin the second quarter, as Mario Zarco scored from four yards out to tie the game at seven at Arnold field.

Petaluma got the ball back after Francisco Perez recovered a fumble, and used it to take the lead. QB Jack Hartman, fresh into the game after sitting out most of the beginning of the game due to a knee injury, threw a 34 yard touchdown pass to Johnson with just under eight minutes remaining in the first half.

Petaluma (2-6, 1-3) got the ball back again, and was set up beautifully by Zarco’s 30 yard run to put them in the red zone. He then took the ball again and found the end zone for his second touchdown of the game, as Petaluma went into the locker room scoring 21 unanswered points.

Petaluma received the second half kickoff, and used it to continue their offensive roll as Hartman kept on an option for score his fifth touchdown on the ground this season, a two yard run.

After stopping Sonoma Valley on fourth down, Petaluma was set up with great field position, and took advantage of it as Hartman threw his second touchdown pass to Ryan Sullivan, a 12 yard connection to break the game wide open at 35-7.

Miguel Rangel and Jullian Marth were both 100% on extra points.

The game film will be reviewed by the officials association to determine if more ejections are necessary, as well as suspensions for the next scheduled contest.

Petaluma is scheduled to play Napa at Memorial Stadium next Friday night.

Sonoma Valley is scheduled to host Vintage next Friday.