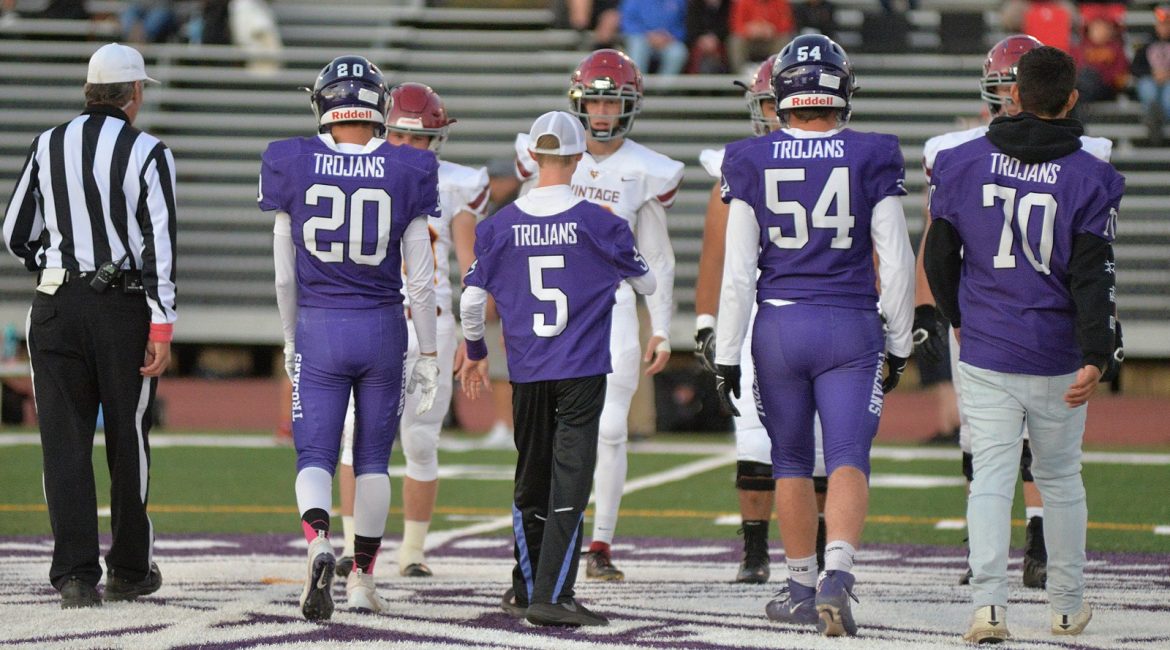 PETALUMA, CA – Petaluma Trojan head coach Rick Krist made a very special announcement to his players on Monday. The team had a light workout on their bye week, but Krist did something very unlike him, he looked ahead. He looked ahead about 3 and a half weeks. He brought his players up into a meeting with their water boy Aidan Spillane, who suffers from polymicrogyria a form of Cerebral Palsy, to tell him that he will be able to suit up and play in the Trojans final game of the season, the Egg Bowl against Casa Grande on November 2nd.

“I’ve thought about this ever since he was a freshman. I made sure to talk to John Antonio (Casa Grande Head Coach) about it first and he was on board.” Said Petaluma head coach Rick Krist

“This is awesome. We can’t wait to see Aidan at the Egg Bowl.” said Casa Grande Head Coach John Antonio in a Tweet on Monday

Aidan, through the interpretation of his father Brett, says “I’m excited. Nervous at first but then once it settled in, I was very excited.”

When being told his family and friends are coming into town for the game, he became both nervous, but also still very jubilant.

The players and coaches erupted with applause and were very excited for Spillane.

Like I said above, Aidan has PMG, a condition characterized by brain malformations that disrupt the brain’s ability to communicate with his body. With more damage in the left side of his brain his right side muscle coordination is most severely affected and he has minimal use of his right arm and hand. While understanding speech is easy enough, Aidan is unable to speak. Additionally, epilepsy will be a lifelong affliction.

As a result of his disease, Spillane has trouble with motor skills, including the use of only one hand and, although he understands speech, he has trouble verbalizing.

Brett has said that throughout the years, he’s become more independent. He’s been sitting in the student section at volleyball games this year. He’s also taking much more initiative with his waterboy duties.

Aidan and his father Brett, have been Trojan super fans for a very long time. When Aidan was 6 years old, his father began to take him to Petaluma High Football games as a way to give Aidan’s mother, Jobbie, some time to herself. What that did was create a special father-son bond.

If you want some more proof, as if you ever needed it with the two super fans, Coach Krist told me a story that in 2014 when the team traveled to Alhambra High School for a NCS Division 3 playoff game, a 7:00pm kickoff, Aidan and his dad were already in the bleachers when the team arrived at about 5:15-5:30.

“They’ve been super fans for a long time. They’re at every game.” Krist said

“He’s (Aidan) passionate. He’s apart of the football team. Brett is a super dad. The kids love Aidan and Brett. When we lost to Acalanes in the NCS Playoffs in 2017, he was crying. The kids are excited that he’ll be with us that day.” Krist commented further.

Before Aidan got to high school, Coach Krist gave him some Trojan gear, including a jersey. When he got to high school his father asked if there was anything he could do to help the team. After that, Aidan was the new Trojan water boy, and he gets my vote for being the best water boy in the league.

Aidan and Brett attend all of the practices and serves as the waterboy for the JV team as well.

Aidan told me his favorite memory is when the Trojans defeated Casa Grande in the 2017 Egg Bowl.

Now Aidan is official as he’s listed on the Petaluma Football roster, number 5. He picked a good one too. Some Trojan greats have worn that number including QB’s Mike Russel from the 2009 undefeated team, and Brendan White, who led the 2015 team to a near upset of Analy and Rancho Cotate in the NCS Division 3 playoffs. Garrett Freitas also wore that number, who was the leading ball carrier for Petaluma in their 8-2 season in 2017, as well as rushing for over 1,000 yards in his senior season last year.

“I’m really excited for Aidan to have this opportunity because no one is a bigger Petaluma football fan than he is. He’s been to every single game for the last 12 years and he means a lot to this team.” Said Senior, Dante Ratto

“I was so happy to hear that Aidan would be getting to play in the Egg Bowl. He deserves every second of this as he is apart of our Trojan Brotherhood.” said Former Petaluma football player, Dominic Ayers.

As also being a former Trojan, I’d like to say something as well:

I was so elated to hear that this was going to happen. Having Aidan and his father on the sideline with us during games, and every day at practice made all of us smile. I know all of us former playes who have met them, we all are proud of Aidan and very appreciative of his support over the years. They both love Petaluma High School Athletics more than anyone I know, and I am so glad that Aidan and his family will be able to have this moment at the biggest game of the year.

Aidan will be on the field when the Trojans head across town to face the Casa Grande Gauchos in the Egg Bowl in the regular season finale on Saturday November 2nd at 3pm. I hope everyone who reads this is able to attend. It will be a moment many of us in Petaluma will never forget. 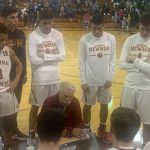 Michael sits down to talk to 816 game winner Tom Bonfigli who has been a boys high school basketball coach for 36 years, spending 26 at Cardinal Newman and 10 at Justin Siena. Tom has taken over as the head boys basketball coach at St Vincent de Paul High School in Petaluma.
View on Facebook
·Share

Michael sits down to talk to 816 game winner Tom Bonfigli who has been a boys high school basketball coach for 36 years, spending 26 at Cardinal Newman and 10 at Justin Siena. Tom has taken over as the head boys basketball coach at St Vincent de Paul High School in Petaluma.
View on Facebook
·Share

YSN365.com - The Youth Sports Network is with Greg Anderson.