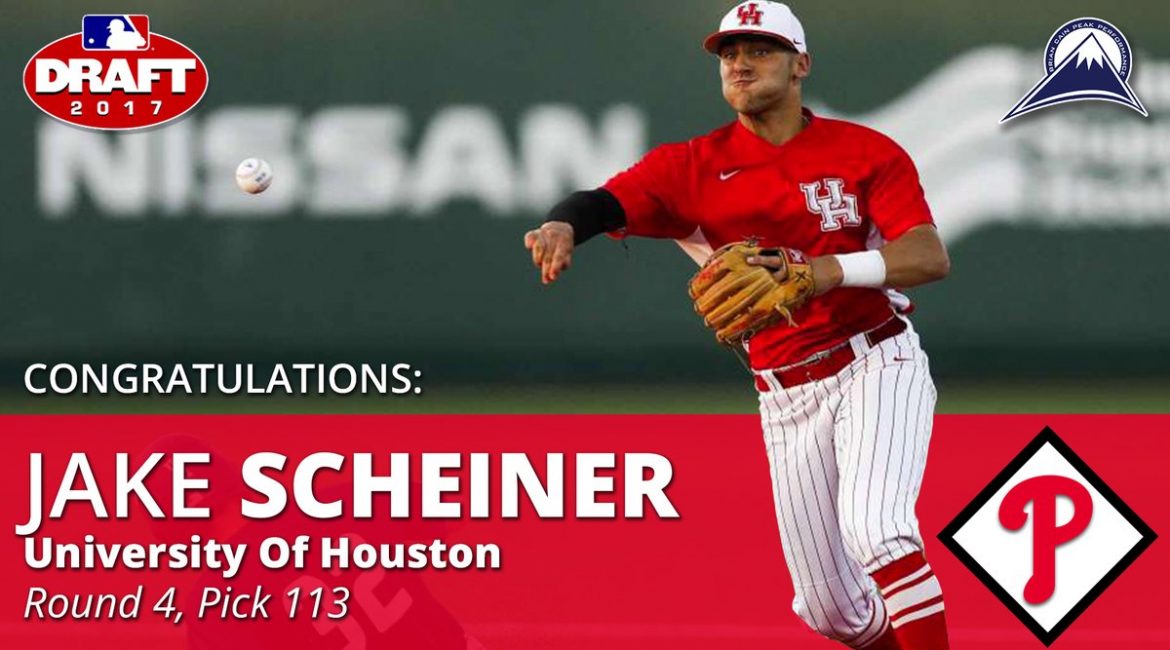 In his one year with the Cougars after spending two seasons in junior college, Scheiner was named to the D1Baseball All-America third team following a season in which he batted .346 with 18 home runs and 64 runs batted in.
Scheiner discussed what it was like to receive that call from the Phillies, as well as the journey he took from JUCO to Division I baseball and now to the pros:
Jason Kates (OPSN Phillies Beat Writer): What was that moment like when you had found out that the Phillies would be drafting you with their fourth round pick?
Jake Scheiner: It was an unbelievable experience. Ever since I was a little kid playing baseball at five years old, I realized that I wanted to be a professional, and especially getting a call from the Philadelphia Phillies. They have an unbelievable franchise and are a great historical club and I’m honored to play for an organization such as the Phillies.
Leading up to the draft were you in any sort of contact with the Phillies, or were you surprised when you found out that they would be the team selecting you?
I was talking to a lot of teams, I didn’t really have a hint of who I would get drafted by. I remember talking to the Phillies and their local area scout and I was excited. I didn’t really have a clue who was gonna take me.
What have these past few years been like for you, starting out at Santa Rosa JC for two years, transferring to Houston and now becoming a part of a professional organization?
I’ve always been the type of player that’s an underdog, and I’ve never been recognized for my full potential and I grinned it out through junior college. It’s been a long journey, it was a lot of hard work and dedication. I knew where I wanted to be, and my work ethic has taken me to where I’m at right now.
As the draft approached, your name wasn’t given much recognition throughout prospects list. Did that fuel you throughout this season at Houston to try and get your name out there?
Coming out of high school the same thing happened, I didn’t have any offers so I went to my local junior college. I knew that my work ethic was the only thing that would allow me to reach the D1 level. I came into a completely different state, whole new scouts and everything so I knew I had to do what I do and just keep hitting the ball. I knew I was getting recognized, and I’m fortunate to have the Phillies recognize me. I’m excited because wherever I go I know I will be the hardest worker.
Switching gears to your actual game, what do you feel are some of your biggest strengths, as well as some things you would like to improve on as you get your professional career started?
Obviously hitting. I can hit for power, I can hit for average, I just love hitting. My strengths with that are I never get too high, I never get too low. I’m very consistent and you’ll see a lot of quality at-bats. Something I want to work on is I just started playing third base towards the end of the year, I see myself as a third baseman and I feel like I can help our club win games at third base so I just have to continue to work there. I also want to drive the ball opposite field more, but overall I feel very confident in the work I put in.
If you could compare yourself to an MLB player, who would you pick and why?
There’s a couple players in mind. I’ve been thinking more of an Ian Desmond/Manny Machado, I’m not the biggest guy out there but I can hit for power, I also see myself as a great defensive player. Ian Desmond is very versatile, I’ve played every position and I just see myself just trying to find the lineup somehow, I don’t care where it is I just want to play.
In your one season at Houston, you were named a semifinalist for the Dick Howser award, you were named to the All-America Third Team. What was it like to receive that recognition at the highest level of collegiate baseball after spending your first two years at JUCO?
It was expected, I expected it out of myself. I had a great sophomore season at junior college, and it’s still the same game, I didn’t think of it as any higher. It was an awesome feeling to get recognized for something that I was told in the past that I wouldn’t be able to accomplish. I’m glad I got some recognition, but I just wanted to win baseball games.
Now that you have achieved such an incredible accomplishment, what can you say you’ve learned about yourself over the past few years?
That my work ethic has not changed, no matter what I’m doing. I always wanna be the best at what I do, and no matter how long that takes I’ll put in the effort and keep a positive attitude in order to accomplish what I want.