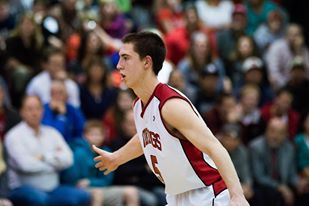 Parents make decisions almost every day about something involving their children.  Some decisions are easier than others and every decision has a different ranking on the importance scale.

Once the kids become teenagers it doesn’t seem like any decision is easy.

Shaw and Kim Kobre have a decision to make involving two sons who have plans this weekend.  These plans have led to what are some of the biggest moments in their sports careers.  It might not rank as high as some decisions they have made or will make involving them-but it is a head scratcher.

Good luck with this decision Mom and Dad.   I can’t hear it now, “You always like him better than me”.

That we are still talking basketball for so many teams is historic.   The area has had teams go this far before, for example last year Cardinal Newman going all the way to the state championship.  But this many is a first.

Usually when the clocks change we are talking spring sports and I am keeping an eye on that.  For example, the Casa Grande baseball team and only one game was a one run game.

One of the reasons for so many going is the change in the playoffs.   With the addition of the Open Division, more teams qualify for the Nor Cal portion of the tournament.

Maybe this is the new normal.

ALL GAMES SATURDAY AT 6 PM

Deer Valley already has one thing that Santa Rosa was going for.   Deer Valley won the North Coast Section Division 1 championship as a No. 4 seed defeating Berkeley 57-47 in the championship game.   Berkeley had defeated Santa Rosa 56-45 in the semi-final.

Santa Rosa was the No. 3 seed in the NCS playoffs.   The main reason they were above Deer Valley is because they beat them 68-65 on December 27th in the West Coast Jamboree.     It was a game that Deer Valley led most of the way.   Katie Daly pulled some magic in the last thirty seconds, hitting a layup to tie the game and then made a steal and drove for an old fashion three point play that gave Santa Rosa the winning points and its first lead since the second quarter.

Deer Valley went undefeated in winning the Bay League and has a ten game winning streak.   The win over Berkeley in the NCS Championship game reversed a regular season game that was won by Berkeley 51-46.   Having done it with Berkeley,  they try to do the same thing against Santa Rosa.

Three of its losses this season were to Archbishop Mitty, who is the No. 3 seed in the Open Division.  They finished one game behind Mitty it there league race and then lost to them in the CCS championship game.

The league they are in is called the West Catholic League and it is a brutal one.   Power rankings wise it is ranked No. 3 in the State and four of the eight team league is still playing.

Serra has an 18 team roster posted on MaxPreps.

This is another young team with two seniors, four sophomores and two freshmen.  The two leading scorers are the two seniors.

Arcata, the team that defeated Cardinal Newman 42-40 in the NCS Second round, is the No. 2 seed in this bracket.

East College Prep is in West Palo Alto and they have seven players on the roster, two seniors, three juniors and 2 sophomores.  They finished second in league behind undefeated Pinewood who is the No. 2 seed.  The two losses to Pinewood were by a combined 12 points.  They won the first game of the Nor Cal tournament over Central Catholic by a 73-13 score, leading at the half 44-8.

Eastside College Prep opened the season with a three point loss to Bishop O’ Dowd and lost three other games by four points or less against teams that are also playing on Saturday.

Craig McMillian is ending his 14th season as head coach at SRJC and has 298 career wins.  If he gets the magic number 300 this weekend the Bear Cubs will win its first ever State Championship.

SRJC goes into the final four winning 18 of its last 19.

Chaffey was the No. 4 seed in the South Bracket.  Like in the North, the No. 1 seed was defeated in the second round.     Chaffey has won nine of ten.

The other game is between Chabot College and San Bernardino and will start after the SRJC game.   The championship game is Sunday at 3:30.