Preview: League Races To Be Decided…Then It's on to the NCS Playoffs

YSN 365 > News > News > Preview: League Races To Be Decided…Then It's on to the NCS Playoffs 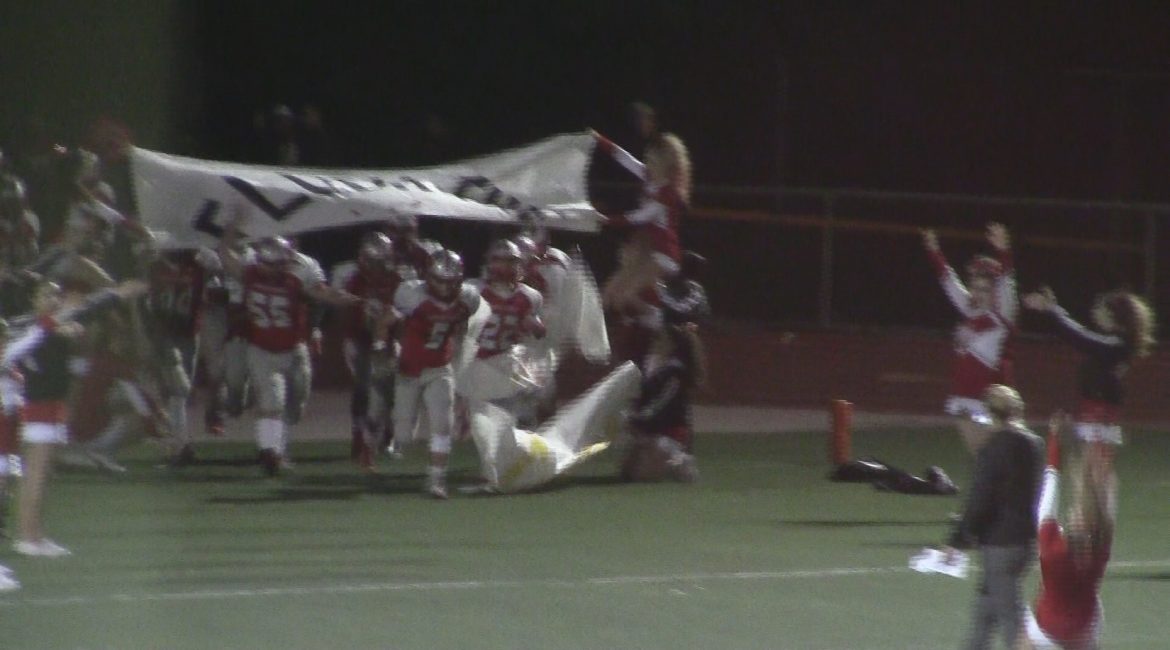 This is the fastest week of the high school football season.
Not only is it the last week of the regular season, where  after a two month battle, the league races will be decided, but then overnight the focus switches to the NCS playoffs, which are announced on Sunday.
In this preview we will try to examine how things look on both ends of the weekend.
All four leagues we cover could have a tie.   In the case of a tie, each team gets a championship banner, but only one gets a guaranteed spot in the playoffs.   That guarantee might not sound like much, but it could mean an extra home playoff game or two if they are meeting a team that didn’t get a guaranteed spot.  That is where the tie-breakers come in.
Just a warning, the playoff preview part of this is like the “Cal Prep picks,” it is a projection.  The projections or statements are based on the power rankings and a guess.  But the truth is you never know what the committee will do until they get into its secret room and hammer away.
NBL
Santa Rosa (1-8, 1-5) at No. 2 Rancho Cotate (6-3, 5-1)
CAL PREPS PROJECTION: Rancho Cotate by 45

No. 10 Casa Grande (3-6, 3-3) at Montgomery (4-5, 3-3)
CAL PREPS PROJECTION: Montgomery by 7
The league race could end up in a three way tie between Rancho Cotate, Cardinal Newman and Windsor.  Any tie and Cardinal Newman gets the guaranteed berth.
The North Bay League hasn’t had to use a tie-breaker in the Cal Preps era (since 2001).   Maybe they should look into their rules.   It is the only league where head to head means nothing.  The tiebreaker is decided by numbers drawn at the beginning of the season and of the three teams, Cardinal Newman drew the best number.
The only way Cardinal Newman doesn’t get the guaranteed spot is if they lose to Windsor and Rancho Cotate defeats Santa Rosa.   Rancho Cotate would win the league title outright in that case, so Rancho fans will be Windsor fans Friday Night.
With both Rancho Cotate and Cardinal Newman in Division 3, if they were to meet before the championship game, this would decide home field advantage.
Windsor can be part of a three way tie if they beat Cardinal Newman and Rancho Cotate is upset by Santa Rosa.  In that case Cardinal Newman still has the best number.  If that were to happen Cardinal Newman would win the tie breaker in a three way tie, even though they lost to the two teams they are tied with.
Windsor has lost two straight and if they lose another they would drop into a third place tie with the Casa Grande-Montgomery winner and Maria Carrillo if they beat Ukiah.
Cardinal Newman is ranked higher than Rancho Cotate in the Division 3 power rankings.   The committee likes head to head when it comes to seeding purposes, so it’s a tossup which team will be seeded higher.    In this case the automatic berth determination is more important than the seeding.

The rest of the playoff teams are in Division 2.  They are Windsor, Montgomery, Maria Carrillo and Casa Grande.  That is the order of how the teams are listed in the power rankings.
Windsor and Maria Carrillo are No. 3 and 4, while Montgomery is No. 6.   It will be interesting to see where they will end up in the order of things.   Head to head really doesn’t apply here, because Windsor beat Montgomery, who beat Maria Carrillo, who beat Windsor, so things offset.
A win for Casa Grande over Montgomery could get the Gauchos a home game.
Santa Rosa and Ukiah are not eligible for the NCS Playoffs.
SCL
No. 2 Analy (8-1, 5-0) at No.7 Petaluma (7-2, 4-1)
CAL PREPS PROJECTION:  Analy by 21

Healdsburg (1-9, 1-5) BYE
One of the best kept secrets is that the Analy-Petaluma game is actually for the SCL title.   If Petaluma wins they are co-champions with Analy.   The first tie-breaker in the SCL, and the other two leagues we follow, is head to head.   That means a Petaluma win and they get the automatic bid for the NCS playoffs.
Analy has already clinched a SCL championship pennant, which they will receive for the third straight season.   They will try to save the league some money with a win and a sole championship.
Both Analy and Petaluma are in Division 3.  The only way Petaluma will get a home game is if they upset Analy and go in as the automatic berth.
Analy is No. 5 in the power rankings, which should get them a home game.   Should is the key word.   The schedule doesn’t rate very high and their only loss is by an ugly score.  The score of a loss doesn’t make a difference in the power rankings.  A loss is a loss, whether it’s by 7 or 27.   That’s when the human factor comes in.  To make sure they get a home game, they better get that automatic berth.
Analy and Petaluma met in the first round last season.  Analy won that game 42-6.  It is doubtful that will be the first round matchup this year, although Petaluma playing Cardinal Newman or Rancho Cotate isn’t out of the question.
There might be one other team from the SCL in the Division 3 playoffs and that is Sonoma Valley.   Despite the record they are eligible for a spot.  That is because they are 1-1 against Division 3 teams and end up the regular season against Division 4 Elsie Allen.    The win that made them eligible was a 13-5 win over Petaluma, which opened league play and is Petaluma’s only league loss.  They are a bubble team and they aren’t the only 3-7 team up for consideration.

Two other SCL teams look like they are in.  That is Piner and El Molino, who are in Division 4 and meet to wrap up the regular season.   Both teams are NCS eligible.  Really the question is not whether the two teams will make the playoffs, but if they will get a home game in the first round.   That might be what the two teams are playing for.  Although, they could be playing for the dreaded No. 9 seed.   That would mean a road game in the first round and then a trip to No. 1.   Piner was a No. 9 seed last year.  They got the road win, before losing to No. 1.
The winner of this game will clinch finishing over .500, whether they lose a first round playoff game or not.
That is quite a daily double that both of these teams can finish over .500.  The last time these teams both had this kind of season was 2003 when Piner went 7-5 and El Molino went 6-6.  That was the last time both teams made the playoffs.  Since then they have been to the playoffs once, El Molino in 2010 and Piner last year.     They both took advantage of a playoff spot to get a playoff win.
For a league that doesn’t have a good reputation.  A potential six out of seven in the playoffs isn’t bad.
NCL I
Clear Lake (3-6, 0-6) at No. 4 Fort Bragg (7-2, 5-1)
CAL PREPS PROJECTION:  Fort Bragg by 32

Kelseyville (5-4, 2-4) at Willits (3-6, 1-5)
CAL PREPS PROJECTION: Kelseyville by 5
The NCL I race has almost mirrored the NBL all season.   Going into the last week there is no difference.  Well there is one difference.  The NBL could end in a three way tie.   The NCL I race could be a four way tie.
It appears the only way Fort Bragg doesn’t get the automatic bid is if they lose to Clear Lake and St. Helena defeats Cloverdale.   In that case St. Helena would win the league outright.
It appears Fort Bragg wins any tie-breaker.    The only question is if there was a four way tie.  For that to happen, Fort Bragg losses to Clear Lake, Cloverdale beats St. Helena and Middletown beats Lower Lake.  The tie would be between Fort Bragg, Cloverdale, Middletown and St. Helena.   Head to head Fort Bragg and Cloverdale would both be 2-1 against the tied teams. You could go two ways from there.   Fort Bragg beating Cloverdale in head to head or if they went to the numbers drawn before the season, Cloverdale wins.  A three way tie (Middletown losing) goes to Fort Bragg, because they beat both St. Helena and Cloverdale.
Wasn’t that simple?
Fort Bragg is in Division 4, while the other three teams in the potential tie scenario are in Division 5.  Joining Fort Bragg in Division 4 as potential playoff teams are Lower Lake and Kelseyville.
If Fort Bragg is upset by Clear Lake it would probably cost them a first round home game.    If they win, that first round home game could be against Lower Lake.
While Lower Lake appears to be in, Kelseyville, who is already eligible, is a bubble team and would probably need a win over Willits to get picked.
The other teams are in Division 5.  St. Helena is highest in the power rankings at No. 2.  Salesian will be the No. 1 seed.  It is doubtful that there will be a full sixteen team bracket, so some of the higher seeds could get a first round bye.
Middletown and Cloverdale are in good shape for a home game in the first round (unless they meet a league champion).    If the seedings play out the way the power ratings are right now, Cloverdale would meet St. Vincent, who is the automatic bid from the NCL II  (see below).   That would mean Cloverdale would have to go on the road.
Based on power rankings, Clear Lake would make the Division 5 playoffs,  but because they don’t have a .500 record in any of the categories needed, they don’t qualify.
NCL II
Upper lake (0-9, 0-5) at Calistoga (1-8, 1-4)
CAL PREPS PROJECTION: Calistoga by 11

SATURDAY
Tomales (7-2, 4-1) at St. Vincent (5-4, 5-0)
CAL PREPS PROJECTION:  St. Vincent by 18
St. Vincent has clinched the automatic berth in the NCS playoffs.   Even if they lose to Tomales, which would mean a co-championship, St. Vincent gets the automatic berth because of numbers drawn at the beginning of the season.  If Tomales wins the head to head would be a split forcing the use of numbers.  If St. Vincent wins, they win the title outright.  St. Vincent won the first game 40-6.
St. Vincent and Tomales will be the only teams to make the playoffs and both are in Division 5.   St. Vincent will get a home game if they meet a team that didn’t win its league (see Cloverdale example above).
Tomales will be headed on the road.
We will see how much this preview is really real on Sunday.
JC FOOTBALL
Foothill (1-7, 0-3) at No. 11 SRJC (6-2, 1-2)
KSRO 1350 AM-103.5 FM; 5PM

Unless they host a bowl game, this is the last home game of the season for the Bear Cubs.
Last week the Bear Cubs snapped a two game losing streak with a 41-10 win over DeAnza.   Christian McAlvain threw for 295 yards and three touchdowns.  McAlvain now has eighteen touchdown passes, which is tenth in the state.
Foothill got its lone win in the opening game of the season, 27-24 over Sequioa.   Sequioa only has one win on the season, which was a 16-13 victory over DeAnza who is winless.
SRJC ends the regular season at Diablo Valley next Friday Night.
My email address is jacpasquini@comcast.net
Share