Rancho Cotate rallies to Stay Even In NBL Race 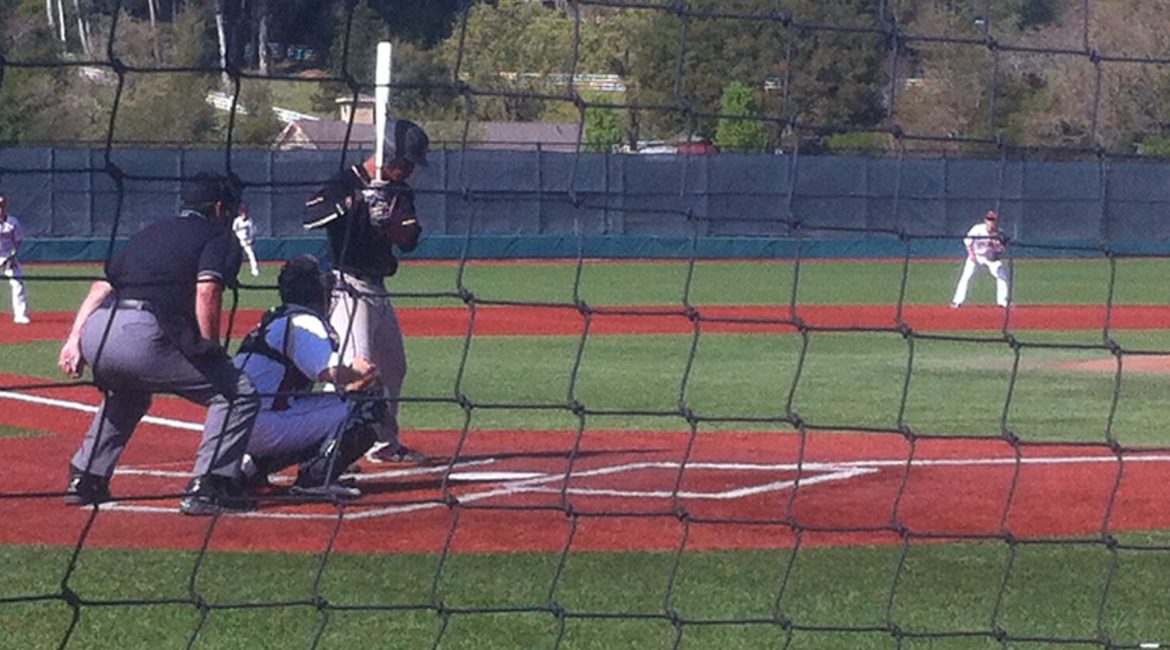 It looked like it was set up for a typical No. 3 Montgomery victory for the 2013 season.  The theme has been falling behind and then rallying to win.   That was the way the NBL game with Rancho Cotate was playing out and the Vikings were three outs away from staying tied for first place in the NBL race.
They never got them.
No. 5 Rancho Cotate turned the tables, scoring two run in the seventh to take a 4-3 win and they take the position of being tied for first place with No. 1 Casa Grande.
Rancho Cotate pulled off the winning rally, getting one ball out of the infield.   They got a couple a breaks and then took advantage of it with the gutsiest play in baseball.
The rally came just moments after Montgomery had scored an unearned run to take its first lead of the game at 3-2 in the bottom of the sixth.
The rally began on the first break when on an 0-2 pitch, Owen Sunke was hit by a pitch .  That was followed by the ball that got out of the infield, which was a single to right by Kevin McGuiggen to put runners at first and second.
Then came break number two.
Rancho Cotate was trying to move the runners up on a bunt by Will Felton.  The bunt was a good one and Montgomery made an attempt to get the runner at third, which was too late and the bases were loaded.
Ryan Haug then hit into a force play that brought in the tying run and put runners at first and third.
With Chris Delsanto batting, Rancho Cotate went all in by going for a suicide squeeze.  Right before the 1-1 pitch Delsanto, was called for a quick conference with third base coach.  It was to make sure Delsanto knew what was planed. As the pitch came, so did McGuiggan from third and Delsanto got the bunt down to bring in the lead run.
Anthony Sosa, who came in to get the last out in the sixth, got the last three outs in the seventh to pick up his second win of the season.
A two run double by Ryan Walsh gave Rancho Cotate a 2-0 lead in the third.   But as they have done all season Montgomery rallied, tying the game with two runs in the fifth and taking the lead in the sixth.
The win gives Rancho Cotate a 3-0 record in NBL play.   The Cougars had got a jump in league play because of a schedule that sent them to Southern California last week when the rest of the league opened play.  It was its first league game since March 15th.
Casa Grande joined Rancho Cotate at 3-0 after scoring a run in the seventh to edge Ukiah 2-1.   It was Casa Grande’s third straight one run win in league play.
Cardinal Newman joined Montgomery at 2-1 with a 4-1 win over Santa Rosa.  Ridge Etchell pitched a complete game, striking out ten for the Cardinals.  Cardinal Newman is at Rancho Cotate on Friday.
Also Maria Carrillo busted out for a season high 19 hits in an 11-1 win over Windsor.  Both teams were looking for league win number one.
The headline game for Thursday is Sierra at SRJC in the second game of its three game series for first place in the Big 8.   On Tuesday Sierra took the first game of the series with an 8-3 win to take a one game lead over SRJC in the league race.
My email address is jacpasquini@comcast.net