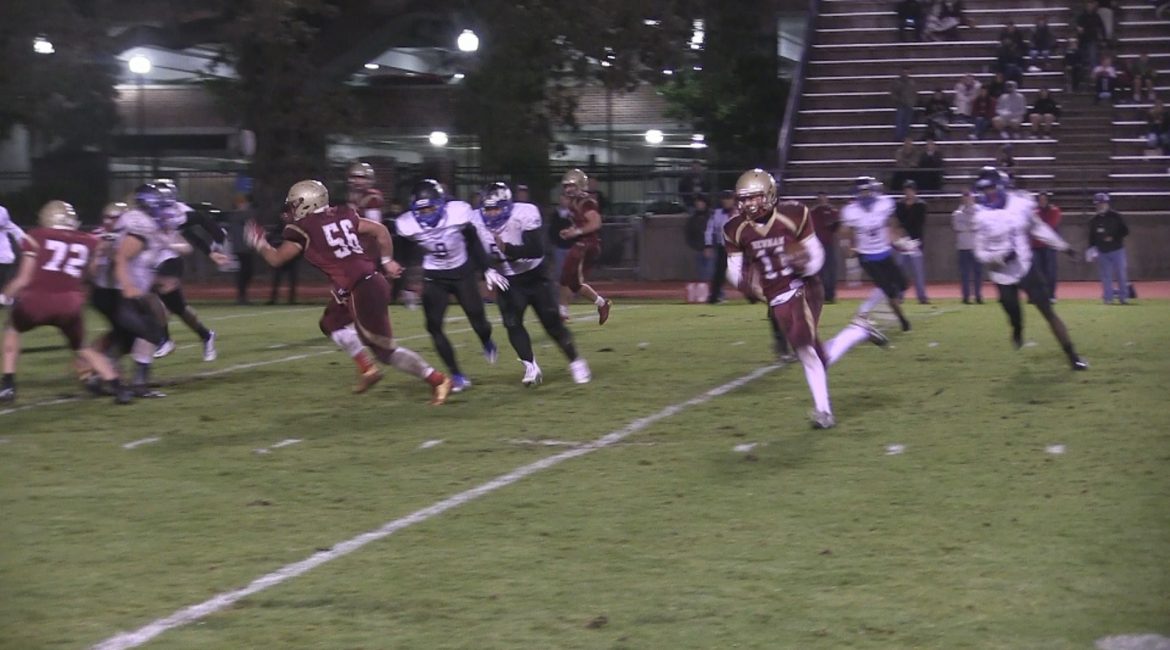 Well, we got our trilogy. The two best teams in the area, going head to head one final time this season for a spot in the North Coast Section Division 3 Championship game, Friday night @ Santa Rosa Junior College, at 7pm. Here is what CalPreps.com is projecting: Rancho Cotate (Rohnert Park, CA) 35-34
Here are YSN365.com video highlights from the first two games
10/23/17-http://www.ysn365.com/video/video-cardinal-newman-vs-rancho-cotate-10-23-17/
11/4/17-http://www.ysn365.com/video/video-nbl-football-rancho-cotate-vs-cardinal-newman-11-4-17/
How Rancho Cotate got here: Wins over Las Lomas (42-10) and Eureka (38-35)
How Cardinal Newman got here: Wins over Kennedy of Fremont (49-7) and Encinal (49-32)
Jake Simmons has thrown for 3261 yards and 44 touchdowns. Just 7 interceptions and His QB rating is 137.3. Simmons has also ran 97 times for 646 yards and 13 touchdowns. In total, 354 yards per game, but playing on a grass surface and a wet football could affect some of those statistics. Logan Reese is going to be a key receiver for the Cougars. He has 50 receptions for 1127 yards and 20 touchdowns. Look to him to be Simmons’ first look in their passing game. In Rancho’s lone loss, at SRJC, they only scored 28 points, their fewest of the year. Another cold and wet night could be an X factor in this game.


Cardinal Newman is used to playing on a grass field, as most of their home games have been at SRJC the past few weeks, this is an advantage for the Cardinals. Beau Barrington has thrown for 2103 yards and 24 touchdowns, and rushed for 439 yards and 12 touchdowns on 90 carries. Tanner Mendoza has been effective all year on the ground for the Cardinals. He’s carried the ball 133 times for 1090 yards and 21 touchdowns. He’s also been stifling on defense, totaling 101 tackles on the season. Dino Kahaulelio has 29 solo tackles and 81 total tackles. These two will be key on defense if they want to hold Rancho’s offense so their offense could get on the field.
Again, an X factor in this game could be the playing surface. Cardinal Newman is used to playing on a grass surface, unlike Rancho Cotate. A wet football and a wet field could give the Rancho Cotate players a hard time with footing, catching and holding onto the football. Expect a very close game, coming down to the wire, just like the NBL Title game.
Share