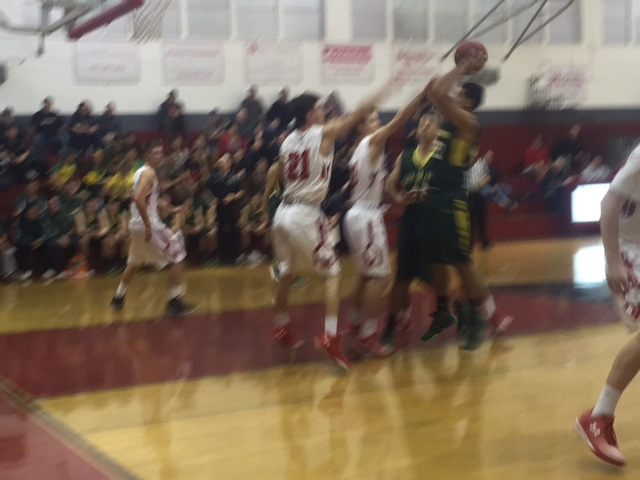 With Santa Rosa playing Cardinal Newman we have seen that kind of start before. Cardinal Newman jumping out to a big lead, then usually they would cruise to a one-sided win. This time it was different, as Santa Rosa did make it a game, but in the end the start was too much and Cardinal Newman held on for a 51-45 win.
Santa Rosa, who falls to 9-9 overall, had high hopes that this would be the year to get a win at Cardinal Newman for the first time in at least over a decade.
Then came that start.
A little more than two minutes into the game, Cody Baker had hit two 3’s and Conor McCarthy put in two more offensive rebounds and Cardinal Newman had a 10-0 lead. Baker scored a team high 11 points, all of them in the first half.


Santa Rosa’s first field goal was a three point shot by Kalei Aukai. It came with :45 left in the first quarter. By then, six different players had score for Cardinal Newman and they had an 18-1 lead.
Unlike other years, Santa Rosa didn’t go down without a fight. It took a while for them to sneak back into the game. Cardinal Newman, who goes to 11-6 on the season, usually had a double digit lead. The biggest was 18, which they had a couple of times. The first time was at 26-8 with five minutes to go in the first half. The last time was after the first basket of the third quarter which made it 33-15.
Then Santa Rosa made its move. Four different players combined for an 8-0 run to cut the lead to 33-23 with 5:30 to in the third quarter. After Cardinal Newman scored a hoop, Tommy Levine hit a three to cut it to 35-26. It was the first time since 10-1 that the lead was single digits. Levine led the charge by scoring seven of his game high 12 points in the third quarter.
Another basket by Levine capped a 17-6 run and Santa Rosa was down 38-32 with three minutes left in the quarter. They wouldn’t score the rest of the quarter, but Cardinal Newman couldn’t take full advantage only scoring one hoop themselves to take a 40-32 lead into the fourth quarter.
A three pointer by Aukai, part of his 11 points, opened the fourth quarter to cut the lead to 40-35. Back to back baskets by Jalen Dural reestablished a nine point lead for Cardinal Newman. Then was a series that hurt the Panther comeback bid. After missing two free throws, Santa Rosa played tough defense for the next thirty four seconds. Seth Doolittle, who scored ten points, threw up a desperate three point attempt as the shot clock was running out and was fouled. He hit all three free throws and Cardinal Newman had a 47-35 lead with 4:44 to go in the game.
Santa Rosa had one more run in them. Back to back three’s by Anthony Gallegos and Levine ended an 8-2 run to cut the lead to 49-45 with 1:24 left. Santa Rosa made two stops, but couldn’t take advantage of them, missing a three point shot and committing a turnover. Trevin Anderson-Soria hit two free throws with :28.7 left to end the scoring.
Windsor now has some space in the NBL race. They have won seven straight and are 15-3 overall and 6-0 in league play. That is good enough for a two game lead over Cardinal Newman, Montgomery and Santa Rosa, who are all 4-2.
Montgomery moved into that tie by holding off Casa Grande 45-40 behind 17 points by Joel Seitz.
Don’t sleep on Ukiah who is in the battle for the final NBL post season playoff spot. After an 0-3 start they have won three straight and are only one game behind the logjam for second. On Thursday, Sammy Mora scored 23 points to lead them to a 76-58 win over Maria Carrillo.
The first half ends on Monday with one of the games being Montgomery at Santa Rosa.
NBL GIRLS THE SAME LOOK
No. 1 Cardinal Newman has matched the Windsor Boys two game lead. On Wednesday, Maiya Flores scored 23 as they pulled away in the second half for a 83-49 to raise their record to 14-4 on the season.
This was actually the closest league game that Cardinal Newman had in nearly two years. At halftime they had a 37-33 lead before dominating the second half.
Casa Grande lost to Montgomery 49-30 behind a 15 point, 22 rebound game by Shayla Newman. So like the Boys race, there is a three way tie for second. This one is between Casa Grande, Montgomery and Santa Rosa. Also like the Boys race, Ukiah is 3-3, one game out of that final playoff spot.
On Friday Night, Santa Rosa hosts Montgomery.
On Saturday afternoon, Casa Grande hosts Cardinal Newman.

SCL CLOSER
Analy and Piner are tied for first in the Boys race at 5-1 after the results on Thursday.
Three scored in double figures to lead Analy past Elsie Allen 48-37. Analy is now 14-6 overall on the season.
Meanwhile Scott Erickson scored 18 points and Sean Terry had a double-double with 14 points and 15 rebounds as Piner went overtime to defeat Sonoma Valley 59-55. Sonoma Valley is now 2-4 in league play. They have lost to both Analy and Piner in overtime.
Petaluma won the battle for third place and is one game behind the two leaders after a 61-44 win over Healdsburg. Ryan Perez led the Trojans with 18 points as they moved to 12-7 on the season.
For the Girls, Analy has a one game lead over Healdsburg and Sonoma Valley.
On Friday Analy hosts El Molino
On Saturday, Healdsburg travels to Sonoma Valley.
There is one first place showdown on Friday. That is a NCL I Girls game with Middletown going to Kelseyville. Both teams go into the game 5-0.
My email address is jacpasquini@comcast.net
Share