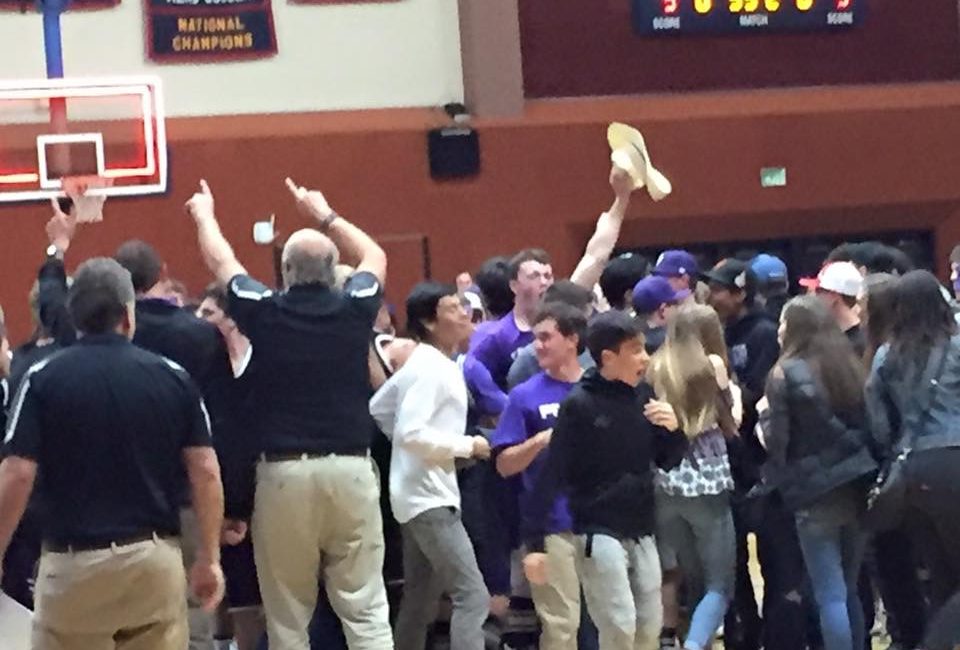 BOYS—PETALUMA 27 ANALY 26
Looking at the score you might assume that this was a boring game.
You would be wrong.
This score was so low because of some aggressive defense that went right to the end.
Analy had the ball with :09.1 left in it back court. The inbounds pass went to Travis Holmes who dribbled nearly the length of the court and had a layup like shot in heavy traffic that fell off at the buzzer and Petaluma had survived.
The film of this game will not go into any offensive hall of fame. It might be eligible for some defensive hall of fame.
The poster child for the defensive gem was Analy’s 6’ 7” center Jordan Armstrong. He put on a dominating performance pulling down twenty rebounds and blocking three shots. Although he stood out all night, one possession really stood out. With Petaluma leading 27-26 in the last minute he got an offensive rebound. He missed the returned and Analy came down and in one possession he blocked two shots to get Analy back the ball with :15 left in its first of two chances to win the game. That first possession was stopped by a block by Petaluma’s Ryan Cox.
Despite the defensive form of this game, there were five ties and two lead changes in the first half. Joey Potts’ tip in gave Petaluma a 14-12 halftime lead. That set up the most fluid offense of the night. Kelly Garber scored four of his game high 10 points in a 9-0 run to give Petaluma a 23-12 lead halfway through the quarter. Garber was the only player in the game to score in double figures.
The way the offense was going that seemed to be it. The Petaluma student section felt so confident they started chanting, “double digits”.
They should have known better.
Petaluma would not score again for the next five minutes and thanks to Armstrong scoring four of his team high eight points, Analy had cut in to 23-19. Petaluma would only score two more baskets the rest of the game. How ironic it was, that last basket came with four minutes left after another strong defensive stand by Analy, Drake Paretti threw up a wild twenty footer to beat the shot clock that banked in. That turned out to be his only points. It also turned out to be the game winner.
Petaluma wins its second ever SCL Post Season Championship and are now 19-8 on the season. They are one win away from winning twenty games in a season for the first time since who knows when.
Analy falls to 20-8 and because they won the regular season outright and will get the automatic berth for the SCL for the NCS playoffs.

CLOVERDALE NIGHT
Both the Cloverdale Boys and Girls won the NCL I post season tournament at Mendocino College in Ukiah.
Jayson McMillan scored 19 and Gage Hoover added 16 to lead the Cloverdale Boys past Fort Bragg 55-42.
Fort Bragg led 12-8 after one, but then Cloverdale outscored them 34-15 in the next two quarters.
Cloverdale also won the regular season championship and is 24-4 on the season.
The Cloverdale Girls led from the start and upset Middletwon 42-29. Angel Bernardi led the Eagles with 14 points, as they go to 23-6.
Middletown, who falls to 23-7, ended the league race tied with Kelseyville. They get the automatic NcS Berth because they did better in the post season tournament than Kelseyville did.
That was mainly because Kelseyville had to play Cloverdale first, who beat both teams in the tournament.

TIEBREAKER
Roseland University Prep pulled away in the fourth quarter to defeat St. Vincent 49-41 in a game that decided the automatic berth for the NCS playoffs for the NCL II Boys. Pablo Avendano, Harry Gonzalez and Francisco Valdez combined for 36 points.
Roseland University Prep is 20-7 on the season. It is the third straight season they have reached the twenty win mark. Roseland University Prep might have needed the win to get into the NCS Division 4 playoffs and because of the league champion rule they could get a home game.
St. Vincent is 21-5 and is in Division 5 and could still get a home game.
UP NEXT
Today the picks will be made for the North Coast Section playoffs. There are six divisions in basketball. The local teams should be well represented.
My email address is jacpasquini@comcast.net
Share