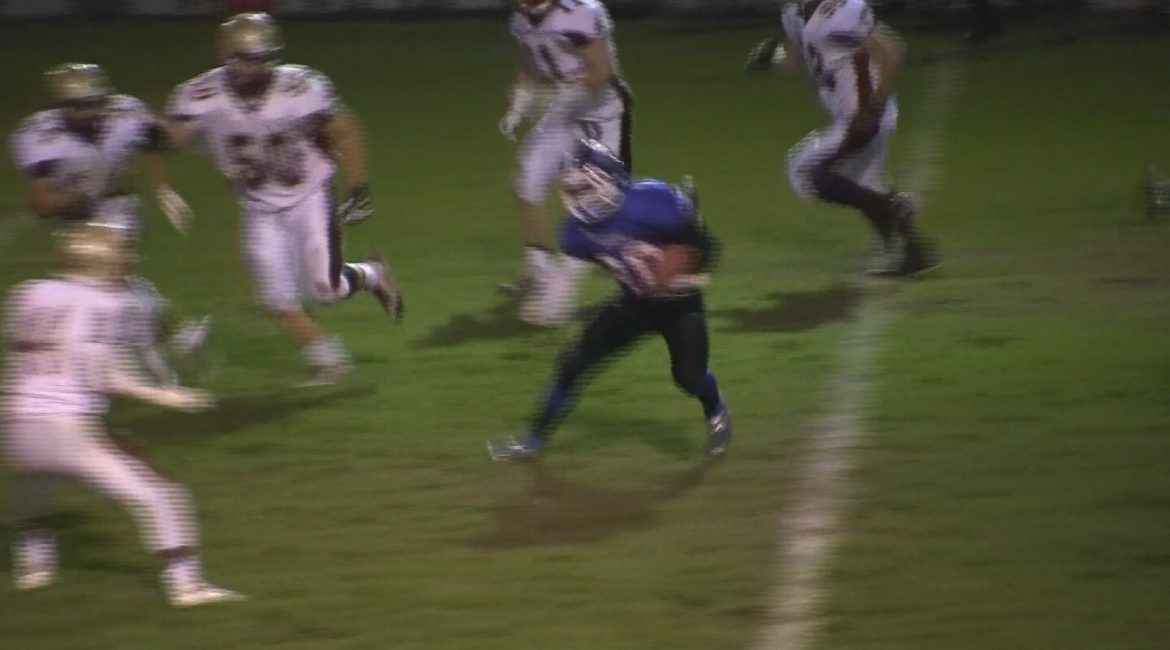 Sometimes in sports there is a matchup, which is for whatever reason dominated by one team (or person), no matter how good the team or player is.

We saw that in the NFL on Sunday with Brady beating Manning again.  Most people would want Payton Manning on their team, as long as he isn’t playing a Tom Brady team.

In the high school world, most programs would like Middletown’s track record as long as they aren’t playing Salesian.  Salesian plays Brady and Middletown plays Manning.

Middletown has played Salesian every year to start the season since 2006.    They have also met three times in the playoffs.     Middletown is 1-10 against Salesian during that time and 69-13 against everyone else.

The most amazing thing about the playoff thing is the first two games were played as Division 4 teams.  When Middletown moved down to Division 5 this season they might have thought, phew no Salesian come playoff time.

The 21-13 win by Salesian was the closest of the three playoff wins over Middletown.  The other two was a one point and an OT seven point game.

When combining all five divisions there have been 48 playoff NCS high school football playoff games.  You have to work hard to find a close game.

Six games have been decided by seven points or less while 21 have had a bigger spread that 28 points.

Division 3 has been the most one sided.  In ten games, there was one game decided by seven points or less (Analy 33 Cardinal Newman 30).  Six have been decided by over 28.

The closest game in Division 5 so far is the 21-13 Salisian win over Middletown.  That division had three of its six games decided by 28 points or more.

Division 1 has had three games decided by 7 points or less.  It is the only division that has had more than one.

Both the games involving the local teams this weekend are No. 1 vs. No. 4 with No. 4 Analy at No. 1 Marin Catholic in Division 3 and No. 4 Montgomery at No. 1 Casa Grande in Division 2.  Both games are played Saturday.

After winning the NBL championship, Maria Carrillo took both the Boys and Girls the Division 2 Championship at the North Coast Section Meet, which were held last Saturday at Hayward High School.   It was the second straight NCS champions for the Boys and third straight for the Girls.  All team members will be going to the State Meet, which is this Saturday in Fresno.

Both Maria Carrillo teams had the second place runner in both the boys and girls race.   Ryan Anderson finished second in the Boys race and Shaz Breedlove.

The Maria Carrillo teams aren’t the only local teams or players to go to the state meet.   The top three teams in each division qualify for state, as does individuals whose teams didn’t qualify.

Casa Grande, who just missed sharing the NBL championship with Maria Carrillo in both the Boys and Girls race, came in second in the Boys event and third in the girls so both of their teams are going to state.

It looks like we will be hearing from the Casa Grande team again, especially the Girls who has no seniors on the team and has four sophomores, two juniors and one freshman.  The Boys team has three juniors, a sophomore and freshman.

The other team to qualify was Piner, who finished third in the D4 Boys race.    The winner of the race was Efren Reyes, who is joined at state by teammates Eduardo Calderon, Jacob Hayes, Aidan Carpenter, Jonathan Lopez, Harris Nguyen and Miguel Garcia.

Craig isn’t the first Bergman to get this award.  His dad Bruce won it in 1985 when he was coaching the Cloverdale Girls basketball team.

HAVE A NICE THANKSGIVING