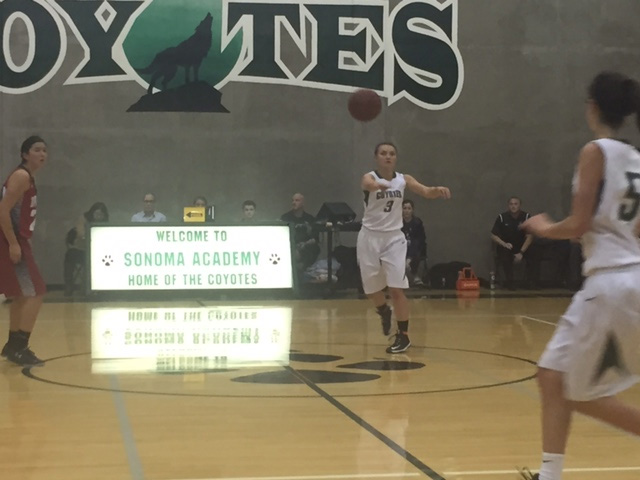 With the high school basketball season league races close to reaching the halfway point, the Santa Rosa Boys Basketball team is in sole possession of second place in the North Bay League.
Think about that for a second and let it soak in.


Santa Rosa is one of several teams that in years past you could take for granted, but not this season. Two other teams are the Petaluma and Healdsburg Boy teams, who also meet Thursday Night in Petaluma. Those teams probably, emphasizing the word probably, won’t win a league championship, but they could and have had an effect on who does.
Santa Rosa goes into Thursday’s game at Cardinal Newman 9-8 overall, 4-1 in NBL play and Ranked No. 8 in the latest YSN365.com rankings. The lone league loss was to No. 1 Windsor and that wasn’t a close game.
There are two games left in the first half and after the trip to Cardinal Newman, the Panthers host Montgomery next Monday. Cynics will say, “No wonder they are where they are.” That would be a short sided view.
Since the Max Preps era began in 2004, four league wins is a good season. Only once during that time have they won more than four and that was in 2007 when they went 6-8. Every other year it was four league wins or less. They reached double figures in victories twice, one was last season when they went 11-14. The other time was 2007 when they 10-15.
They are going into the weekend with two big games with playoff hopes. That hasn’t been a sentence used for Santa Rosa Boys Basketball for a long time.
Petaluma and Healdsburg are both 3-2 in SCL play, one game behind No. 3 Analy and No. 7 Piner. To be mentioned in this conversation is a huge upgrade for these teams.
Petaluma is 11-7 overall. During the Max Preps era they finished 14-13 in 2005 and 11-17 in 2009. Since the 2009, the most wins overall was seven, which they did twice and the most league wins are five.
The last two seasons Healdsburg went 12-40 overall and 4-20. Healdsburg has handed Analy their only league loss.
Some new blood involved in some important games.
SONOMA ACADEMY GIRLS STAY UNDEFEATED
The old saying in sports in defense wins championship. That was on full display in the biggest game Tuesday Night as No. 8 Sonoma Academy defeated Upper Lake 49-36 in a game between the last two undefeated teams in the NCL II Girl’s race.

Sonoma Academy is not only undefeated in league play, but at 13-0 overall is the only undefeated team in the local area.
The Sonoma Academy defensive focus was on Upper Lake standout Natalie Karlsson. The junior went into the game averaging 22.4 a game. She couldn’t get going and was held to seven points before fouling out late in the fourth quarter. It was only the second time in 17 games that she didn’t score in double figures.
To say it was only defense that won the game for Sonoma Academy wouldn’t be true. The three point shot played a big role in things for them. Karlsson wears No. 23, but it was that number for Sonoma Academy who came out of the gates smoking. That number is worn by Stacey Olson, who hit three 3’s for Sonoma Academy first nine points as they surged out to an 11-2 lead. Before the quarter was over Olson would hit another three and score 14 points.
Despite Olsen’s big first quarter and a defense that forced ten Upper Lake turnovers, it was still a close game. In fact a five point Upper Lake run at the beginning of the second quarter made it 16-16. That turned out to be the only tie of the game. On the next possession, the three point shot showed up again. This time it was Lauren Reed, who is Sonoma Academy leading scorer, hitting one to score her first points of the night. She would be heard from in the second half in a big way.
So would the Sonoma Academy defense. After taking a 23-20 halftime lead, they forced seven more Upper Lake turnovers and wouldn’t allow a field goal until there was :35 left in the third quarter.

Again it wasn’t all defense for the Coyotes. Reed hit three 3’s on her way to a game high 15 points. Two of the 3’s were sandwiched around baskets by Clara Spars, which was part of a 10-0 run to start the quarter and a 33-20 lead. The lead wouldn’t get under 10 and would stretch 47-27 with 5:30 left.
Spars ended with 14 points, which matched Olsen who battled foul trouble and didn’t score after the first quarter.
The bright side for Upper Lake, who dropped to 9-8 overall, is the immediate future looks bright. Brenna Sanchez was the team leading scorer with a season high 12 points and pulled down 11 rebounds for her first double-double of the season. She is a sophomore.
Kejhana Taylor had a seven point, eight rebound game and is a junior. Add to that, Karlsson is a junior, so most of the team will be back next season.
Of course it is a little early to talk about next season. Upper Lake is only one game behind Sonoma Academy and the race hasn’t reached the halfway mark yet.
TUESDAY RECAP
In a nutshell most teams that figured to win won.
No. 1 Windsor, for the second straight week, started the week by beating No. 2. This time it was Montgomery 49-30 to raise their record to 14-3. Curtis Johnson and Gabe Knight combined for 28 points and 17 rebounds.
The closest to an upset was in the NCL I Boys. Lower Lake went over time to defeat Willits 65-62 with Jerod Alexander scoring 17.
Lower Lake is 8-7 overall and 4-1 in league. They are in a second place tie with No. 6 Cloverdale, one back of No. 5 Fort Bragg. Both those teams had one sided wins.
My email address is jacpasquini@comcast.net
Share