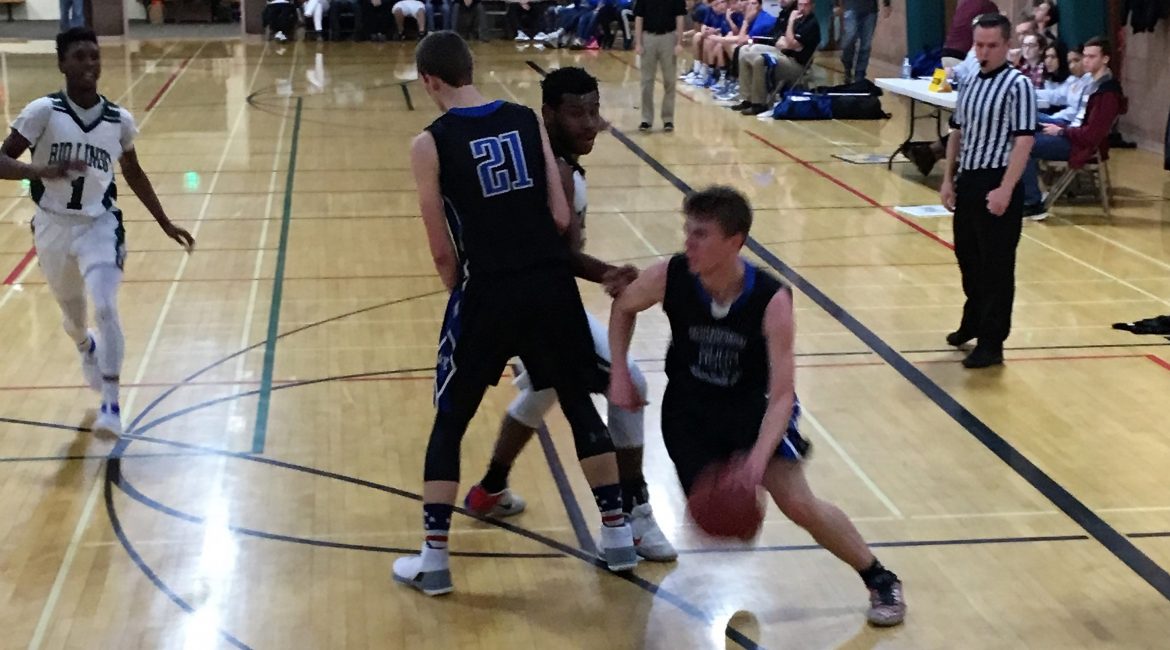 
In a rematch of a January 20th contest that the Rio Lindo Spartans narrowly won 55-53 at RVC, the two local small school heavyweights would clash once again, this time in the NCS Division 6 semi-finals. With California School for the Deaf awaiting the winner in the championship game, we were in for a classic showdown between these two high-powered offenses.
The Rio Lindo gym, with its compact layout and brick wall lining, made it very raucous inside with the noise reverberating off the walls. Both teams held each other scoreless until the midway point of the 1st, but that all changed with RVC sharpshooter Charlie Segale burying a 3 from the top of the key. But the Spartans’ Ruben Valce and Joel Casillas would each respond by hitting one of their own. It was a 12-6 Spartan lead at the end of 1.
Rio Lindo began to put their foot on the gas and push the ball in transition, with freak athlete Julien Boyd blowing past everyone in the half-court set to lay it in. RVC struggled to get open looks on the offensive end and became very careless with the ball, allowing the Spartans to run it back down their throats.
The Eagles’ first points of the 2nd didn’t come until the 3:15 mark, thanks to speedy point guard Willy Chung’s two free throws. Then, with the shot clock running down, Julien Boyd took matters into his own hands, sizing up the Eagles’ zone defense before firing away from long-range and splashing it down. The Eagles’ 6’7” Samuel Edwards then connected with Willy Chung on the backdoor alley-oop to close out the period. There was an apparent lid on the basket for Rincon Valley and they knew it, as they would only make 3 field goals the entire first half; a team field goal percentage of 19%. The Spartans were more than happy to take a 21-11 lead with them going into halftime.
After Boyd’s backcourt mate Koby Brown scored on an opening fast-break, the Eagles eventually found a groove, going on an 8-0 run behind Charlie Segale’s 3-ball and a hard-earned bank shot amongst the trees. RVC’s other renowned sniper Christian Gillette, who dropped 44 points in a win over Tomales (including a school record 13 3’s), let it fly from long range and drilled a 3. But Julien Boyd responded emphatically with his own triple from NBA range. The Spartans would lead 32-24 after three, but the Eagles had found somewhat of a flow offensively.

A Koby Brown 3-pointer and Boyd coast-to-coast lay-in kicked off the final eight minutes, but Charlie Segale nailed huge back-to-back 3’s for the Eagles to keep them within striking distance. It was then just a 38-31 Spartan advantage with 4:30 to play. RVC made up for two more Boyd baskets with another bucket, plus 4 free throws on the other end creeping them to within four points, 42-38 Rio Lindo with under 3 minutes left.
Ruben Valce proved to be huge down the stretch, as he buried a big-time 3-ball to inflate the lead back to seven. The Eagles constantly shot themselves in the foot with just careless turnovers all night, and none more back-breaking than the two following Valce’s 3-pointer. The Spartans would play catch with the ball and force the Eagles to foul. Koby Brown hit his two free throws, while Valce stroked the final four points to put the game on ice: a 51-43 final.
The Spartans were led by Julien Boyd’s 19 points, and Koby Brown with 12. Charlie Segale paced his Eagles with 17 points (4 3’s) and 8 rebounds. Point guard Willy Chung notched 14 points and 2 steals, but had 8 of his team’s 19 turnovers. Although RVC’s NCS title run is over, they do qualify for the NorCal tournament that begins next week and will prepare for that.
The D6 championship game is now set, with #2 seeded California School for the Deaf traveling to top-seeded Rio Lindo on Saturday night for all the marbles.
Share