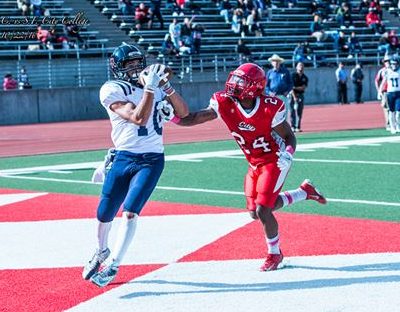 
Otherwise there was a shuffle among the top ten, following losses by two perfect teams. Saddleback climbed from No. 6 to 3 after edging Fullerton, 30-27, in a National Southern League battle and the Hornets dropped from No. 3 to 5. Defending state champion City College of San Francisco moved up to No. 6 from eighth after knocking off formerly No. 2 Santa Rosa, 34-21, in the Bay 6. The Bearcubs fell to seventh. American River took advantage with a 17-7 win over crosstown rival Sacramento and is up two spots to No. 2 this week to rank as the top Northern California team.
The battle for California Community College Athletic Association state playoff berths continues for National Division teams Saturday, with just three weeks of regular season play remaining. Featured in the Northern California Football Conference: The Bay 6’s two leaders (2-0) clash: No. 6 San Francisco at No. 15 San Mateo. No. 13 Diablo Valley plays at No. 7 Santa Rosa, hoping to remain in contention. Two Valley League (2-0) leaders meet — No. 23 Chabot at No. 12 Modesto. (No. 22 Fresno plays at co-leader No. 4 Laney on Friday.)  NorCal League games: No. 2 American River at Feather River, Sierra at No. 8 Butte, Siskiyous at No. 19 Sacramento.
Top Southern California Football Association match-ups: National Central: El Camino at No. 1 Riverside, Chaffey at No. 10 Mt. SAC, No. 11 Long Beach at LA Harbor. National Southern: No. 3 Saddleback at No. 20 Grossmont, Palomar at No. 5 Fullerton, No. 21 Golden West at Orange Coast. National Northern: Moorpark at No. 9 Ventura, No. 14 Bakersfield at Santa Monica, Canyons at No. 25 Cerritos.  Each region will qualify three National league champions and one at-large team to contest the state title, beginning Nov. 19.