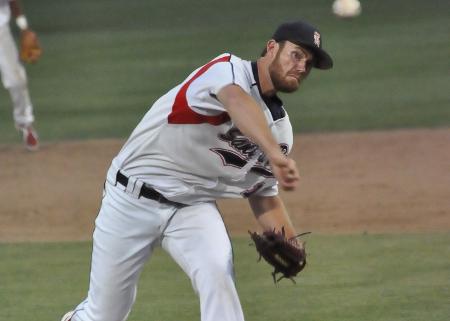 Santa Rosa Holds Onto A Late Lead To Earn The 6-5 Win
Fresno, CA – The Santa Rosa Bear Cubs were led by the Most Valuable Player in North along with the Pitcher of the Year in the North. Their shortstop Jake Scheiner struck out his first time at bat and that seemed to be the only issue he had on the day. He followed his first at-bat with three hits in his next three plate appearances, including a monstrous homerun to left center to clear the high fence at John Euless Ballpark.
The pitching combo of Alec Rennard and Anthony Bender held the Cypress Chargers to 6 hits and just 2 earned runs. Cypress pitcher Tylor Megil had 7 strikeouts in his first 5 1/3 innings of work but allowed all six runs given up by the Chargers.
Myles Andrews had two hits for the victories Bear Cubs while the only player with multiple hits for the Chargers was leadoff hitter Aaron Case. The Chargers were able to mount their normal late inning heroics but unlike many times this year they were unable to pull out the late victory. The 9th inning for started off with hit by Nick Reeser down the left field line followed with a Bo Coolen walk, putting the tying runs on the bases for Cypress. Nathan Rodriguez put a bunt down the third base line that was thrown away by the third baseman. Reeser was running hard scoring on the sacrifice. That left the tying run on second and the winning run on first. With no outs a Paul Gomez sac bunt moved the runners up to second and third. With what looked like a tough situation with the winning run in scoring position, Bender showed great grit and was able get pinch hitter Cory Wildhagen to strikeout and leadoff hitter Case to hit a fly ball that leftfield Mitch West put away for the final out of the game.

Golden West Defeats Delta, 8-6, In Game 1 At State
Fresno, CA – San Joaquin Delta made the trip back to Fresno where they have been runner-up in state each of the two previous years. They enter the state tournament this year with a perfect 6-0 postseason record. Golden West came to state winning their first game of each postseason series, extending that streak today by defeating Delta, 8-6, to open the state tournament.
Delta jumped on the board in the 1st inning by Nik Poirier with a double to right field and advanced to second on a ground ball, scoring on a wild pitch.
Golden West was able to tie the game in the bottom of the 2nd when John Shattles singled home Cody Marshall. Delta was able to quickly take the lead in the third putting up three runs by doubles from Eddie Sievers and Vidales, along with a single by Nik Poirier. Golden West waited just over an inning when Marshall lead off the bottom of the fourth with a single. On two outs John Shattles had an infield single where he slid head first into first base to beat the throw by the second baseman. Knapp and Tyler Depreta proceeded to get on base, loading the bases for leadoff hitter Christ Rodriguez. Rodriguez hit a fly ball just outside the reach of the diving center fielder for a triple which cleared the bases to give Golden West a one run lead. Delta scored in the sixth inning on a sacrifice fly by Shea Sbranti to tie the game until the bottom of the eighth when Delta recaptured the lead with Poirer’s single to right field, who eventually scored on a fly ball off the wood bat of Joe Montes down the right field line for a double.
Delta showed great defense through the first seven innings of this afternoon’s game, but let that slip in the 8th when Mustangs gained a one run lead. Their closer Calvin Riley entered the game to replace Mikey Wright. The inning started with an error on the second baseman, with the runner advancing to third after two outs and then the wheels came off. A single by John Shattles up the middle followed by a poor throw to first allowed Shattles to advance on the play. Phillip Knapp hit a ball to first which went off the first baseman and into right field for an error. A great throw by Marcus Vidales to the plate would have been in time, but was dropped by the catcher and allowed Shattles to score. Golden West put up another run later in the inning to finish the game with eight runs.
Delta will now play at 10:00am on Sunday, facing the loser of tonight’s game between Santa Rosa and Cypress. Golden West advances in the winner’s bracket and will play the winner of tonight’s game on Saturday at 2:00pm.