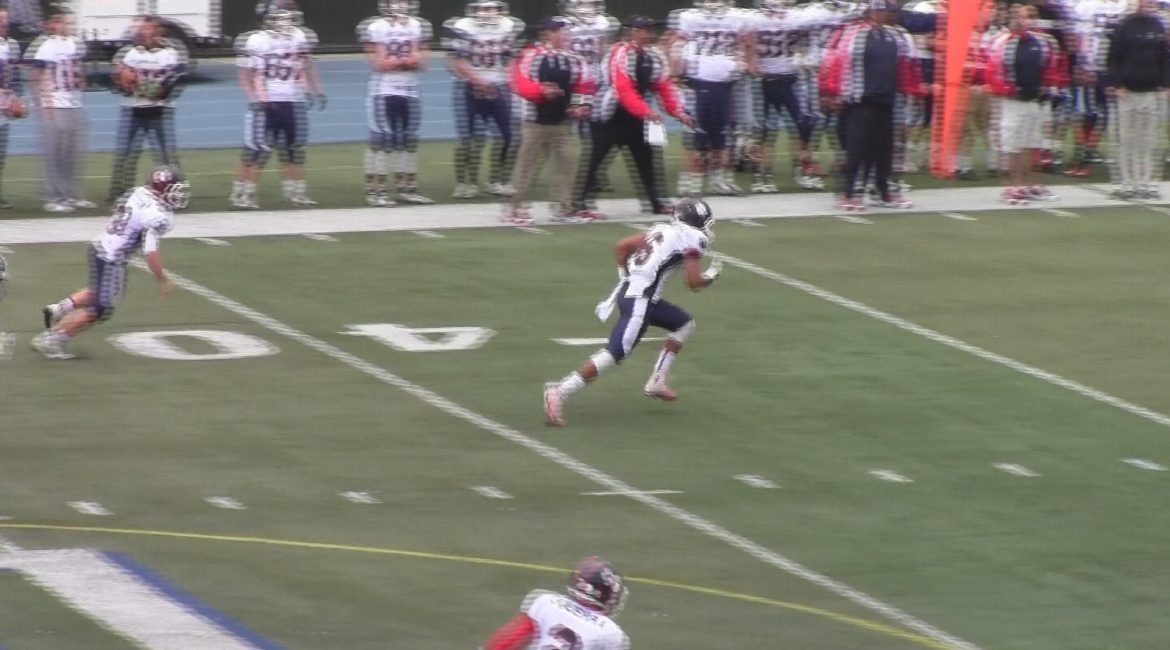 If there was one thing you could rely on in this high school football season, it was that the Rancho Cotate football team would score some points.   They may have had issues stopping teams at times, but the offense was pretty much unstoppable.
Rancho Cotate went into the NCS Division 3 semi-final game at Marin Catholic, averaging 40 points in a 9-3 season.  Even in the three losses, the Cougars averaged 30 points a game.
So you would figure in a game that the defense turned in one of its best performances of the season, they would be in good shape.
Think again.

The Cougars were five minutes away from being shutout.  Only a defensive play, which gave them the ball in great field position, saved that from happening. The result was a 28-6 loss to Marin Catholic and the end of a very good season.
It started out promising enough.  On the first series, Rancho Cotate hit a 51 yard pass play to Justin Zinnerman and three plays later Carlos Franco was going 24 yards for an apparent touchdown and things looked good for the Cougars.
The promising thing lasted for about a second.
The touchdown was wiped out by a penalty.  Rancho Cotate was forced to punt.   That even had a bright side to it, as it was downed at the 1.
That would be the last bright moment for Rancho Cotate, until it didn’t matter anymore.  Actually by the time Rancho Cotate got its next first down, it turns out, the game was over.

Marin Catholic started that drive at the 1 and went on an 11 play march that ended on a 23 yard touchdown pass from Daruis Peterson to Paul Kunst.
After a three and out, Kunst returned a punt 65 yards for his second score and before the first quarter was over Marin Catholic had a 14-0 lead.
Rancho Cotate did have a couple of chances in the second quarter, but couldn’t score.   Once they turned it over when they went for it on a 4th and 13 and were in field goal range.  The next time they lined up for a field goal that never had a chance, because of a mishandled snap.
That wasn’t the worst part.  Joey Trono, one of the big offensive weapons, injured his knee in the second quarter and didn’t return.
It was a dissasterous first half and Rancho Cotate never got back in the game.  A team that averaged over 400 yards a game, barely went over 200 in this one.

A hope for a turnaround in the second half was short lived, when Marin Catholic went on a 80 yard drive that ended on touchdown pass No. 2 for Peterson.  Just for good measure, Rickey Sell, who recovered a Rancho Cotate fumble the first time they had the ball in the first half, intercepted a Mefferd pass and returned it ten yards on the second possession and it was 28-0 early in the fourth quarter.
The only bright side was Rancho Cotate didn’t get shutout.  The score was set up on a pass interception by Chris Taylor- Yamanoha which he returned to the 4.   Two plays later, Carlos Franco went in from two yards out.
It was a disappointing ending to a sparkling season, which included sharing the North Bay League championship.
WATCH THE VIDEO HIGHLIGHTS

CHAMPIONSHIP GAME
No. 1 Salesian (10-2) vs. No. 3 St. Helena (12-1)
FRIDAY DECEMBER 5TH
7 PM
AT ALHAMBRA HIGH SCHOOL
There were times during the season when St. Helena looked like the best shot of the local teams to make a state playoff game.  That won’t happen, but they are the last local team still standing.
St. Helena made the long trip north worth it, as they came home with a surprisingly easy 37-14 win over St. Bernard Catholic.  Both teams went into the game 11-1.
The St. Helena’s defense didn’t stop, but controlled the high octane passing offense of St. Bernard Catholic.  Quarterback Noah Davis, who threw for over 4,500 yards on the season, did throw for 311 yards, the ninth time this season he hit the 300 yard mark.   But he only threw one touchdown, the least he threw since the opening game of the season and he threw a season high three interceptions.
The first interception was a game changer.  With St. Helena already ahead 7-0 in the first, the Crusaders were driving for a tying score when Robert Archer returned an interception 82 yards for a Saints score. Edgar Gonzalez added a 37 yard field goal in the last minute of the opening quarter and it turned out that the 17-0 lead would be all the points they would need.
St. Helena quarterback Jack Preston, who went over 1,000 yards in passing and rushing this season, rushed for a game high 133 yards which included a 27 yard run with 8:50 left in the fourth quarter, which gave St. Helena a 31-0 lead.   It was part of a 350 yard rushing game for St. Helena.
The win ties St. Helena for the most wins in school history.   They will go for the school’s first section championship since 1977, next Friday against No. 1 Salesian.