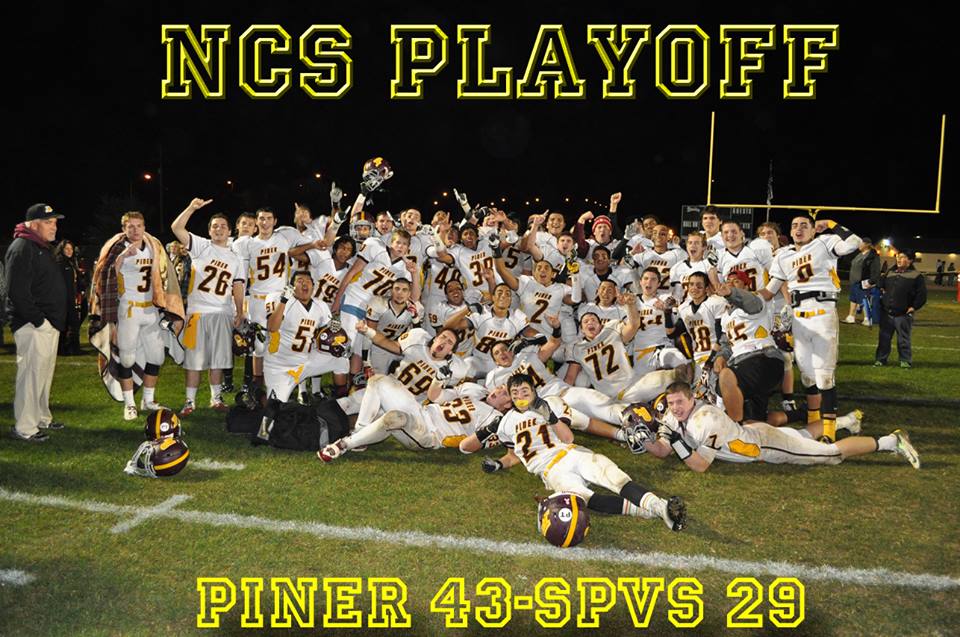 When I woke up Friday Morning and saw the Press Democrat Sports page, it hit me.

We were doing the wrong game on the KSRO game of the week.

Where were you on November 29th, 2003?   On that night, Casa Grande defeated Piner 27-0 in the second round of the North Coast Section Division 3A Redwood Empire playoffs.   That was what the division was called back then and a week later Eureka defeated Casa Grande in the Championship Game.

It was the last time that Piner was in an NCS playoff game.  But that is only part of the story.   The next two years Piner went 3-7, which would be its best record until last year.  They won 11 games from 2006 to 2011.  That is average of fewer than two wins a year.

That was a typical game for Piner during the decade.   The losses were bad, but really weren’t as bad as the score indicated, because they could have been worse if an opponent wanted to really pile it on.

Next up was a combination of new coach and realignment.  The combination has worked wonders for the football program that two years ago looked in trouble.

The new coach was John Antonio.  During his first season he felt what the other coaches the past decade felt.   They started 0-6 with the closest game a 56-29 loss to Maria Carrillo.  The score was 42-7 at the half.

Then came realignment and the Piner program started its return.

In 2012 they went 4-6 and just missed an NCS playoff spot.  That doesn’t sound like much, but it was the way they went 4-6.  There were at least two winnable games that got away.   There weren’t too many of those during the past decade.

This year it was a 5-5 regular season record and again at least two winnable games that got away.  This time they made the NCS Playoffs.

It also turned on that the KSRO Game of the Week would broadcast the end of the Piner game from its broadcast both at Rancho Cotate High School.   The game we were doing, the Windsor-Rancho Cotate game, was over about 9:30.   The broadcast stayed on the air until the Piner game went final over an hour later, which was the longest postgame show in KSRO Radio history.  We ended the post-game show with an interview with Antonio himself.

We were following the tweets of Daniel Poulter, who used to be a contribute to this website and now is a beat writer for Justin Siena.   I texted him and told him we were following him and if you could be more frequent with the updates, which he was and did a fabulous job between our regular post game stuff, which included other interviews including Montgomery Head Coach Dean Haskins, Windsor Head Coach Vic Amick and Cardinal Newman’s Paul Cronin.

It was on November 22nd, 2003 the Piner defeated Cardinal Newman 21-14 for its last playoff win.  It took one week short of ten years for them to get another one.

The Windsor win over Rancho Cotate had to bring back some great memories for Windsor fans.

On December 9th, 2009 Windsor defeated Concord 28-20 to win the NCS Division 2 championship and the 14-0 season that went with it.  They had a combination of McAlvain and Roman to lead them to that great season.

That is what they had Friday Night, the younger brother version.

Colin McAlvain passed for 177 yards and one touchdown.

Jalen Roman caught nine passes for 138 yards and the touchdown pass.  He also had a thirty yard reception in the first quarter that set up the first touchdown of the game.

But it was a play by Roman on defense that put things away.

Rancho Cotate was hanging around trailing 23-10 with five and half minutes left and threatening to cut the lead to one score.  Roman stepped in front of a pass and returned it 100 yards for the score to move Windsor to the second round.

Hanging around is the phrase because it was a game Windsor dominated. They had two scoring drivesof 13 plays and one more of 11 to take a 23-10 lead into the fourth quarter.

The loss avenged an earlier 43-9 loss to Rancho Cotate and advances Windsor to the second round against the winner of the Casa Grande-Alameda game next Saturday.

That was more like it for Montgomery, who looked like the team that competed for the NBL championship.  RJ Flores passed for 240 yards and two touchdowns as the Vikings took the shutout win.

Flores second touchdown passes was a 25 yarder to Elijah Higgs right before the first half ended and gave Montgomery a two score lead.  Higgs played his first game since separating a shoulder in the league season opening loss to Casa Grande.  He started the season as the starting quarterback.  In this game he played receiver and caught four balls for 87 yards.

Montgomery will host the winner of tonight’s Concord-Newark Memorial game next Friday Night.

The other two games in the bracket went as expected with Clayton Valley and Northgate winning.

Northgate trailed 29-20 at the half before getting its win.  Running back Eric Hayes rushed for 263 yards and four touchdowns.

Clayton Valley didn’t need a rally as Xavier Crawford returned the opening kickoff 85 yards and led 27-0 after the first quarter in its win over San Lorenzo.

Analy did what Analy has done all season to SCL teams, jumping out to a 35-0 halftime lead in its win over Petaluma.

Kerr Johnson Jr. had two touchdown receptions of 80+ yards in the first half.  The second one went for 91 yards early in the second quarter to make it 21-0.

Analy will host the winner of the Drake-Cardinal Newman game next Friday Night.

The historic win for Piner came in an epic game.

If you haven’t heard anything about it you might find it hard to believe that at halftime St. Vincent-St. Patrick had an 8-0 lead.

The second half had three ties.  Piner took the lead for good Noel Hernandez threw a 37 yard touchdown pass to Isiah Roybal with ten and half minutes left.

St. Patrick/St. Vincent did follow that with a touchdown, but didn’t get tie number four when they missed the extra point.

Piner will be at No. 1 seed San Marin next Saturday afternoon.

Hernandez would throw two more fourth quarter touchdowns and Mark Angier scored his second touchdown of the game on a 44 yard run to put the game away.

The win assures Piner will have at least a .500 record since that 2003 season.

In other league rematch St. Helena repeated it one sided win over Kelseyville. The Saints led 47-6 going into the fourth quarter.  Sebastian Segura started the scoring on a 78 yard run on the first play from scrimmage.  That also started him on the way to a school record 270 yard rushing-four touchdown night.

St. Helena will host the winner of the St. Mary’s-Fort Bragg game next Friday Night.

Middletown continues its domination taking a 42-0 halftime lead over Emery.

Austin Benson and Coleman True each rushed for over 100 yards as Middletown moves to 10-1.

Middletown will host the St. Vincent-Salesian winner in the semi-finals next Friday Night.