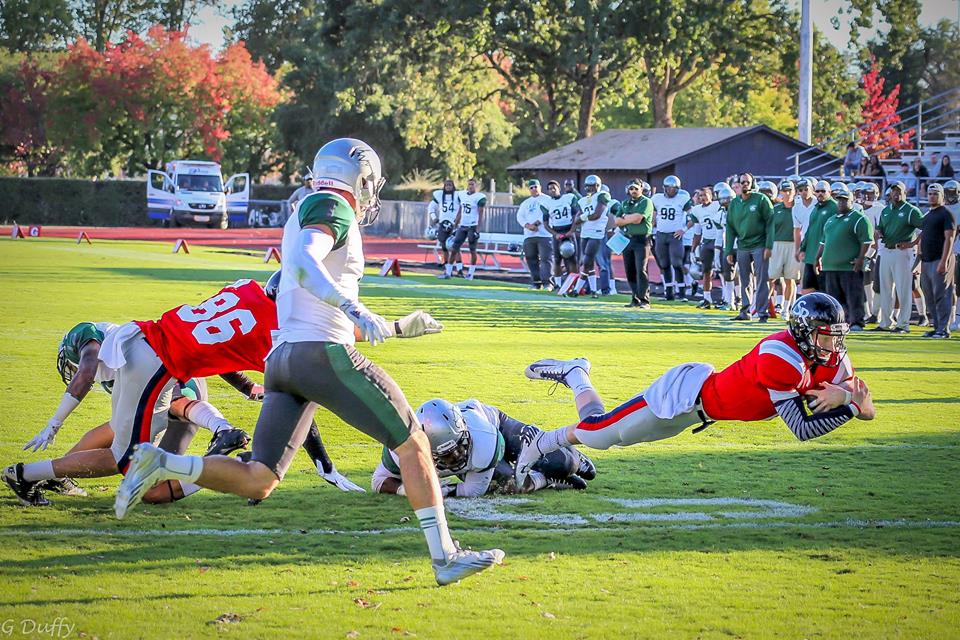 If it isn’t broke, don’t fix it.
That is how the SRJC Bear Cub football team has to look at things.
They continue to play close, exciting games.
They also continue to win.
It happened again as the No. 4 ranked team in the state defeated Laney 28-21.   The Bear Cubs are now 4-0 on the season.  The Bear Cubs have won the four games by a combined 25 points, the last three by a combined 15.  When the game gets down to crunch time, the Bear Cubs have been able to come up with the big play.
In this one, it was several big plays.
The game had a wild tone to it going into the fourth quarter, but then the defense dominated most of the second half, and the offense went on a long drive and ate up the last six minutes of the game, which ended with the Bear Cubs having the ball inside the Laney one yard line.


For a little more than half of the game, the Bear Cubs mirrored their season.  At times they looked very good.   At other times, not so much.
SRJC had a 14-3 lead early in the second quarter.  The bolt of lightning play came when Desmond Nisby took a screen pass 48 yards for the first score of the game.   It was one of two touchdown passes for Christian McAlvain and part of a 287 yard passing day to put him over the 1,000 mark for the season.
McAlvain also had two touchdowns runs.
Besides the damage Nisby did on the screen pass, he also rushed for 151 yards on 32 carries.
After it was 14-3, the not so good came next.  Laney drove for a score with 4:40 left in the second quarter to cut it to 14-9 and then two plays later, Kesomi Mafi returned an interception 20 yards for a score and after controlling play most of the way, SRJC trailed 15-14 at the half.
The second half started the same way, when Laney quarterback Kurt Palandech went 63 yards for a score.   Laney kept missing conversions, but had scored three touchdowns in six minutes to take a 21-14 lead.
The game turned on Laney’s next possession.  A bad snap on a punt gave SRJC the ball at the Laney 21.  Three plays later, McAlvain scored on a five yard run.  They failed on the extra point, and it was 21-20.
It wasn’t that score for long.  The defense held and the offense then went on a long drive, which was wrapped up on a touchdown pass in which Khihry Hayes made a nice catch.  McAlvain ran in the two point conversion, which turned out to be the last score of the game.
SRJC went into the weekend ranked No. 4 in the state.  They could move as No. 3 San Francisco lost to No. 5 American River 13-0.  That is only window dressing though.   San Francisco will host SRJC in a Bay 6 Conference game on October 25th.
Before that game though, SRJC will wrap up pre-league play next Saturday when they host Sequoias at 5 pm. The game will be broadcast on KSRO 1350 AM and 103.5 FM.
In two weeks, the Bear Cubs open league play at San Mateo, the No. 1 ranked team in the state.
HIGH SCHOOL RESULTS
NBL FINALS
No. 2 Windsor 49 Ukiah 7
No. 3 Rancho Cotate 45 Casa Grande 10
No. 4 Cardinal Newman 48 Santa Rosa 19
No. 6 Montgomery 30 No. 5 Maria Carrillo 23
SCL FINALS
Sonoma Valley 13 No. 9 Petaluma 5
El Molino 27 Healdsburg 24
SATURDAY
Piner 43 Elsie Allen 9
Tony Matignoli threw for 393 yards and four touchdowns to lead Piner over Elsie Allen.  The game turned when Matiignoli hit Ty Simmons on a 75 yard touchdown pass with :20 left in the first half to make it a 14-3 game.
The game was put away in the third quarter when Isiah Carter scored and Mark Ainger returned  an interception for a score.
It was the league opener for both teams.   Piner is 3-2 on the season.
The game was stopped with 1:20 left when Elsie Allen running back Nicholas Hercules was injured and was transported by ambulance to Memorial Hospital.  The good news about that is it apparently looked worse than it was.  It turned out to be a strained neck and he is doing good.
Elsie Allen ended the game with 19 players.
NCL I
No. 7 St. Helena 44 Kelseyville 7
No. 8 Fort Bragg 29 Lower Lake 28
No. 10 Middletown 50 Willits 6
Cloverdale 26 Clear Lake 0
My email address is jacpasquini@comcast.net
Share