SATURDAY NEAT PACKAGE: THE UNDEFEATED CHAMPIONS OF THE NBL—CASA GRANDE 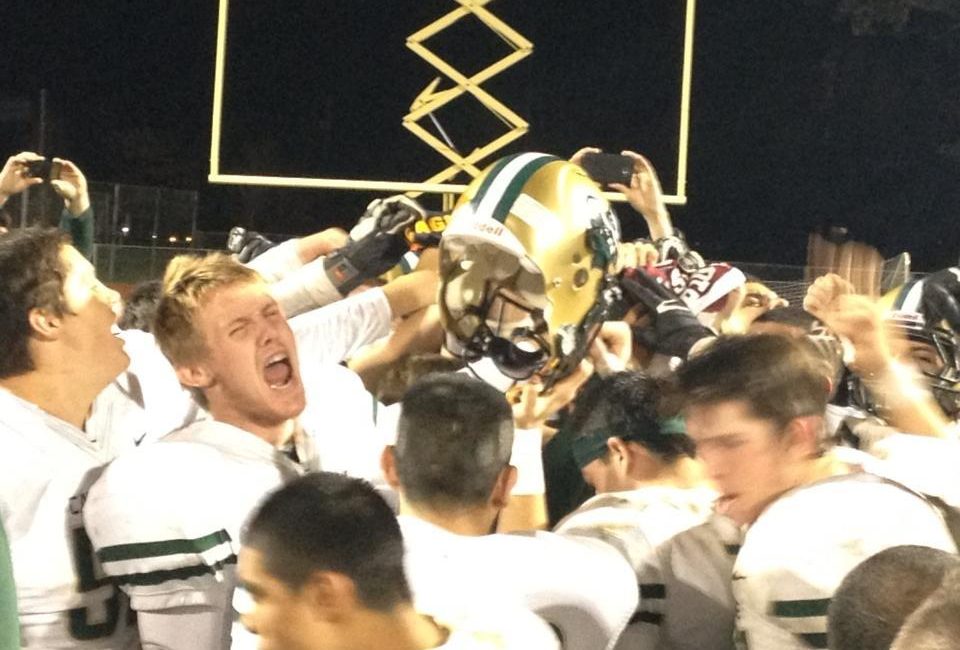 During the past decade Casa Grande has been one of the best football programs in the area.

You could make a case that they have been the best.

Since 2003 they won 92 games, twelve of those in the playoffs, seven league championships and three of every four games they’ve played.   They won 11 games in a season twice (counting playoffs) and the most losses they have had in a season is four.

The North Coast Section playoffs are considered part of their schedule.  They have been to the playoffs each season and have won at least one game eight times.

With all they have accomplished, 2013 is one for the books.

Casa Grande finished off its first undefeated regular season and did it on the road against a team that would give them the biggest competition as the best program in the area.

Casa Grande won it with its usual one-two punch on offense and a defense that has punched all season.

The one-two punch on offense is quarterback JaJuan Lawson and running back Jon Porchivina.   Actually in this game, they were a big part of the No. 1 defense in the area in one of the hardest hitting games of the season.

Lawson did most his damage in the first half and then Porchivina took over in the second.

Casa Grande’s defense kept things in check until the offense could kick things in.  Miles Gardia stopped Cardinal Newman’s first drive with his first interception and forced a punt on the second.

Casa Grande then went on a 65 yard drive to take a 7-0 lead early in the second quarter.

The rest of the second quarter belonged to Lawson.   His first impact was on defense when he intercepted his second pass on the season.

Three plays later it was his arm.   After almost getting sack, Lawson threw a majestic pass to Zakk Molina who caught in stride and scored from 62 yards out and Casa Grande a 14-0 lead.

The next time Casa Grande had the ball, Lawson used his feet with a brilliant 45 yards run to set up his second touchdown pass, this one a 28 yarder to Gardea.  That made it three touchdowns in the first half for Lawson and he had over 200 yards in total offense by halftime.

The description so far makes it seems like Casa Grande was dominating the game.  That wasn’t the case as Cardinal Newman taking some shots themselves and stayed in the game most of the way.

Zach Stoltz rushed for two touchdowns and after a scoreless first quarter, Casa Grande had a 20-14 halftime lead.

The second half scoring played out exactly the same way.  The script for both teams was different.

For Casa Grande it turned into the John Porchivina show.   The running back broke a school record by going for 301 yards in the win over Windsor last week and caught one of Lawson’s touchdown passes in the first half.

Lawson was the show in the first half; Porchivina took over in the second.  He busted for a 36 yard run late in the third quarter, which started a 61 yard drive that he ended with a 14 yard run on the first play of the fourth quarter.  That was the first score of the second half.

Then came a curious decision that basically ended the suspense for the game.  On a fourth and 20 from its own 5, Cardinal Newman ran a fake punt that was stopped well short and gave Casa Grande the ball at the 11.  Three plays later, Porchivina scored his third touchdown and Casa Grande had a 33-14 lead.

Porchivina ended the game with 132 yards and the two touchdown rushing scores to go with the receiving score.  He was also second on the team in tackles with eight.

It should be noted that like in the first half, Cardinal Newman didn’t go away.   Keaton Dunsford threw for 374 yards and two touchdowns to help keep them in range.

It was 33-21 with less than two minutes left, when Casa Grande recovered an onside kick.  On the next play Cody Hughson busted one up the middle untouched and Casa Grande head coach Trent Herzog got a Gatorade shower and Casa Grande had its undefeated regular season and North Bay League championship.

Now they wait for Sunday hoping they will get a No. 1 seed when the NCS playoffs are announced on Sunday.

It doesn’t matter what happens with the seedings or in the playoffs.

This will always be remembered as a historical season for the 2013 NBL Undefeated Champion Casa Grande Gauchos.

Clayton Valley defeated Northgate 56-28 to win the Diablo Valley League, finish 9-1 and move back up to No. 2 in the NCS Division 2 power rankings.   The lone loss was the De La Salle to open the season.

Clayton Valley is the competition for Casa Grande for the No. 1 seed.  We shall find out twenty four hours from now.

We will have a preview of the picks Sunday Morning.

Cardinal Newman will be in the Division 3 playoffs.

The Windsor win over Montgomery turned the Casa Grande-Cardinal Newman game into the NBL championship game.

It also made Windsor eligible for the NCS Division 2 playoffs.

Colin McAlvain threw for 274 yards and three touchdowns.    Two of the touchdowns came in the first quarter, including a 70 yarder to Matt Basich which started the scoring.

The other two scores were to Jalen Roman, one in the first quarter and the second that ended the scoring in the fourth quarter which was went for 80 yards. Roman caught seven balls for 192 yards.

It was an elimination game for Windsor and not only does the win makes them eligible for the playoffs; they have a good chance of hosting a first round game.

It is a disappointing finish for Montgomery who finishes its comeback season 8-2 and a second place finish in the NBL race.  Montgomery will get a first round home game in the NCS playoffs.

Rancho Cotate is on the bubble for a first round home game after its win over Santa Rosa.

Chris Taylor-Yamanoha scored three touchdowns, two as a receiver and one on an interception return.

Santa Rosa ended the season with an eight game losing streak after a 2-0 start and is eligible for the NCS Division 1 playoffs.

In the only game that didn’t have a bearing on the playoffs, Maria Carrillo took out its frustration on Ukiah.  Alex Netherda rushed for 131 yards and three touchdowns.  He ends the season over 1,100 yard rushing mark.

Maria Carrillo, who led 40-6 going into the fourth quarter, ends the season 4-6.

Petaluma made a statement to the NCS Committee.

Greg Tomas kicked a 32 yard field goal with :03 left to give the Trojans the win over Sonoma Valley.

Petaluma jumped out to a 14-0 first quarter lead.   Sonoma Valley rallied to tie it and then fell behind again 21-14 in third quarter.

Sonoma Valley then scored with under three minutes left to tie the game and set up the winning drive.

Petaluma quarterback Patrick Bailey rushed for a game high 111 yards and a touchdown.  He also threw an 83 yard touchdown pass to Hunter Williams which gave the Trojans the 14-0 lead.

Sonoma Valley is 7-3 and will be in the NCS Division 3 playoffs.

Petaluma is in the same position as one year ago when they were also eligible for the playoffs.  Last year they ended the regular season on the wrong end of a three point loss to Sonoma Valley and weren’t picked.

We will see what happens on Sunday.

Healdsburg and Piner should open the NCS Division 4 playoffs at home.

Analy had the week off and could be helped to a No. 4 seeding with the loss by Cardinal Newman.  In the power ratings Analy is No. 4 and Cardinal Newman is No. 5.  That wouldn’t have much of an effect in round one, but could determine home field if they meet in Round Two.

Middletown finishes the league season undefeated and hasn’t lost since the opening game forfeit to Salesian.   They look like a clear cut No. 1 in the Division 5 playoffs.

Austin Benson rushed for 148 yards and four touchdowns and added a touchdown catch and a 92 yard kickoff return in the Middletown win over Lower Lake.

Benson wasn’t the only one in the NCL I world to have a six touchdown game.  Kelseyville’s Kevin Duty had six rushing touchdowns and gained 201 yards in their win over Willits.

The losses by Cloverdale and Clear Lake, even though they are both eligible, makes things iffy for a Division 5 spot.

The two teams that beat them, St. Helena and Fort Bragg along with Kelseyville, should get into the NCS Division 4 playoffs.  St. Helena should get a first round home game.

Sebastian Segura rushed for a season high 215 yards and two touchdowns in the St. Helena win over Cloverdale.  Segura has rushed for over 1,350 yards on the season.

Tomales is eligible for the NCS Division 5 playoffs, but doesn’t appear they will be picked. If not they will miss the playoffs for the first time since 2005.

There is one more big game today for the NCL II/Bay League championship before saying good bye to the regular season.

That is the Marin County League championship game

A month ago you would have gotten good odds on SRJC being rated higher than San Francisco when the two teams met.

San Francisco was the preseason No. 1 ranked team and was still No. 1 before losing two of its last four games.

The two teams are in a three way tie with San Mateo for second place one game behind No. 1 in the standings and the rankings Butte.

This is SRJC last home game of the season.  They end the regular season next week at San Mateo who is No. 4 in the state.

Next week San Francisco is at Butte.