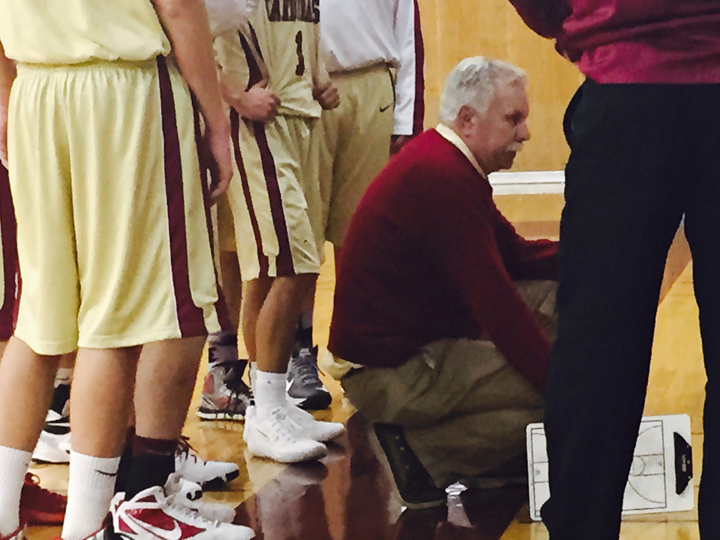 
The not so good news?   They are meeting a Cloverdale team that has come the closest.
We pretty much have gone over that history leading up to this game this week.
This has a chance to be on the list when talking Cardinal Newman’s best seasons ever, but for it to be that, the big time is now.  A win will qualify them for the Nor Cal tournament, which would be their third trip since Tom Bonfigli’s returned to Cardinal Newman in 2006.  If that doesn’t happen it will be disappointing.  The goal is the school’s first NCS championship since 1993.
While that is the overall goal for Cloverdale is also the NCS championship, this would make Cloverdale’s season.  A win over Cardinal Newman will not only get them to the Nor Cal trip for the first time since the Craig McMillan state championship season, well it will also be a win over Cardinal Newman.
It ought to be quite a scene. If the Cardinal Newman fan base shows up, you could close your eyes at tip off and think you are at a Montgomery-Cardinal Newman game, instead of a Cloverdale-Cardinal Newman game.
That is because the Cloverdale fan base will be there.  No fan base in the area follows its teams like the Cloverdale fans do, especially come playoff time.  Last season when the Girls team traveled to Cardinal Newman for a first round playoff game, Cloverdale had more fans than Cardinal Newman.
This past Wednesday in the opening round win over Fortuna, the Cloverdale Gym was packed.  Now the cynic in everyone is thinking that, of course, it’s a small gym, but remember Fortuna’s fan base had a long way to travel and didn’t bring very many fans.
If you want a hint, get there for the Girls game.
GIRLS
No. 6 Justin Siena (20-9) at No. 3 Cardinal Newman (24-5)…6:30 pm
Speaking of the Girls, Cardinal Newman tries to keep its monster 2015 year going.  Since the New Year they have been untouchable as they carry an 18 game winning streak into the game.
They are facing a Justin Siena team who collected its 20th win with a 57-41 win over Kelseyville in the first round of the NCS playoffs. It is the third straight season they have hit the twenty win mark. Last year they went 29-7. They went for win number 30 in the state championship game.
This season they won the Marin County League and have a seven game winning streak of their own.  In December they did drop a 47-41 game to Sonoma Valley.
They have four seniors on the team, but two of them are the leading scorers.  Morgan Malloy is the leading scorer averaging 15.7 a game.
Justin Siena got off to a 5-6 start to the season.  Since then they are 15-3.
That is similar to Cardinal Newman, who was at 6-5 when they started the 18 game winning streak.  The closest game during the streak was two 19 pint wins.
DIVISION 6
BOYS
No. 5 CSD (18-10) at No. 4 Rio Lindo Adventist Academy (19-5)…7 pm
No. 6 Rincon Valley Christian (16-11) at No. 3 Archbishop Hanna (22-4)
No. 7 Anderson Valley (17-8) at No. 2 St. Elizabeth ….7 pm
GIRLS
No. 9 Rincon Valley Christian (13-12) at No. 1 St. Bernard Catholic…6:30
No. 5 Cornerstone Christian (15-13) at No. 4 Summerfield Waldorf (16-7)…6:30
No. 11 Anderson Valley (10-8) at No. 3 Round Valley (16-6)…7 pm
My email address is jacpasquini@comcast.net
You can also now follow me at twitter @homer2612
Share