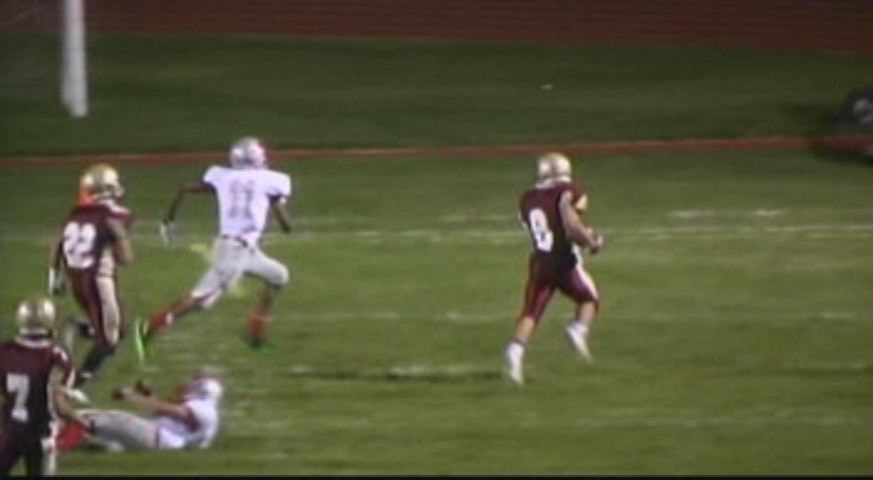 The fan base of Cardinal Newman is used to traveling and traveling good distances in the pre-league part of the football season.   This year is no different as they will make a two hour trip to kick off the 2014 High School Football Season.
Cardinal Newman is part of a special event called the Honor Bowl, which is honoring the US Military.  The event covers two weekends and has twenty games, ten in Northern California this weekend and the other ten in Southern California next weekend.  Each sight will have five games.
Cardinal Newman is playing there game in Loomis, which is on Interstate 80, not to far past Rocklin.   There will be two games Friday Night and three more on Saturday with Cardinal Newman playing the fourth game of the event, which begins Saturday at 5 pm.
After the Cardinal Newman game, Clayton Valley Charter will wrap the Northern California part of the program against a team from Carson City, Nevada.
Including the team that Cardinal Newman is playing four teams are from Nevada and there is one coming from Hawaii.
To get more information about the event go to thehonorgroup.org
SATURDAY SCHEDULE
Churchill County (Fallon, Nevada) vs. Cardinal Newman at Del Oro High School
Churchill County went 10-2 last season and also had a JV team go 7-1.   They haven’t finished under .500 since 2010.
Last season they were ranked No. 20 in the state of Nevada.   The team passed for over 2,000 yards with Nathan Heek, who is now a senior, going over 1,000.

Montgomery at Napa
Marcello Bautista makes his head coaching debut for Montgomery.   They travel to a community looking to get its mind off of life after the earthquake last Friday.  Napa has finished over .500 every season since 2009.  During the last two seasons Napa split two games with Casa Grande.  Both road teams won those games.
R.J. Flores gets to start the season as starting quarterback after taking over that position midway through last season because of an injury.
Montgomery finished 10-3 last year,which was the first time they finished over .500 since 2009.

Piner at Del Norte
Piner has a long trip itself heading up to Crescent City and tries to keep the momentum going.  They have gone from a 1-9 mark in 2010 to winning a NCS Playoff game in 2014.
Del Norte is also a program that is trying to move uphill.   They have finished over .500 once since going 11-1 in 2007.   Last season they played Cinderella in the NCS Division 4 playoffs. As a No. 11 seed they won two games before losing to No. 2 Fortuna 21-20 in the semi-finals to end the season 6-7.

Cloverdale at Calistoga
The 2013 season went two weeks to long for Calistoga.  Two years after going 0-10 they started 8-0 before losing the regular season finale to St. Vincent and a first round NCS playoff game to Ferndale.    The loss to St. Vincent cost them an outright championship.  They still got a Co-Title, the school’s first since 1997.
Cloverdale tries to keep moving up.  After three straight one win seasons and an 0-4 start the Eagles finished 4-6.  One of the games in the 0-4 start was an opening 42-13 loss to Calistoga.

St. Bernard’s at St. Vincent
St. Vincent is coming off a season in which they won they shared their second straight league title.
St. Bernard’s is coach by Former Piner head coach Matt Tomlin.

THURSDAY RESULT
Kelseyville 42 De Anza 14
A four touchdown third quarter put the game away.  Kelseyville scored from every angle with four rushing touchdowns, one passing and scoring one more on a blocked punt.