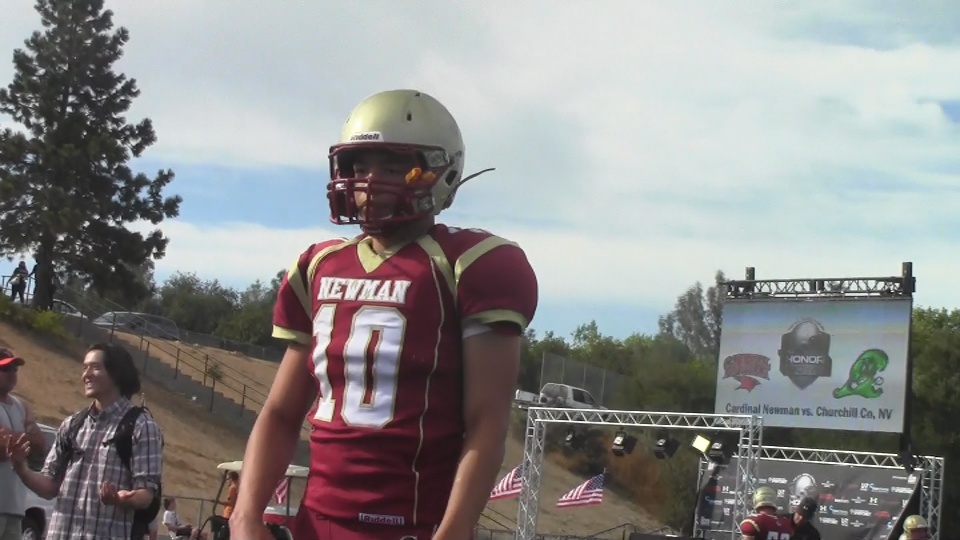 They have had their issues.
Their coach was suspended two games for having illegal practices.
They had one of the best players in the area ruled ineligible because a transfer wasn’t handled right.
Yet when Clayton Valley Charter comes into Santa Rosa to meet Cardinal Newman, they are still considered one of the best teams in not only the Bay Area, but Northern California and the State.
In the Chronicle Bay Area rankings this past week, they are the No. 3 team.   That is quite an accomplishment because you know De La Salle is No. 1.
In a Nor Cal ranking at Max Preps they are No. 6.   De La Salle is No.1 in that one also.
This isn’t the first time for this program.
Two years ago they went 12-2.  One loss was in the opener to Division 1 power Pittsburg 40-27.   The second loss was to Oakdale 27-24 in the Division 2 State Championship game that ended the season.  In between they were dominating scoring at least 40 points in every game except the NCS Championship game against Rancho Cotate which they won 35-7.
Last year, things went about the same way.   They lost the opener to De La Salle 34-14.  That was followed by week after week of domination.   The only game that wasn’t domination was a 49-48 win over Concord.
They weren’t the No. 1 seed this season, that honor went to Casa Grande, but they were the favorite.
In round one they defeated San Lorenzo 62-7 and followed that up with a 59-13 win over Las Lomas.
They seemed untouchable, although the people in this part of the world were looking forward to the Clayton Valley Charter-Casa Grande NCS Title Game.
In didn’t happen.
In the semi-finals Miramonte defeated Clayton Valley Charter 44-38.
Despite Miramonte having a 10-2 record going into the game it was considered a huge upset.
They would defeat Casa Grande in the Championship game.
They wouldn’t go to the State Championship game.
Even considering how good Clayton Valley Charter has been the last two years, most people think they are better this season.
For comparison sake, in the Chronicle Analy is No. 21 and Cardinal Newman is No. 25.
In the Northern California rankings, neither Analy nor Cardinal Newman are anywhere to be seen.
SATURDAY SCHEDULE
Clayton Valley Charter (2-0) at No. 3 Cardinal Newman (1-1)
YSN365.COM GAME OF THE WEEK
Clayton Valley Charter has two different kinds of wins.  In the first game they played right after Cardinal Newman in the Honor Bowl series of games and took a 55-7 win over Carson City (Nevada).
In the second game they took a home back and forth game over Tracy 28-21 which was a closer game than most expected.
Senior running back Miles Harrison rushed for over 200 yards and scored three touchdowns in each game.
In the win over Carson City they only threw three passes.   They didn’t need to throw, as they averaged nearly 10 yards a rush and gained over 500 yards.
In the win over Tracy, they rushed for nearly 400 yards.
Cardinal Newman also had two different kinds of games.   One was a win and one was a loss.
In the opening win the offense did what it wanted.   In last week’s loss the offense didn’t do much.
Cardinal Newman gave up over 30 points in each game.
No. 6 Cloverdale (2-0)at Berean Christian (Walnut Creek)(1-1)
Cloverdale is going for its first 3-0 start since 2007 when they finished 9-2.  That is also the last time they finished over .500.
Junior Running Back Luke Bernardi has rushed for over 250 yards and three touchdowns in the two wins.
The Eagles don’t pass much but when they do they are effective.  On the season quarterback Greg Scaramella is 13 of 16 for 211 yards and three touchdowns, two of the touchdown passes to John McMillan.
This is the third of four straight games the Eagles start on the road.   After a bye next week they travel to Clear Lake to start NCL I play.
Since going 8-4 in 2011 Berean Christian has gone 5-16 the last two seasons.
Tamalpais (2-0) at Piner (1-1)
Piner goes for its second straight win after an easy 28-7 win over Richmond, a game they led 25-7 at the half.  Tony Martignoli playing one half and threw two touchdown passes.
Tamalpais, a Marin County League team, is off to an impressive start outscoring its opponents 90-8.  In the power rankings the teams they beat are about the same as Piner.
The two teams met last season with Tamalpais taking a 21-20 win.  Piner trailed 21-0 in the third quarter before rallying to make it close.  A missed extra point cost them a tie game.
JC FOOTBALL
No. 1 Butte (1-0) at No. 12 SRJC (1-0)…5 pm