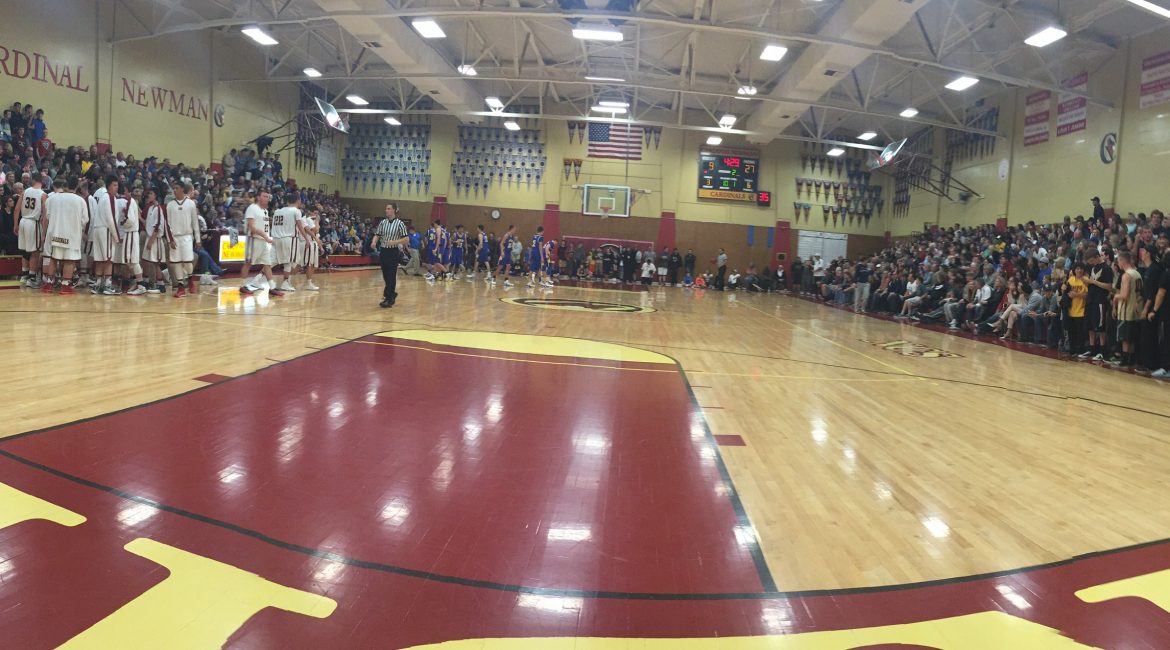 Both the Cardinal Newman Boys and Girls team barely broke a sweat as they advance to the North Coast Section Division 4 Semi-Final game, and qualified for the Nor Cal portion of the tournament.
The story of the night though belongs to the fans of Cloverdale, who showed up in even bigger numbers than expected. The blue and gold Cloverdale colors were apparent well before the Girls game had started.  The PA announcer started announcing as early as the second quarter to move as close as you can to each other because of the growing line outside.
Midway through the third quarter, the announcement added that people from Cloverdale were in the long line, hoping the Cloverdale fan base, who by now was taking up most of the gym, would move together. What he might not have known was the Cloverdale fans were packed in about as much as they could be.  By the time the Girls was in the fourth quarter, it was a standing room only crowd and the biggest at Cardinal Newman this season.
The Cloverdale fans inherited the Justin Siena Girls in the first game, so because of what happened on the court it was a long night.
For Cardinal Newman fans, things went pretty much as expected.
DIVISION 4 BOYS
No. 1 Cardinal Newman 69 No. 9 Cloverdale 39
No. 4 St. Mary’s (Berkeley) 66 No. 5 Arcata 45
No. 2 St. Patrick/St. Vincent 79 No. 7 McKinleyville 53
No. 6 Marin Catholic 57 No. 3 Salesian 55

WEDNESDAY SEMI-FINALS…(Both games at 7 pm)
No. 4 St. Mary’s (Berkeley) (17-10) at No. 1 Cardinal Newman (27-2)
No. 6 Marin Catholic (20-10) at No. 2 St. Patrick/St. Vincent (22-8)
The last time the Cloverdale fans had something to cheer about in earnest, was on a basket by Marcus Poe with 1:11 left in the first which made it 10-9 Cardinal Newman.  When Adrian Bernardi hit two free throws for the Eagle’s next score, it snapped a 17 point run by Cardinal Newman and the Cardinals were well in control of the game.
Cardinal Newman showed what kind of a team they are during the run.  Six different players scored during that stretch.
The rest of the game it was Cloverdale trying to get back in the game and not being able to.  They made a mini 7-0 run, that ended the second quarter and start of the third to cut the lead to 35-21.  Cardinal Newman called a time out and went out and scored ten straight.  Again, they shared the wealth as four different players scored the ten points.
When all was said and done Conner Rubattino was the leading scorer with 16 points.  He was one of four Cardinal Newman players in double figures.
Travis Kitowski hit three 3’s, two of them in the fourth quarter, to lead Cloverdale with 12 points as the Eagles season ends at 21-6.
Cardinal Newman hosts St. Mary’s of Berkeley in one semi-final on Wednesday.
There was an upset in the Division 4 bracket, as No.6 Marin Catholic defeated No. 3 Salesian 57-55.  Salesian, who looked like the No. 1 seed two weeks ago, has won four of the last six NCS Division 4 championships.
Marin Catholic rallied from a 12 point deficit with four minutes left to win the game.  They will travel to No. 2 St. Patrick/St. Vincent in the other semi-final.
DIVISION 4 GIRLS
No. 3 Cardinal Newman 59 No. 6 Justin Siena 30
No. 2 Salesian 67 No. 7 Lick-Wilderding 40
No. 1 St. Mary’s (Berkeley) 57 No. 8 Marin Catholic 26
No.4 Piedmont 66 No. 5 Arcata 47
SEMI-FINALS (Both games at 7 pm)
No. 3 Cardinal Newman (25-5) at No. 2 Salesian (26-3)
No. 4 Piedmont (18-10) at No.1 St. Mary’s (Berkeley) (22-7)

Cardinal Newman got off to a slow start.  It took them four minutes to score their first field goal. The field goal gave them a 3-0 lead.  After that they steadily opened the lead.  The biggest lead was 34, which was midway through the fourth quarter.
Tiffany Salinas and Hailey Vice-Neat each scored 12 points.  Cardinal Newman now has a 19 game winning streak and is 25-5 on the season.
The rest of Division 4 went by the seeds.  The closest game of the four semi-finals was a 66-47 win by Piedmont over Arcata.
The night wasn’t exactly thrilling on the edge of your seat playoff basketball.