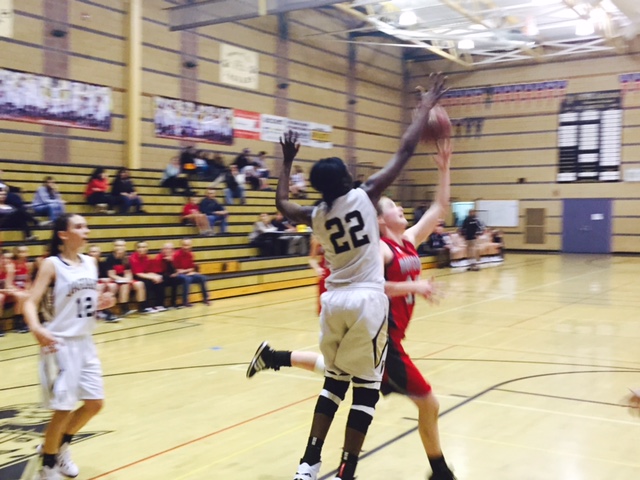 It was a light Saturday but had its interesting moments, with what might have included the “Comeback” and “Game of the Year.”
SATURDAY RESULTS
BOYS
NON LEAGUE
Liberty 68 Santa Rosa 23
St. Helena 46 Healdsburg 45 (OT)
St. Helena outscored Healdsburg 17-0 in the fourth quarter to force overtime.  Chris Saladin score 18 for St. Helena. Landon Courtman had a 23 point-18 rebound game.
Healdsburg had a chance to steal the game at the end.  After a foul with 1.1 left Healdsburg missed two free throws, got the rebound and missed the shot at the buzzer.


GIRLS
NBL
No. 7 Windsor 47 Montgomery 42 (2 OT)
Game of the year so far?
Windsor rallies from 11 down in the fourth quarter to defeat Montgomery.  Hanna May and Jessica Barbosa combined for 34 points.  The highlights are coming soon here at YSN365.com.
Montgomery was led by Shayla Neman, who poured in 18 points for the Lady Vikes.
WATCH VIDEO HIGHLIGHTS HERE


SCL
No. 5 Petaluma 55 Piner 16
No. 8 Analy 59 Healdsburg 41
El Molino 34 Elsie Allen 9
NON LEAGUE
No. 3 Sonoma Valley 51 Terra Nova 41
Allie Scranton had a double-double of 15 and 10 as Petaluma handled Piner.
Three scored in double figures as Analy held off Healdsburg.
Kayla Allen scored nine to lead El Molino past Elsie Allen.
Sonoma Valley had two with a double-double and one just miss, in a nice win over Terra Nova.  Jenny Eggers had 16 points and 10 rebounds, Grace Cutting 11-10 and Sami Von Gaber 9-15.
LEAGUE OVERVIEW: Petaluma and Sonoma Valley are 2-0 and the only teams left undefeated in league play.  They meet Tuesday at Sonoma Valley.
MONDAY SCHEDULE
SCL BOYS
No. 3 Piner (2-0) at Analy (2-0)
Sonoma Valley (1-1) at Petaluma (0-1)
Healdsburg (0-1) at El Molino (0-2)
NON LEAGUE
Emery at Elsie Allen
COLLEGE RECAP
Tough weekend for the local college teams, who went a combined 0-6.
The SRJC Men and Women each had one game and lost by a combined three points.  They are both 1-1 in league play.
The Bear Cubs are next in action on Tuesday at Sierra.  The Sierra Mens team is 2-0 in league play.
Sonoma State Men and Women both went 0-2.
The Men went into the weekend with seven wins in eight games.  They are in a three way tie for third, one game out of first.  There is a two way tie for first.  One of the teams is Cal State Stanislaus, who Sonoma State meets on the road next.
The Sonoma State Women fall to 4-4 in league play.
My email address is jacpasquini@comcast.net
windsor vs montgoemry,ysn365.com
Share