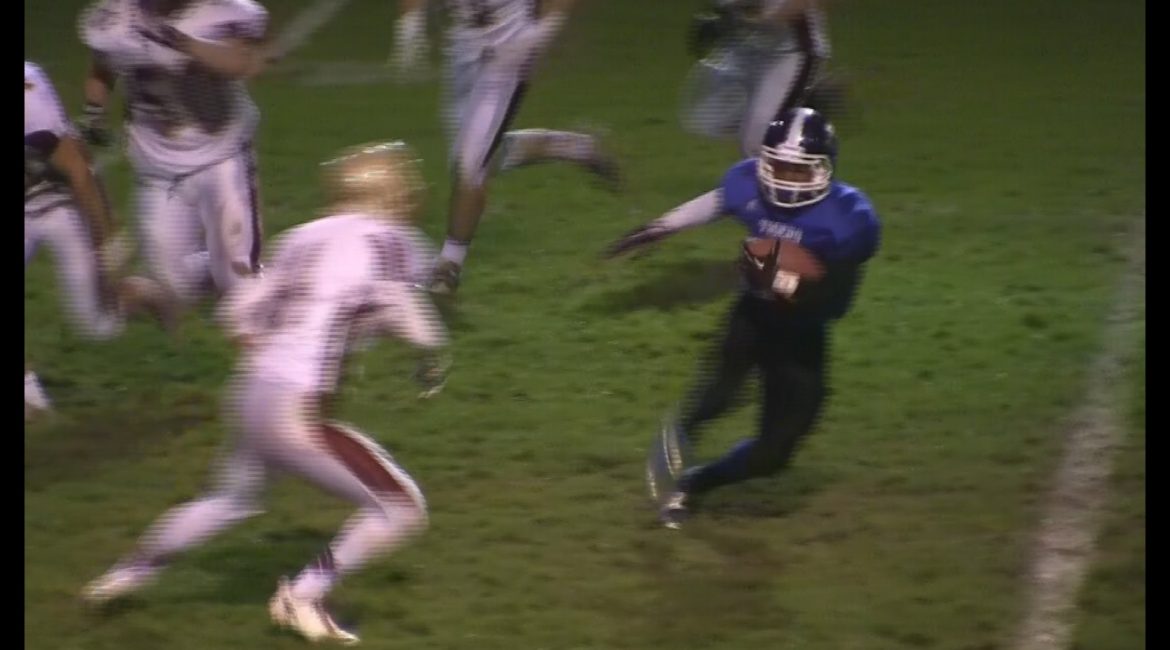 This is the first in a series of looking back at the 2013-14 school year, starting off with the fall.

August 30— Analy defeats Pittsburg 37-21 on the night that started the high school football season.   Pittsburg went into the game ranked No. 3 in the Bay Area Preseason Polls.   It is being called the Analy’s best win in the history of the school.  The game started quite a school year for Analy.

August 30…Montgomery defeats Pinole Valley in Dean Haskins’ first game as Head Coach and the first game that Jason Franci wasn’t Montgomery Head Coach since 1979.  It would start a great season for the Vikings.   After finishing below .500 in four of the last five seasons, that they went 10-3.

September 6—KSRO returns with the Game of the Week and has a thriller as Analy holds off Maria Carrillo 34-30 in a back and forth game.    Maria Carrillo rallied from a 20-7 first quarter deficit to take a 30-27 lead in the third quarter.   Maria Carrillo fumbled the ball away at the five yard like with two minutes left to set up the winning touchdown for Analy.  Maria Carrillo running back Alex Netherda rushed for over 200 yards in the first half.   The game was one of five that were played that Friday night that were decided by seven points or less.


September 23—In the first YSN365.com rankings of the year, Casa Grande is No. 1 in football.   They would keep that position all season.   Behind Casa Grande was No. 2 Windsor, then Cardinal Newman and Analy.   Analy would end up No. 2 and defeated Cardinal Newman in the second round in the NCS Division 3 playoffs.

September 27—Calistoga running back Dylan Alverado rushes for 407 yards and seven touchdowns in a 55-28 win over Emery.   A week earlier he had rushed for 270 yards in a win over CSD of Fremont, which broke a school record.   He ended the season with 1,978 rushing and 25 touchdowns.


October 4—Montgomery goes overtime to defeat Cardinal Newman 31-25.   Logan Francavilla had 41 carries for 158 yards and three touchdowns, including the game winner.   This turned out to be the game that decided second place in the North Bay League race.

October 22—Sonoma Valley Volleyball wins third straight SCL Championship.   Sonoma Valley went 30-7 on the season.  Mackenzie Albrecht is named All-Empire Player of the Year.  The Dragons lost their only league game 3-2 to Petaluma, which was the final league game of the season.   They got revenge for that a week later when they defeated Petaluma 3-0 in the SCL Post Season Championship match.

October 29—Montgomery Boys Soccer team wraps up the NBL Regular Season Championship with a 3-0 win over Cardinal Newman.    The Vikings ended the season 16-4-3 and were the No. 1 seed in the NCS playoffs, where they went to the Championship game, but lost to Tamalpais 3-2.

October 31—Sonoma Valley defeats Analy 1-0 in the final SCL Boys soccer season game of the season.  The two teams end the league race tied for first.   It is the fourth straight season Analy has won a league title.  Miguel Guillen scored the only goal with five minutes left in the second overtime.  It was his second goal of the season.

November 1—Analy defeats Petaluma 42-13 to wrap up its second straight SCL football championship.   The Tigers finished undefeated in league play with the Petaluma game the closest final score.  They would beat Petaluma again two weeks later in the first round of the NCS playoffs.   Analy ends the regular season 9-1.

November 8—Casa Grande defeats Cardinal Newman 40-28 to wrap up the NBL Football Championship.   The win moves Casa Grande to a 10-0 mark, the first time in school history they have finished the regular season undefeated.  Quarterback JaJuan Lawson threw three touchdown passes while passing for 171 yards and rushing for 113.  Running back Jon Porchivina rushed for 132 and two scores.  The week before Porchivina rushed for a school record 301 yards in a 42-28 win over Windsor.

November 8—Middletown defeats Lower Lake to wrap up the NCL I championship and ends the regular season 9-1.  The lone loss was a season opening forfeit loss to Salesian.   Salesian would win their third NCS championship in five seasons, defeating Middletown 21-13 in the semi-finals.

November 15—Piner rallies to defeat St. Vincent-St. Patrick 43-29 in the first round of the NCS Division 4 football playoffs.  It is Piner’s first NCS win since 2003.   St. Patrick-St. Vincent had an 8-0 lead at halftime.   Then came a crazy second half that had three lead changes before Piner dominated the last half of the fourth quarter.

November 16—Maria Carrillo Girls Soccer team wins third straight NCS Championship and is ranked No 1 in the Country.   The Pumas have gone forty nine games without a loss.

November 16—Anderson Valley wins its third straight NCS Division 3 Boys Championship in four years with a 1-0 win over Drew.  They finish the season 20-3-1.

December 7—Miramonte defeats Casa Grande 41-28 in the NCS Division 2 championship football game.   It is the only loss of the season for Casa Grande.

Coming soon the rough winter we had.