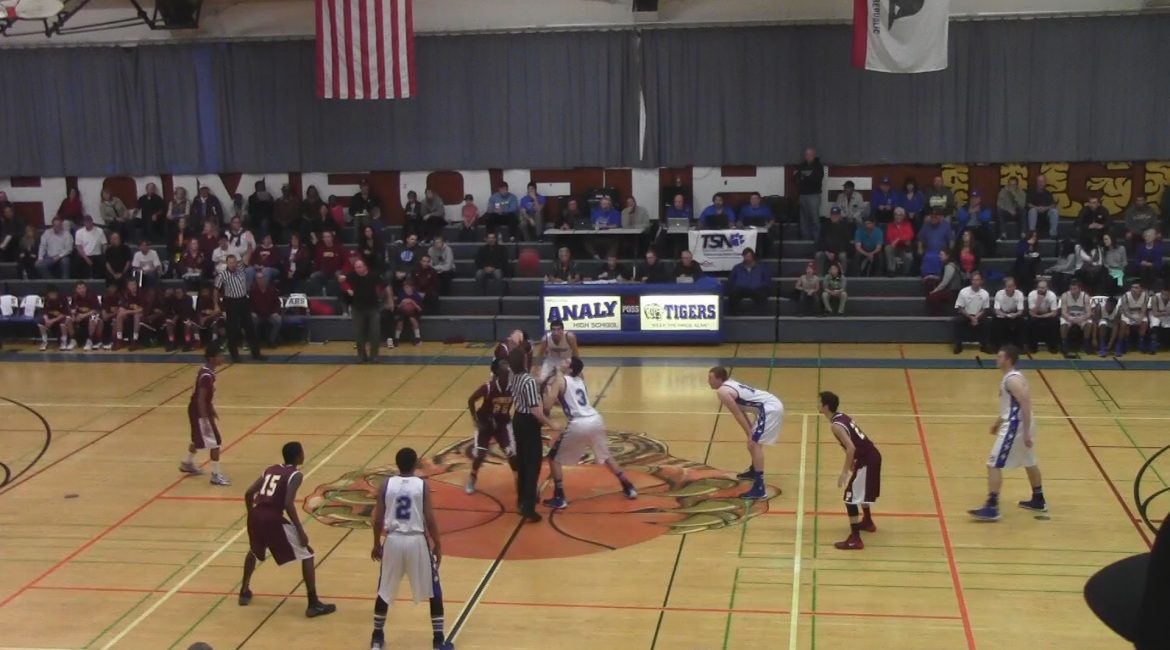 During the regular season, Piner and Analy split two thrillers with both games going down to the last second and a clutch play winning it with :06 left or less.   In the Sonoma County League Post Season Championship Game, a standing room only crowd was enjoying what appeared to be a countdown to the same kind of finish.   Instead they saw a second half that turned in a parade to the free throw line.   Analy did most of the marching and took advantage to pull away for a 73-61 win and take its fifth SCL Post Season Tournament Championship in six years.

The first half was all about the kids making decisions, plays and momentum swings.

The first quarter belonged to Piner.  Guard Keith Adams scored the last six points of a 13-1 run to give Piner a 17-9 lead late in the first quarter. Adams hit a three pointer with six seconds left last Friday to give Piner a 52-51 win over Analy, which was the Tigers only league loss and would become the main victim of foul trouble.

Momentum can be a fickle thing.  It was all Piner’s as they set up for the final shot of the first quarter.  Piner attempted it a little early and it was blocked TJ Acheson, which led a buzzer beating basket by Chance Ortega.    That started a 19-3 run which gave Analy a 28-20 lead with under two minutes to go in the first half.  Five different Tigers scored points during the run.

Piner called a time out and stop that momentum by scoring the last five points of the half.  In role reversal, Analy was setting up for the last shot of the half, when Adonay Efriem made a steal which led to a basket by Justin Cervantes to cut the lead to 28-25 at the half.

It was setting up to be a game between two teams that just seem to go together.   The foul issues wasn’t that big of a difference in the first half, although Adams had three fouls and missed the last two minutes of the second quarter as Piner made the run to make it close.

At the time, Analy led 31-30 and they wouldn’t score another field goal the next three minutes, but the free throw parade had begun.  In those three minutes, Analy was seven of ten from the line.

Despite being without Adams and the free throws, Piner hung in there and were still in the game after three trailing 44-40.

Adams was back into the game one minute into the fourth quarter.  He would foul out three minutes later on a foul, that let’s just say he didn’t get his money’s worth on with how much contact there was.

Piner had been in the double bonus for a while and the two free throws after that foul gave Analy a 56-47 left.  Analy got a lot of free throw opportunities in the second half and they took advantage by hitting in one stretch seventeen of nineteen.

The two teams combined for 50 points in the fourth quarter.   Analy scored 29 points, a good portion of that was 13 of 16 from the foul line. The only thing that kept Piner close was hot three point shooting by Nebi Gedlu who hit three in the last three minutes which was part of a 14 point night.   Efriem was the Prospectors leading scorer with 15.

Analy was led by Malcolm Jenkins with 24 points, ten of those in the fourth quarter including six of eight from the line. In the second half alone Analy was 21 of 30 from the line.  For the game Piner was 10 of 18.

Jenkins was one of four Tigers in double figures.   Mohammed Hallaweh scored 15, 12 of them in the second half, eight of ten from the foul line.

The win gives Analy a 20-8 record.   It is the sixth straight season that Analy has hit the twenty win mark.   Piner ends the regular season 17-10.  Both teams should be picked for the NCS Playoffs on Sunday.

There is more action at Analy tonight with the SCL Girls Post Season Tournament Championship.   Analy, who went through the league race undefeated, plays host to Petaluma.  The Analy wins during the league season were 54-53 and 43-28.  The one point win was the game at Analy and was the first game between the two.

To watch video highlights of the Boys game click here: