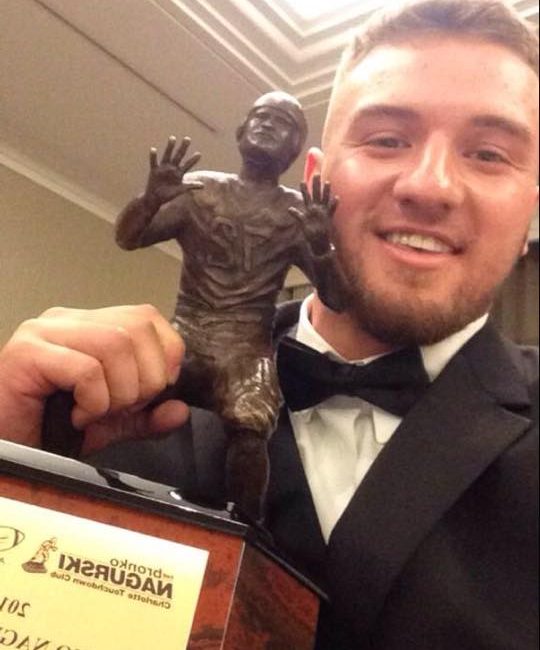 CHARLOTTE, N.C. — Arizona linebacker Scooby Wright won the Bronko Nagurski award, given to the nation’s top college defensive player, on Monday night.
Wright was considered a two-star recruit coming out of high school and said the Wildcats were the only Football Bowl Subdivision school to offer him a scholarship.
The 6-foot-1, 246-pound linebacker used that slight as motivation. He took aim at the rest of the Pac-12, turning in a stellar sophomore season with 89 tackles — 27 for a loss — and 14 sacks, helping the Wildcats (No. 10 CFP, No. 12 AP) earn a spot in the VIZIO Fiesta Bowl against Boise State.
He became the first underclassman to win the Pac-12 defensive player of the year honor.
He started 12 games as freshman for the Wildcats and had 89 tackles.
“Coming out of high school, I didn’t really have too many colleges knocking on my door — actually nobody really wanted me except Arizona,” said Wright, who received the Nagurski award at a banquet sponsored by the Charlotte Touchdown Club. “So I always have that little chip on my shoulder. You always remember those people who didn’t think you were good enough. It still motivates me to this day.”
Wright said playing against Washington, California and UCLA seems to give him extra motivation.
Watch Scooby Play in High school:

“It was about the Arizona coaching staff believing in me,” Wright said. “They just believed in me. They called me out of the blue one day and said, ‘Hey, we’re going to offer you.’ That was the cool thing — there was never any gray area. They wanted me.”
Wright, whose given name is Phillip Wright III, said he wouldn’t have even been in the running for the award had it not been for his teammates.
“We had a great year with the program and we haven’t had a 10-win season in a while,” Wright said. “We’re going to the Fiesta Bowl, and that will be good.”
Wright barely made it to the ceremony on time after experiencing some mechanical problems with the plane on his way to Charlotte.
The other finalists for the Nagurski award were Texas defensive tackle Malcom Brown, Alabama defensive back Landon Collins, Mississippi defensive back Senquez Golson and Louisville defensive back Gerod Holliman.
Several winners of the Nagurski award have gone on to play at a high level in the NFL, including Luke Kuechly, the reigning defensive player of the year, Champ Bailey, Terrell Suggs, Derrick Johnson and Charles Woodson.