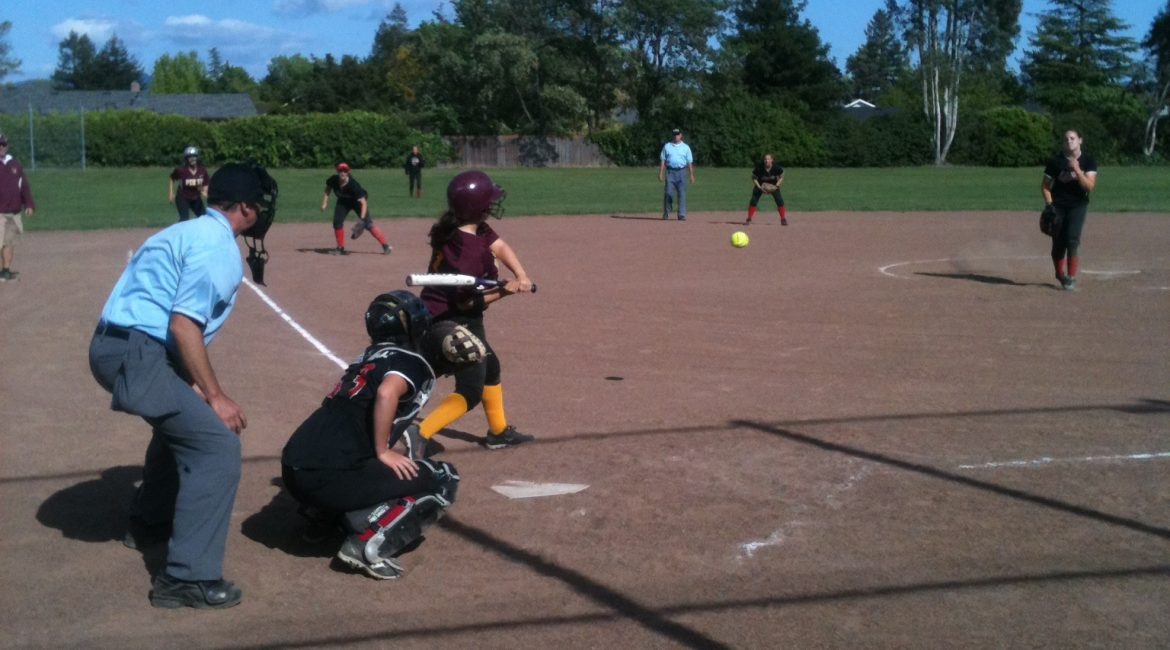 It isn’t too often that people pay too much attention when El Molino meets Piner in softball.   There isn’t a championship at stake and neither team is ranked in the YSN365.com rankings.  Actually these teams pretty much have been at the bottom of their leagues most of the last decade.   That changed last season when the two finished tied for the final spot in the Sonoma County League post season playoffs, so there was hope going into this season.

The hope has turned to disappointment at the start of league play for El Molino, who dropped its first three SCL games.  The hope for Piner is that they are moving in the right direction.   They went .500 through the first half of league play.  One of the losses was to Analy by a 5-3 score, in which they had a lead in the late innings.

Going over .500 would be a new world for the Piner Softball team and after a win over Elsie Allen on Monday, they needed a win over El Molino to get over that magic mark.

El Molino had a surprise for them.

After missing out on several early scoring opportunities, the dam finally broke in the fifth and sixth innings, as El Molino rallied for a 15-9 win, which not only gave the Lions their first league win, it snapped a seven game losing streak.

In what seems to be a trend for high school softball, the game started ten minutes before the official 4 pm game time.   It started good for El Molino as they jumped out to the lead in the first inning on a two out two run triple to start the scoring.

I would like to give you more details about the El Molino scoring, but I made a mistake by not double checking the MaxPrep roster with the El Molino team.   I saw before the game the roster was there and didn’t really examine it which is a shame on me.   When I started writing this I realized the mistake as the roster only goes up to No. 15 on MaxPreps and in the game there were numbers higher making big plays for El Molino.

After taking the early lead, El Molino had a chance to really boost the lead in the next two innings, having runners at second and third with one out, but failed to score.    It looked like that would come back to haunt them when Sienna Carretero, who is a freshman and batting a team high .481, launched a two out two run homer in the bottom of the third to tie the game.  That was followed by a three run fourth, two of them brought in by a triple by Cailyn Calison which was followed by an RBI double by Victoria Torres to give Piner a 5-2 lead.

One of the reason there is hope for Piner in the future is how young they are.   They have two seniors and Calison who is batting .452 on the season and leads the team in RBI is a junior.   She has also pitched most of the innings on the season.

It appeared that Callison was going to dodge another bullet in the fifth, when she was one out away from getting out of a bases loaded jam.  But El Molino got the big hit, a base hit to left field.   The ball was bobbled in the outfield and that allowed all three runners to score and just like that it was a 5-5 game.  It was followed with bases hit up the middle which turned out to give El Molino the lead for good.

The clutch hit opened the flood gates.  El Molino sent 12 batters to the plate in the sixth inning, scoring seven runs to put the game away.   Five of the seven runs were scored after two were out.

My apologizes to the El Molino fan base and the kids for not having the right names.   I can’t remember that happening before.   According to the box score the winning pitcher was Maddy King.   Hailey Millerick had three hits and scored two runs and Kayla Allen hit a homer.

Piner is still the front runner for the final spot in the SCL Softball post season tournament.   The chances to get over .500 gets rough now as the next three games are against Sonoma Valley, Petaluma and Analy, who are the top three teams in the league.   All three teams are in the YSN365.com top ten with Petaluma at No. 1.

No. 2 Analy has this extra inning thing down.

They went extra innings again.   It wasn’t along marathon this time.   Grant St. Martin made sure of that when he launched his second homer of the season, a leadoff shot over the left field fence, to give Analy an eight inning 5-4 win over No. 8 Sonoma Valley.

It gives Analy a 5-1 record in extra-inning games this season.  Overall, after a 1-3 start, they are 14-4, have won eight straight and keep its two game lead in the SCL Race.

Sonoma Valley had rallied from a 4-1 deficit with a two run fifth and another in the sixth.   The four runs are the most Analy has given up since the suspended game against Petaluma which started on March 25th.

If Sonoma Valley could have pulled off the upset, it would have become a race again, because they would have moved to within one game of first.

They would have not of been the only ones.  No. 3 Petaluma would have also been one back as they defeated Healdsburg 7-0.  Will Nevin went the distance pitching a one hitter and striking out 11.  He carried a no hitter into the seventh inning before giving up a leadoff triple to Benny Shakked.   He then ended the game by striking out the side.

Analy is back in action again today as they have make-up game against El Molino, who is battling Piner for the SCL post season tournament final spot.

The North Bay League softball race now is a three team race.  No. 2 Rancho Cotate, No. 3 Maria Carrillo and No. 5 Santa Rosa all won and now have a two game lead over the rest of the pack.

Two of the three meet on Thursday, when Rancho Cotate hosts Maria Carrillo.    The last two times the teams have met Maria Carrillo has rallied late to take a one run win.   Both those games were at Maria Carrillo and the first one late last season which basically decided the NBL race.

This one won’t decide the NBL race, with Santa Rosa involved.   They host Montgomery on Thursday and still have Maria Carrillo and Rancho Cotate on the schedule.

Montgomery will be trying to play spoiler for the second game in a row after coming up with one of the post dramatic wins of the season, scoring 3 in the bottom of the seventh to defeat Cardinal Newman 3-2.

Montgomery wiped out the 2-0 lead on the first two pitches of the seventh inning, on a double by Hailey Hermann, which was immediately followed by a two run homer by Hayley Komrij.    Two hits and an error loaded the bases with one out when Alyssa Coronado brought in the game winner on a solid single to left.

It is Montgomery’s second straight win after a 0-7 start to league play.   Two of the losses were by one run and other went extra innings.

The Maria Carrillo Baseball team’s first game as No. 1 went like the rest of the season.  That means very good.

Maria Carrillo scored five in the second in a 12-3 win over Ukiah in a game that was a rain make-up.  Jared Brazis went five innings and gave up one hit.  Keith Wallach and Peter Hoge each had three hits.

Maria Carrillo keeps its two game lead in the NBL race.  There is a full schedule on Wednesday, including Maria Carrillo at Rancho Cotate