SOFTBALL: MARIA CARRILLO ANOTHER ONE RUN WIN OVER RANCHO COTATE 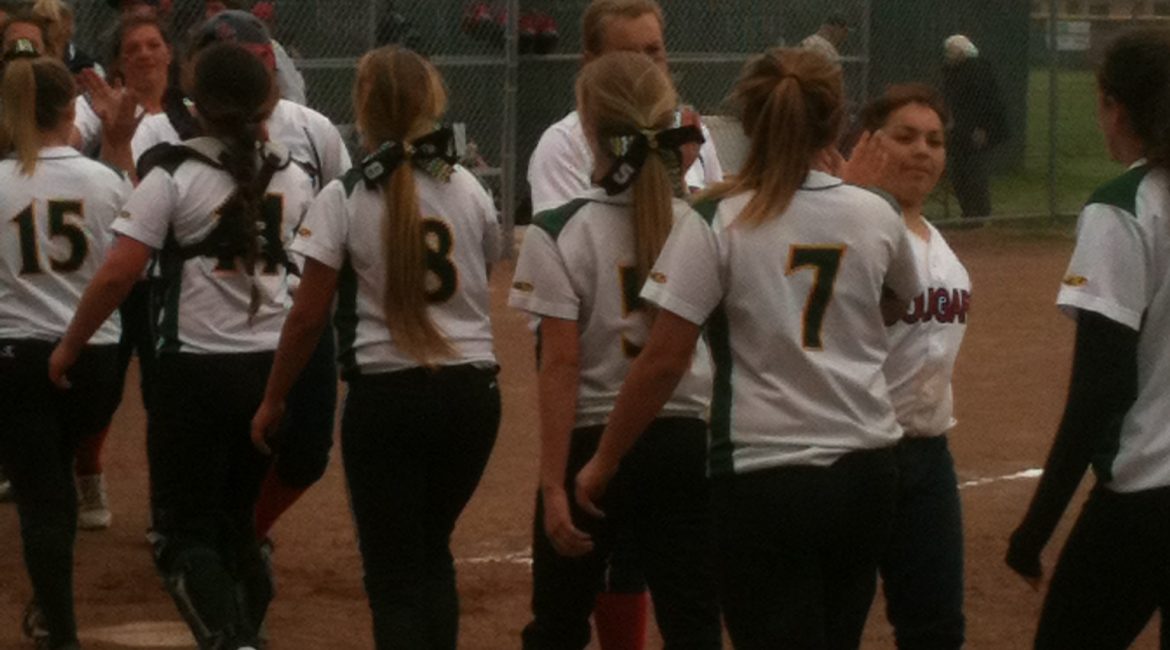 Maria Carrillo’s Robin Johnson isn’t known as your classic strike out pitcher.   She is more about letting her defense make the plays, which they are very good at doing.

In a game between two of the three teams tied for first in the North Bay League softball race, she found a strike out pitch.  The last five outs were strikeouts, two of them with runners at second and third in the sixth, as No. 3 Maria Carrillo defeated No. 2 Rancho Cotate in a magnificent 1-0 pitching duel.

Johnson had three strikeouts in the first 5 innings.   She spent most of the game getting fly outs.   There were only two ground ball outs.    Going into the faithful sixth, she had allowed three base runners and Rancho Cotate had only one inning in which they had more than one base runner.   That was in the third when they had runners at first and second with one out.   That was set up without the benefit of a hit.  One batter reached base on Johnson’s only walk of the game and the next on a field choice, which was a bad one, when Maria Carrillo tried to get the force at second, but was too late.  The next play was Maria Carrillo’s best defensive play  of a well-played game, that didn’t have an error.  On a fly ball to right, the runner tried to tag and advance to third, but was thrown out on a nice relay from Randi McMahan to shortstop Brittney Veler, who threw a strike to Aspen Waddle at third, to get the out and it wasn’t a close play.

The Pumas scored what turned out to be the game’s only run in the top of that inning, on a clutch two out RBI single by Hannah Chew, which scored Veler, who had singled for her second hit of the game.   Yes, even in a pitching duel like this one Veler, who has a full ride to Providence, went two for four and her average actually went down to .672.   After the single, she stole second, which was her 20th steal of the season, and went to third on a wild pitch.

Rancho Cotate freshman starting pitcher Brittney Scardina almost pitched as good as game as Johnson did.  She allowed five hits, while striking out five and walking two.   The third inning was one of two that Maria Carrillo had more than one runner on.   The freshman got on the big stage in a big game and didn’t blink.    She retired eight of the nine batters she faced with only one ball getting out of the infield.

The later the game the thicker the tension got, on a cloudy and windy day at Rancho Cotate High School.  Would that one run stand up?

In the Rancho Cotate sixth inning it didn’t appear it would.   Leadoff hitter Alexis Gumunday hit a hard grounder just fair down the left field line for a double.  She was bunted to third by Kristine Ricossa, which was the third ground out of the game and the first assist for the first baseman.  The other two ground outs were on force plays at second.  That is when Johnson found her strikeout pitch, the third out to end the sixth was on a called third strike on a 3-2 pitch.

Johnson did have three strikeouts in the seventh, not to mention one very nervous moment.   Katie Rohrer who just missed tying the game in the fifth on a long fly out to center, came even closer in the seventh.   After falling behind 0-2, she took two balls before drilling one to deep center that had the distance for a game tying homer, but not the height, missing by a foot of going out.   Rohrer had to settle for a double and four pitches later Johnson had that final strikeout and the win.

Over the last two years, this is the third straight one run win for Maria Carrillo over Rancho Cotate.

No. 5 Santa Rosa held off Montgomery 2-1 to keep its share of first place in the North Bay League race.  Santa Rosa travels to Maria Carrillo on May 6th.   There are two games between now and then.

Santa Rosa scored single runs in the 3rd and 4th and carried a 2-0 lead into the bottom of the seventh. Montgomery had the bases loaded with no outs and after scoring a run, had runners at second and third when the game ended.