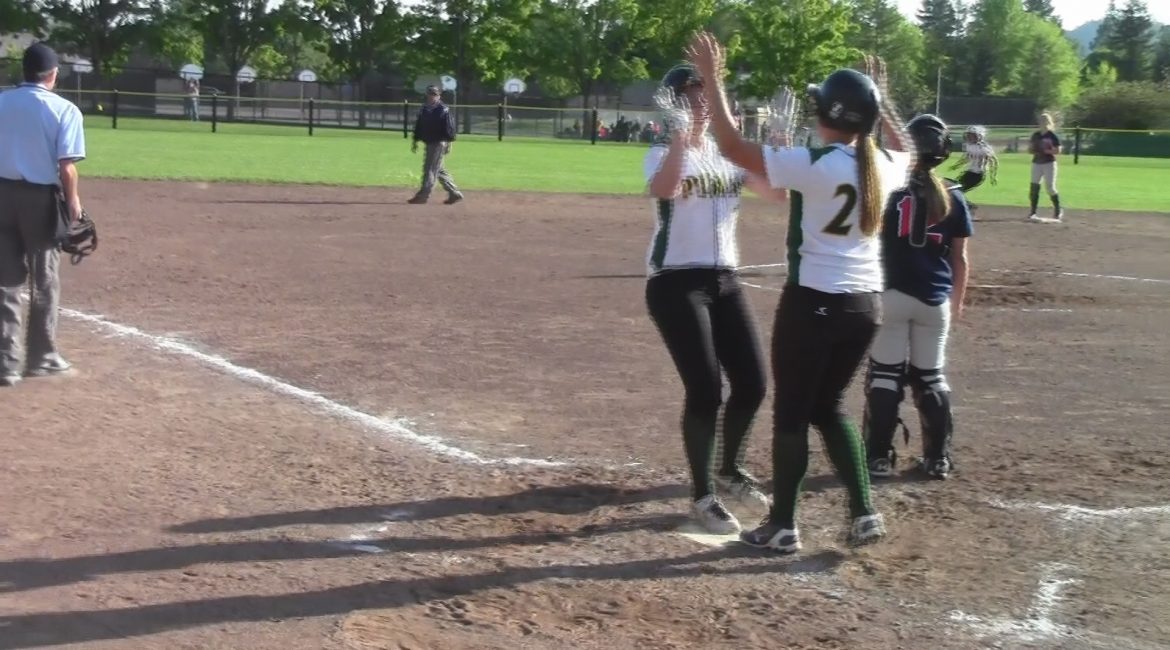 No. 3 Maria Carrillo was one out away from a frustrating loss that saw them have two runs erased because a runner missed home plate.  Then three straight singles capped off a three run seventh inning to give the Pumas a 4-3 run over No. 2 Rancho Cotate and give them first place in the NBL race.

Rancho Cotate had just scored a run in the top of the seventh to take a 3-1 lead.  That run looked like window dressing the way that starting pitcher Kazja Fa’agata-Averbuck was pitching.   Going into the faithful seventh she had given up six hits, four of those in the fourth inning.

Oh that fourth inning.  All the scoring up to then when Rancho Cotate scored two in the second, the first scoring on a two out error and the second on an RBI single by Kristine Ricosa.

Maria Carrillo got one of them back in the fourth and had runners at first and third with two outs when Hannah Chew smashed a shot just fair down the right field line that looked like a two run triple to give Maria Carrillo a 3-2 lead.    But while Maria Carrillo was sending in a courtesy runner, Rancho Cotate was appealing a runner missed home plate, which the home plate umpire agreed with.  It was the first runner and was the third out of the inning, so neither of the runs counted and Rancho Cotate still had a 2-1 lead.

This game was nothing like the games these teams were involved in on Tuesday which both teams were in high scoring wins.   Rancho Cotate missed several opportunities early, leaving two base runners on in each of the first three innings.

It was a tight defensive game.  Rancho Cotate made several sparkling plays in the field and didn’t commit an error.  Maria Carrillo settled down defensively after committing errors in each of the first three innings.   Robin Johnson went the distance and struck out four of her five in the first two innings to help get through until they settled down on defense.

Maybe the warning signs were there when Chew walked to lead off the seventh inning.  That was Fa’agata-Averbuck’s second walk of the game.  The first one was two batters earlier before she got a ground ball to end the sixth.   She got the next two outs, including her first strikeout of the game and it looked like Rancho Cotate was going to steal the win.

Johnson then hit an RBI single to cut it to 3-2.   The power of the lineup was coming up and they came through, although they almost didn’t get a chance to.  After Johnson’s single,  Mikaela Francis, who had doubled and scored Maria Carrillo’s run, then ripped a single to center.   Myranda Grandey, who was running for Johnson, rounded second and was almost picked off, barely getting her hand in before the tag.

Shelby Holzworth followed with another base hit to center and when the throw went to third to late runners were at second and third and just like that is a brand new game at 3-3.

It wasn’t for long as Rochelle Schulze ripped a long single to left field over everybody’s head to bring in the winning run.

The win was Maria Carrillo’s sixth straight and gives them a half game lead in the NBL race with the half game is in the loss column.  The Pumas still have a make-up game which they play on Monday when they host Windsor.

The Maria Carrillo win wasn’t the only dramatic finish in the league.  After letting an early 6-1 lead slip away Ukiah rallied to defeat Cardinal Newman 12-11.

Ukiah scored six runs in the third to take a 6-1 lead.  Cardinal Newman then rallied with two in the fourth, three in the fifth and five in the sixth to take an 11-7 lead.  That wasn’t enough as Ukiah got close with a three run sixth and then won it on a two out two run single by Kyndle Smallcomb in the bottom of the seventh to give Ukiah its second league win.

Cardinal Newman has lost six of seven and has given up at least ten runs in four of the games.

Santa Rosa stayed in range with a 9-0 win over Montgomery.  Alison Wendler had four hits, scored four runs and hit a two run homer, her second of the season.  Denia Vera pitched a five hit shutout to raise her record to 9-2.

There is no details on the Casa Grande-Windsor game.   We did get a report that Casa Grande won but don’t have a score.  If that is true Casa Grande stays two games back in the loss column.

TODAY IS THE DAY

If you go by a tie-breaker used in most sports the SRJC baseball team is the Big 8 conference champions.

That was after a 5-0 win over American River.  Jason Alexander pitched eight shutout innings to raise his record to 7-1.   Tyler Sanders gave up three hits in the ninth, but left the bases loaded to pick up his fifth save.

Ryan Xepoleas had a two run single in the three run fourth that broke a scoreless tie.  The Bear Cubs had ten hits led by two each by Nico Filice and Spencer Neve.  Neve also had two RBI, while Filice had one and scored twice.

Sierra took a 3-0 win a Modesto to stay one game back.  SRJC won two of three from Sierra earlier this season.  That is where the tie-breaker comes in.

SRJC can make things official today when they host Cosumnes River at 2:30.  Note: that game is today, not on Saturday like previously reported here.

Cosumnes River is 14-20 overall and 8-15 in league play.  SRJC swept a three game series earlier this season winning two of the games 2-1.

Sierra host Sacramento to wrap up its regular season.

CAN THEY DO IT AGAIN?

No. 1 Casa Grande tries to keep its amazing streak going and control of the NBL baseball race when they travel to Ukiah.   Casa Grande has won 18 straight including the last nine in league play which were all by one run.

There was one game on Thursday with Maria Carrillo taking a 16-4 win at Windsor.  An eight run third gave them a 10-1 lead.  Myles Andrews paced a 13 hit attack with three hits and scored three run.

Maria Carrillo is 6-4 in league play.  Cardinal Newman and Montgomery are 6-3 while Rancho Cotate is 5-4.