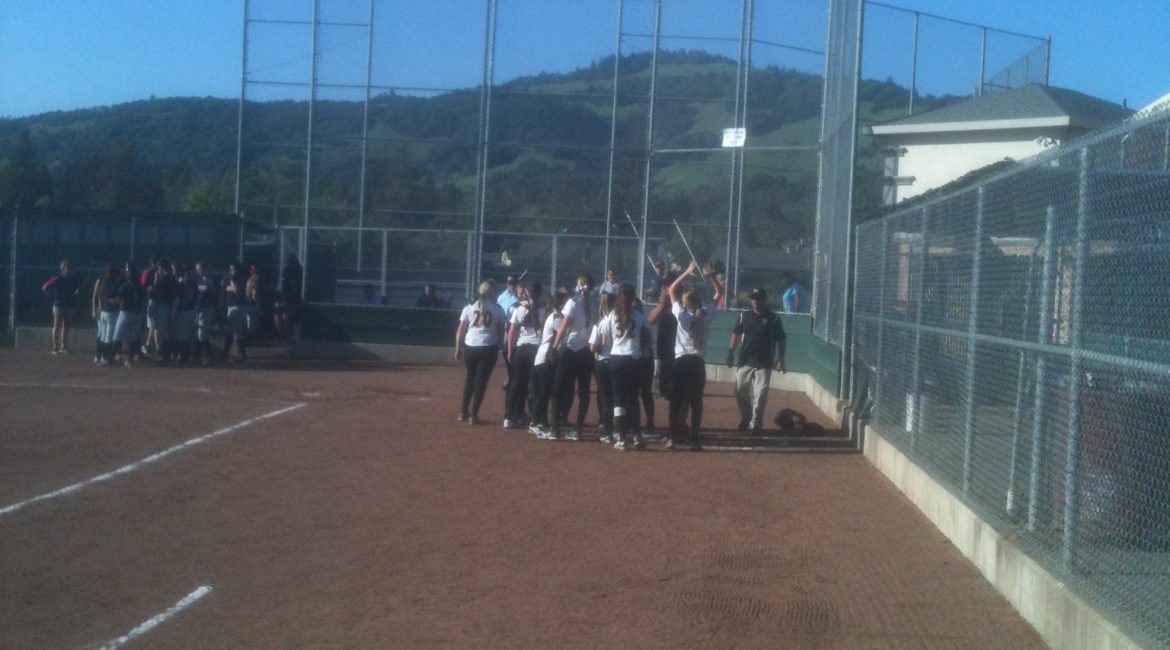 It wasn’t as dramatic and they didn’t wait until the last out, but the Maria Carrillo Softball team used the same formula as they did last year, rallying from an early deficit to edge Rancho Cotate 5-4 in the first of the two games between two of the top teams in the North Bay League.

Last year Maria Carrillo rallied with a three run seventh after two were out to take win 4-3 in a game that basically decided the NBL race.  This was another three run rally, this one in the fifth inning, which did the trick.

The game didn’t start well for Maria Carrillo, after being named the YSN365.com No. 1 team earlier in the day.  Before they got to bat they were behind 2-0 on an RBI single Janaea Mason and a double steal.   It was the freshman’s team high ninth RBI of the season.   The rally got going with an error and both runs were unearned.

It didn’t take long for Maria Carrillo to respond.     Brittaney Veler, who went into the game hitting .643, hit the first pitch from Rancho Cotate freshman Brittney Scardina on a line over the right field fence to cut the lead in half.    In the bottom of the third Scardina hit a triple on a ball that was misjudged and scored the second run on a ground out.

In between Rancho Cotate had added two more runs on an two out double by yet another freshman Taylor Del Santo, so the Cougars had a 4-2 lead going into the faithful fifth inning.

The winning rally was started when Pinch Hitter Jaymee Donovan was hit on a 1-2 pitch. With one out, Robin Johnson, who was also the Pumas starting pitcher, ripped a double into the right center field gap putting runners at second and third.  The ball turned out to be the only hard hit ball of the rally.   Hannah Chew followed with a high chopper over the third basemen which brought in the first run to cut the lead to 4-3.

With runners and the corners, Randi McMahan laid a bunt down the third baseline on which nobody covered first and it loaded the bases.   Next Malia Donavan hit a ground ball to third on which a force play at the plate was in time, but was dropped to tie the game at 4-4.  Bethany Devault followed with a ground ball that just made it through to center to give Maria Carrillo their first lead.

That was enough for Johnson who retired eleven of the last twelve batters she faced.  The only threat that Rancho Cotate had after the two run third came in the fourth and the threat was over almost before it started.  Katie Rohrer hit a leadoff double, but was thrown out at third trying to stretch it into a triple.

That was the last base runner until Johnson walked the leadoff hitter in the seventh.  She retired the next three, the last on a nifty play on a ground ball to Donovan who was playing first and got it wide of the bag and made a feed to second baseman Lauren Piehoff who was covering first to end the game.

Johnson, who is a senior, gave up six hits while striking out five and walking three. It was her ninth complete game of the season and raises her record to 7-2.

Scardina has pitched every inning for Rancho Cotate.   Going into the game she had given up six earned runs in the first seven games of the season.   Two of the five runs scored by Maria Carrillo were unearned.

The loss was the first game of the season for Rancho Cotate in eight games.   The Cougars only blemish before this game was an opening game tie with American Canyon.   They are 2-1 in NBL play.

Maria Carrillo has won six of seven and are now 8-3 overall and are 2-0 in NBL play, which momentarily puts them in sole possession of first place in the NBL race.   Windsor is the only other team in the league race that is undefeated.   They have played one game and still have a makeup game with Casa Grande.

The NBL has a full schedule on Tuesday.   Maria Carrillo has a home game against Ukiah.   The other three games are No. 4 Windsor at Montgomery, No. 5 Rancho Cotate at Cardinal Newman and No. 7 Santa Rosa at Casa Grande.