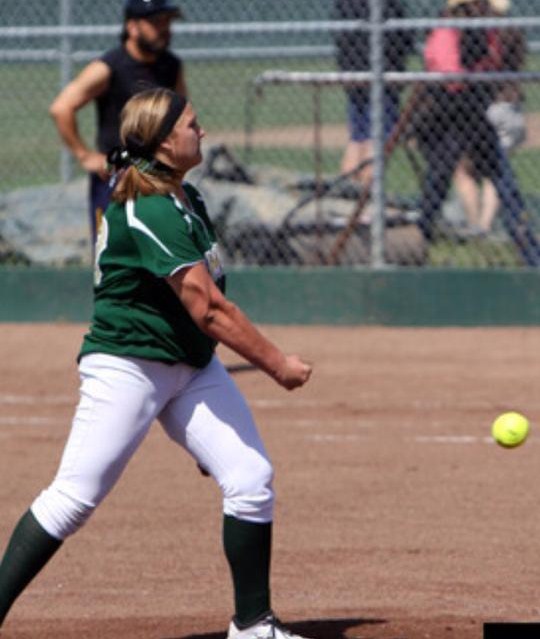 The award for the most entertaining softball team in the area just might belong to Technology of Rohnert Park.  In its second softball season, they have scores that look more like football scores, than softball.
The average amount of runs scored in a game by both teams combined is over thirty.  For comparison the average amount of runs by all the North Bay League teams is a little under 13.
The high number sometimes means the opponent is doing most of the scoring, and in some cases a lot more.  That isn’t the case here. Technology is outscoring its opponents by the average of 17-13.
I did mention football type scores didn’t I?
Technology, who is called the Titans, has scored at least twenty points in a game five times and has given up twenty once.  They have won one games by scores of 27-17 and 28-18 and lost 24-12.
The team started putting in the stats in Max Preps but stopped after three games.  Maybe the computer couldn’t handle all the numbers.
Technology didn’t make the YSN365.com rankings, but it was a close call.  The Titans are 6-4 on the season and 1-0 in NCL II League play.  They are at Calistoga on Friday.  Parents of both teams should plan a late dinner.  Calistoga goes into the week 7-7 overall and 2-0 in league play.  The average score of its games is 10-10.  The two teams met in a tournament hosted by Calistoga which was the 24-12 game won by Calistoga.
As for this week’s YSN365.com rankings, the top is the same, but there is some major juggling in the rest of the pack.
No. 1 Petaluma (14-2) (Last week No. 1) …Continues to roll with four straight and thirteen of fourteen.  Overall in the section the Trojans are No. 10 in the power rankings, No. 13 in the Prep2Prep rankings.
No. 2 Rancho Cotate (12-3) (2) … The Cougars get a mulligan after the loss to Montgomery. They followed that up with a big win over Maria Carrillo. They are the only other local team besides Petaluma in the Prep2Prep rankings.
No. 3 Ukiah (12-4) (3) …A three win week gets its winning streak to seven. They have scored double figures in six of the seven wins. They are actually in sole possession of first place in NBL, because they have played one more game than Rancho Cotate.
No. 4 Montgomery (7) (9-6)…The Vikings had quite a week. A win over Rancho Cotate and then a one sided win over Windsor. They have won six straight and not only make a big jump in these rankings, but also in the power rankings.
No. 5 Lower Lake (8) (9-2)…They have dominated during a seven game winning streak in which they have outscored opponents 91-16. The next week is crucial.
No. 6 Cloverdale (4) (8-3)… Tough 13 inning loss to Clear Lake has them looking up to Lower Lake in the NCL I race.
No. 7 Analy (6) (9-8)…A two win week which includes a wild win over Healdsburg. Looks like to be only team that can catch Petaluma.
No. 8 Clear Lake (NR) (9-5)…Has won five straight after losing the league opener to Cloverdale. The streak, including the 13 inning get even win over Cloverdale, puts them right in the NCL I race.
No. 9 Sonoma Valley (NR) (9-8)…A three game winning streak was snapped with a loss to Petaluma. Hitting is catching up with pitching and defense that has given up less than four runs a game.
No. 10 Maria Carrillo (6) (4-9)…Took a step back last week, going 0-2 and being outscored 24-7.
POWER RANKINGS
No. 1 (Last week No. 1) Petaluma
No. 2 (2) Rancho Cotate
No. 3 (3) Ukiah
No. 4 (7) Montgomery
No. 5 (4) Cloverdale
No. 6 (5) Lower Lake
No. 7 (6) Analy
No. 8 (8) Casa Grande
No. 9 (NR) Clear Lake
No. 10 (9) Cardinal Newman
THE RACES
NORTH BAY LEAGUE
Ukiah is a half-game ahead of Rancho Cotate.  That is because they have played one more game.  The two teams met on March 24th with Rancho Cotate taking a home 3-0 win.  They will meet in Ukiah on April 28th.
Before that it is a two game week.  Ukiah is at an up and coming Montgomery team on Thursday.  The Vikings are one game back of the leader in the loss column.
Both teams Rancho Cotate meets this week are under .500 in league play.
Maria Carrillo is tied for third with Montgomery.
SONOMA COUNTY LEAGUE
The last chance for a tight league race is on Thursday when Analy travels to Petaluma.  The game starts the second half of league play.  Petaluma, who is 5-0 in league play, handed Analy its only league loss on March 31st by a 7-0 score.
NCL I
Lower Lake is the only undefeated team left in league play. After a road game at St. Helena, they have back to back home games with Clear Lake and Cloverdale, who each has one league loss.
NCL II
This race has barely got going with Calistoga and St. Vincent at 2-0 and Technology 1-0.  Calistoga has home games against the other two undefeated teams this week.  Next Tuesday Technology goes to St. Vincent.
PARTING COMMENT
Former 49ers Hall of Famer Bob St. Clair passed away on Monday. He was 84.  St. Clair played for the Niners in the 50’s. He also did a weekly segment in the 90’s on KSRO with Jim Grady.
In the mid 80’s I was a clerk at 7-Eleven.  One Saturday Morning a car pulled up that had an NFL Alumni license on it.  I asked him about it and he introduced himself.   Being a lifelong Niner fans I was a little embarrassed not recognizing him.
We discussed the Niners, who were right in the middle of their glory days, for about ten minutes.  He then left, got in his car and came back in.  He gave me an autographed 1985 Niner Media Guide.  As soon as I heard about his death, I went to look in a box in which I have some old articles from that time period.
Ye,s that book was still in there.
My email address is jacpasquini@comcast.net