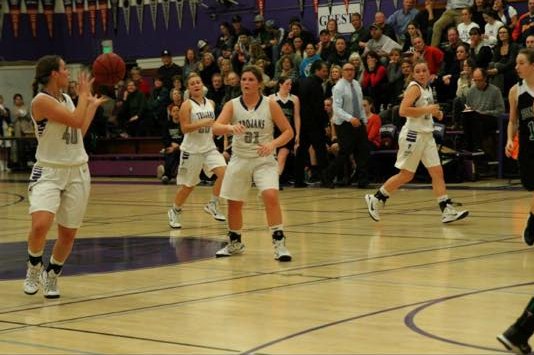 The Sonoma County League Girls Post Season championship game is between a team that has history, and another team making its own.
It also matches up the two best teams in the SCL.
Sonoma Valley, the regular season champion, plays host to second place Petaluma.  Sonoma Valley edged Petaluma by one game for its first outright league title in over three decades.  The two teams split home games during league play.


The game starts at 7 pm.
This is 28th post season tournament for the Sonoma County League. Petaluma has won the most, edging out Healdsburg 10-9.   The first tournament was in 1987, with Healdsburg the monster of the league back then.  The Hounds were in the middle of eleven straight regular season titles and won six of the first seven Post Season Tournaments.
Since then, Petaluma has been the standard.  They won the only tournament of the first seven that Healdsburg didn’t win, and have a won nine others since, including the last two.
The last time Sonoma Valley won a regular season championship, the Post Season Tournament hadn’t begun yet. The Dragons did get one post season tournament championship in 1995.
The loss at Petaluma was the only league loss for Sonoma Valley this season.
Petaluma split with Analy, which was the difference in them finishing in second place, one game behind Sonoma Valley.
Sonoma Valley is having a season that other teams at the school will be compared to.   To add to the season, they need a win over the team that everyone in the league is compared to.
SONOMA COUNTY LEAGUE GIRLS POST SEASON TOURNAMENT
TUESDAY
No. 3 Sonoma Valley 51 Healdsburg 25
No. 4 Petaluma 70 No. 5 Analy 59
THURSDAY
CHAMPIONSHIP GAME
No. 4 Petaluma (20-6) at No. 3 Sonoma Valley (22-5)…7 pm
OTHER THURSDAY GAMES
BOYS
NCL I
No. 6 Cloverdale at Clear Lake
No. 9 Willits at Middletown
Kelseyville at St. Helena
Fort Bragg at Lower Lake
GIRLS
NCL I
No. 6 Middletown at Willits
No. 9 Kelseyville at St. Helena
Clear Lake at Cloverdale
Lower Lake at Fort Bragg
It is the NCL I’s last regular season game.
The league championship has been decided.
The Boy’s champion is Cloverdale, the Girls Middletown.
My email address is jacpasquini@comcast.net
You can also now follow me at twitter @homer2612
Share