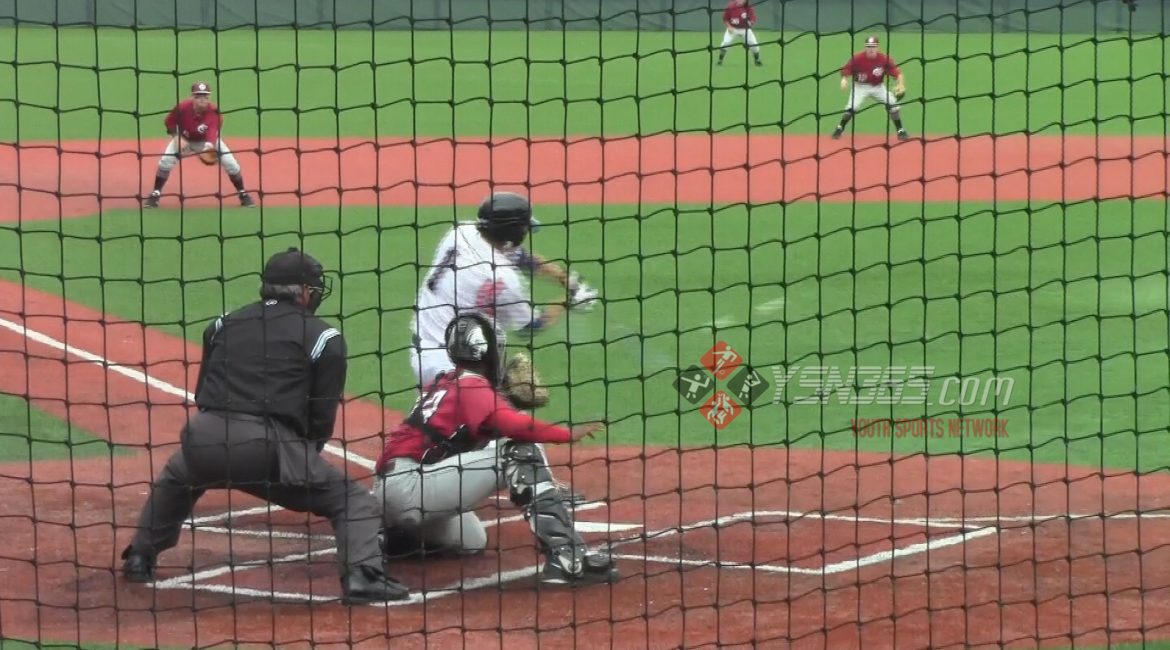 For one of the few times this season the SRJC offense was a no show and it cost them a Sole Championship in the Big 8 race.  Two pitchers for Cosumnes River combined on a one hitter in a 2-0 win.   SRJC ends the regular season 28-6-1 and 19-5 in Big 8 play, which is a first place tie with Sierra.

SRJC was stopped by two pitchers who didn’t have headline seasons.  Anthony Amara started his first game and didn’t allow a base runner until the fifth inning.   The first base runner came with two outs when Parker Shaw walked.  That was followed by the only Bear Cub hit which was a single by Nico Filas.  That was the only inning SRJC had two runners.

Nathan Gonzalez, who had pitched 14 innings all season and had an ERA of 4.50, started the sixth inning and pitched the final four innings allowing two base runners.

The offense was taken care of Brian Case who doubled and scored the first run in the second and then hit his first homer in the ninth.

It was the first time of the season SRJC was shutout.

So it’s a disappointing end of a super regular season.  Sierra gets a co-championship by scoring a run in the eighth and ninth to edge Sacramento 4-3.  SRJC won two of three against Sierra during the regular season.

The series win over Sierra should help SRJC for the seedings in the state tournament, which begins next week.  The pairings for that will be announced on Sunday.  SRJC, who has been the No. 1 ranked team in the state, will start play in the regional round next Friday when they host a best two of three series.  The series will conclude with Game 2, and if necessary Game 3, on Saturday.

THE STREAK IS OVER

Well one is.  As far as Casa Grande is concerned the most important one continues.

No. 1 Casa Grande spotted Ukiah an early run and then had its two biggest innings of the league season on its way to a 7-1.   It was the tenth league game and the first that wasn’t a one run win.  Overall the winning streak is 19 straight since an opening game loss back in late February.  The Gauchos have a three game lead in the league race with four to go.

This game was between the two lowest scoring teams in NBL League play and two of its best pitchers, so it figured to be another one of those kinds of game.   Instead Casa Grande had one of its biggest offensive explosions of the season. The seven runs are the most they have scored since they defeated Maria Carrillo 7-1 win in the Westcott tournament over a month ago.   They had eleven hits which equals a season high.

After falling behind 1-0 in the first, Casa Grande scored three in the third and four in the fourth.   Three runs is as many runs as they scored in any of the first nine league games that didn’t go extra innings.  Four runs are the most they scored when they did go extra inning.  The seven runs are as many runs as they have scored in the last four games.

The offensive explosion was plenty for Alex Bender who pitched his second complete game of the season and raised his record to 6-0.

Casa Grande has a three game lead over No. 4 Cardinal Newman, who is now in a sole possession of second place after they defeated Santa Rosa 13-3.  Cardinal Newman has won three straight and are now 11-9 of the season.

Cardinal Newman is one game ahead of three teams who are tied for third place.   That traffic jam was caused when Rancho Cotate rallied to beat Montgomery 3-2.    Rancho Cotate scored two in the sixth to tie the game and then won the game in the seventh on a bases loaded walk.

Montgomery, Rancho Cotate and Maria Carrillo are tied for third place one game behind Cardinal Newman.   On Thursday Maria Carrillo defeated Windsor 16-4 which started a two day string of rare one sided games in the NBL race.

The feature game when the league gets back together again on Wednesday is Cardinal Newman at Rancho Cotate.

If you would have picked a pitcher in the area who could throw a perfect game, Analy pitcher Dominic Padilla probably would not been too high on the list of choices. Going into the Friday’s game he had started two games and hadn’t pitched ten innings on the season.  In his first start in early March he didn’t get out of the first inning. He did get a win in his other start, going four innings.

In Friday’s game against El Molino, Padilla was dominating as he pitched a perfect game, the kind of perfect game that was similar to the one Matt Cain pitched for the Giants last season. Cain struck out 14 in that game which tied a record for the most strike outs by a pitcher throwing a perfect game.

Padilla was even more dominate then that, getting 13 of the 21 outs on strikeouts.

Both No. 3 Piner and Petaluma kept pace.

Piner held off Sonoma Valley 3-2 as Domenic Grillo started his second game and got his second win.

Piner is now 16-5 on the season and continues to have its best season in who knows how long.

They are tied with Petaluma in the SCL race, two games behind Analy.  Piner has a home game with Analy on Tuesday.

Petaluma kept pace with a 15-3 win over Elsie Allen.  Corey Echols, Jaymes Potts and Scott Hilbert each had three RBI.

The St. Vincent Baseball and Cloverdale Softball teams both had one sided wins to keep control of its league races.  Both make the YSN rankings for the first time earlier this week.

Sonoma State Baseball team won its fourth straight game over a nationally ranked team.  On Friday they opened a three game series with a ten inning 3-2 win over No. 6 or 7 (depending on the poll) Chico State.  Three pitchers combined to give up one earned run.  Chico State is in first place in the CCAA race.

Sonoma State won the last three games of a four game series against No. 12 Cal State Los Angeles last week and our 28-15 overall and 20-13 in league.  The four game series between Sonoma State and Chico State continues today with a doubleheader.  The series concludes tomorrow when it is moved to Sacramento for the second annual Capital Clash.  Chico State is 32-9 on the season.  Next weekend is the last of the regular season.