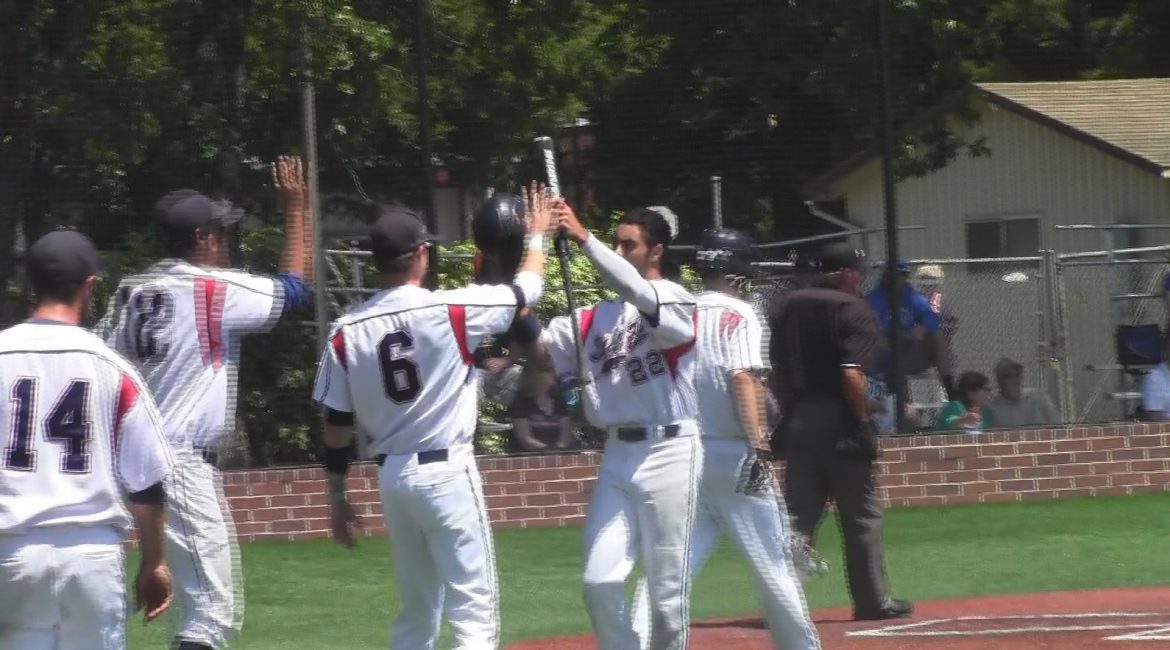 It is ironic that the school year is almost over.  People are planning for Graduation’s and finals.

It is ironic because this is the busiest it has been all year.

You’ve got SRJC in the Super-Regionals and hosting them at that.

You got two Sonoma State teams still going deep into the playoff process.

Also the baseball and softball seasons are coming to an end in the high school world.

I know that isn’t all…but let’s try to recap a busy Friday and prepare for a busy weekend.

Last Saturday was a day full of tension.   The SRJC baseball team survived the tension to advance to the State Super Regional.

In its first game of that, the tension meter barely moved as the No. 1 seed jumped out early and scored often in a 13-3 win over No. 14 Solano.

The offense started early.  In the bottom of the first Anthony Sequeira hit a fly ball to left for the first out.  That scored Ryan Xepoleas with the first run.  Stephen McElroy would hit a two run double before the inning was over and the Bear Cubs had an early 3-0 lead.

Pitching and defense took over after that for a good chunk of the game.  Until the fifth inning only one team had more than three batters bat in any inning.   That changed in the fifth when Solano scored a run to make it a 3-1 game.

It really changed in the sixth when SRJC sent twelve men to the play and scored six runs to put things away.  It was a nightmare inning for Solano, who committed three errors and gave up one run on a wild pitch.

Don’t let that fool you though.  SRJC put on one of its best offensive displays to the season.  They had a season high 19 hits and scored in double figures for only the fifth time this season, three of those times were in the first ten games.

The players that had the most hits were the top two of the order.  Ryan Xepoleas had five and Case Stafford added four.  The two were combined nine of eleven and got on base to start that three run first inning.

Spencer Neve had the season high four RBI, driving in at least a run in the sixth, seventh and eighth inning. He was one of four players who had at least two RBI.

That was plenty for Bryan Webster who went 8 1/3 and raised his record to 6-2.  He wasn’t dominate, giving up a season high ten hits, but four of those were in the eighth inning and by then the game was under control.

So SRJC gets off to a better start then it got off to last week.  Next up is a familiar opponent.   They meet No. 6 seed San Joaquin Delta, who defeated Chabot 5-0 in the second game on Friday.

San Joaquin Delta finished third in the Big 8 race, five games being SRJC and Sierra who tied for the title.  Three weeks ago San Joaquin Delta took two of three from SRJC, including the only game at SRJC by a 4-3 score.

The winner of the game moves to Sunday where they will have to lose two games to be eliminated.

The loser will be right back on the field in an elimination game.

JUST NOTING…No. 2 Sierra lost its opening game No. 8 Cabrillo 8-4.  For Sierra, the Big 8 co-champions with SRJC to advance to the state final four they need to win four games in the next two days.

The Sonoma State baseball and softball team had different results.

If you could pick who you would have rather won it probably would have been going the other way.   The baseball team won and the softball team lost.

The softball team is now on the brink of elimination.

In a classic pitching duel, Cal state Dominguez Hill got a run across in the top of the seventh to take a 1-0 win over SSU.   The run scored on a sacrifice fly by Jamie Duran on the first pitch after a forty minute delay because of lightning in the area.

The run ended a pitching duel between Stephanie Jiminez and SSU’s Samantha Lipperd.  The two combined to give up six hits, striking out 13 and walking two.

Sonoma State meets No. 7 seed Hawai’ Hilo in an elimination game at 12:30 PDT.   If they win theY will play at 3 pm.   A loss will end its season.  For Sonoma State to advance to the Division 2 World Series they will not only have to win two games today, but also two games on Sunday.

The reason the pick for a Friday win would have been the Softball team is because whether the baseball team wins the CCAA post season or not they will be playing in the West Regional next week.

The SSU baseball team is in the driver’s seat after defeating Cal State Los Angeles 5-4.    Sonoma State plays at 6 pm Saturday Evening against the winner of the Cal State Monterey Bay-Cal State LA game which starts at 2.

In the win over Cal State Los Angeles, CCAA pitcher of the year Glenn Walker threw a complete game to raise his record to 9-1.  Sonoma State scored three in the fifth, which was the last scoring of the game.    The tying and what turned out to be the winning run scored on an error that would have ended the inning.  It was the second error by Cal State Los Angeles of the inning.

Walker allowed one runner the rest of the way.  That was in the sixth on an error.  A double play followed which was the first of ten straight batters Walker retired to end the game.

No. 1 Casa Grande wrapped up a 13-1 league season with a 9-2 win over Montgomery.    A five run second gave them control as they finish the regular season with a 22-2 record.

The loss eliminates Montgomery from the North Bay League post season tournament.    Montgomery, who is 14-8-1 on the season, looks like they have a decent shot at making the NCS playoffs.

Rancho Cotate beat Montgomery out for the final spot with a 11-2 win over Windsor.

It looks like Cardinal Newman and Maria Carrillo will meet again in the first round of the NBL playoffs on Wednesday, with the other game Casa Grande hosting Rancho Cotate.

Cardinal Newman and Rancho Cotate are tied for third.  It appears Cardinal Newman wins the tie-breaker because of the numbers drawn earlier this year so they are the No. 3 seed.  That isn’t official, but unless we are missing something that is the way it will be.

No. 2 Analy finished off an undefeated SCL run with a 3-0 win over Petaluma.  In the twelve wins Analy outscored opponents 108-15.

The SCL post season is set.  No tie-breakers to worry about here.

The tournament will be played next Wednesday, Thursday and Friday in Sonoma.

On Thursday Petaluma will meet Piner.

Friday the winners will meet in the championship game.

All games start at 7 pm.

In the NCL II Championship game St. Vincent said not yet to Sonoma Academy.

St. Vincent took the championship with an easy 11-1 win.  A five run fourth gave them a 6-0 lead.

Arman Yektaparast had the threes.  Three hits (one a triple), scored three runs and also drove in three.  Yektaparast raised his average to .386.   He has also walked a team high 21 walks for an on base percentage of .551.

Alex Neve had two hits and drove in two runs.  He raised his season average to .461.

St. Vincent is 13-7 on the season and is two for two in NCL II championships since moving back to that league after realignment.

Sonoma Academy, in its second year of baseball, is 13-7 on the season and finished 6-2 in league play.

ANOTHER STATEMENT WIN BY SAME SCHOOL

The St. Vincent Softball team has had a solid year.    They haven’t been rated in the YSN rankings.

After a 0-6 start they have gone 13-2 on its way to a NCL II championship.  They followed that up with a 8-4 win over Rancho Cotate.   Ursyla Baumgarten hit her team high third homer, a three run shot in the first to send them on its way.  Baumgarten is hitting a team high .500 and also has a team high 30 RBI.

Hannah Sarlatte pitched a complete game to raise her record to 7-5.   That was after a 0-3 start to her season.

There will be more about the high school playoffs and teams coming soon.  This is one time the College and JC teams took control of things.