SRJC Bounces Back With Thrashing of Diablo Valley 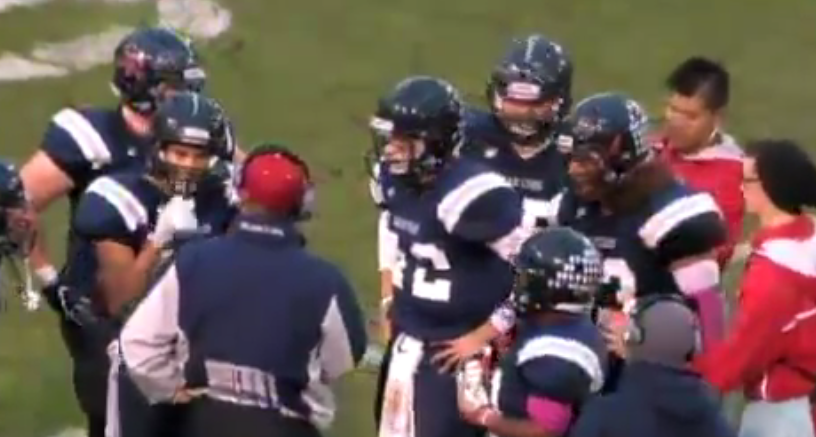 By Dale Watkins
Coming off their first loss of the season last week at the hands of City College of San Francisco, the Bearcubs returned home with a vengeance, looking to get back to their winning ways. They would do just that and do so with authority, as a dominant collective performance led to a monstrous win over the Diablo Valley Vikings, 44-3.

Following an Andros Pedroza field goal and a Viking three-and-out, Santa Rosa’s Ryan Frazier would penetrate through the line and block the ensuing punt, as Xavier Freeman recovered the ball. Star running back Ja’Narrick James would sneak out of the backfield and haul in a 4-yard pass from QB Mitch Hood for the evening’s first touchdown to make it a 10-0 lead.

Max Gibson knocked the ball loose from the Vikings’ Shane Morris on the next kickoff return, as Ryan Frazier fell on the fumbled ball to give possession right back to SRJC; two heady special teams plays by Frazier. Jay Ferguson then took the handoff and burst straight up the middle 43 yards and into open space, running practically untouched before eventually being dragged down at the DVC one-yard line. Three straight tries to punch it in and Ferguson would be successful on the third.

Diablo Valley suffered a critical loss when starting QB Jaden Brisendine would get injured and leave the game and not return, thrusting inexperienced backup Gary Chapeta into the game in his place. The Vikings got on the board midway through the 2nd quarter as their kicker Manny Lopez nailed a field goal from 36 yards to cut into the Santa Rosa lead, now 17-3.

Mitch Hood would lead an impressive one-minute, 65-yard drive down the field before halftime, capped off by connecting with a wide-open Kerr Johnson in the corner of the endzone as a result of blown Viking coverage. That nine-yard hookup would push the score to 24-3 as the first half expired.

A Ben Putman 19-yard catch-and-run set up Jay Ferguson to plow into the endzone once again, pushing the lead to 31-3. Mitch Hood would then zing one nine yards over to Kerr Johnson open on a slant route for another score, as the Viking defense was getting worn out.

An automatic Andros Pedroza would add to the lead, tacking on field goals of 33 and 46 yards; the 46-yarder bouncing off the bottom crossbar and sailing through the uprights. Diablo Valley could never really find any offensive rhythm behind Gary Chapeta, as the absence of Jaden Brisendine turned out to be a gaping hole in the team’s spirit. The damage had been done, as they found themselves victims of a 44-3 blowout.

Mitch Hood would continue a phenomenal sophomore campaign as the Bearcubs quarterback, accumulating 213 yards on 16 of 26 throws for three touchdowns in this one. Ben Putman and Kerr Johnson caught five passes apiece for 100 and 67 yards, respectively. Jay Ferguson and Ja’Narrick James finished with identical stats, each running for 54 yards on 10 carries. Former Tomales standout Willie Lepori joined the action in the 4th quarter with 6 rushes for 31 yards.

The Bear Cubs would force a total of five DVC turnovers on defense and special teams, including a Keith Benjamin interception and a Chris James forced fumble. Christian Fuca led the Vikings with 92 yards receiving.

SRJC improves to 7-1,  and will be at home one more time as they host a formidable opponent in College of San Mateo, who upset defending state champion CCSF yesterday.
Share
Copyright (c) 2016 Splash.
Theme by StylemixThemes.