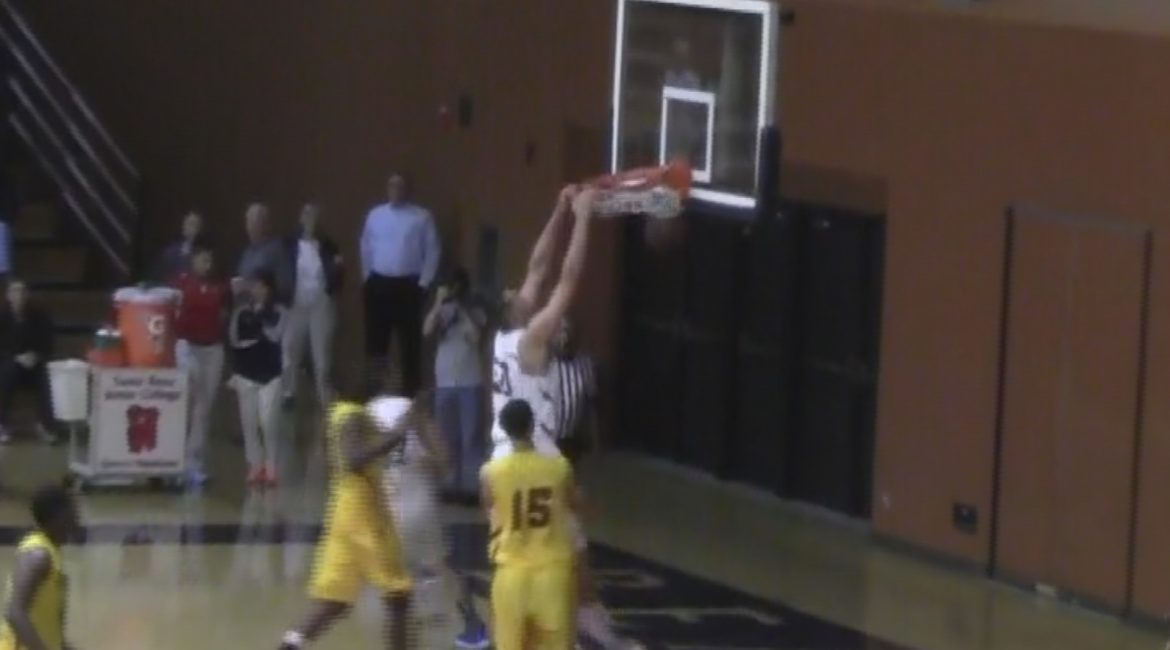 The SRJC Bear Cubs will host the No. 4 ranked team in the state in one game and a team that matched them with a conference opening win in the other.

The opponent is San Joaquin Delta and the Women’s game will start at 5:30, the Men scheduled start is at 7:30.

The San Joaquin Delta Men’s team is 1-0 in conference play after a big 71-49 win over Sierra.  The win was its third in four games, which is their best streak since a 3-0 start.  In between they went 1-5, which included a four game losing streak.

The San Joaquin Delta Women are the No. 4 ranked in the state, but are 0-1 in league play.   That is because they started league play with a home game against No. 9 Sierra, which they lost 69-63.   They are now 12-4 and the loss to Sierra was the most one sided loss of the season.

One of those losses was to SRJC in late December by a 58-56 score in the first round of the San Jose City College Tournament.

SRJC, who is ranked No. 19 in the state, won its league opener by rallying in the second half to defeat Modesto 56-49 to raise their overall record to 9-7.

Gretchen Harrigan outscored Modesto in the second half by herself and scored 39 points.  It was the third time in four games that she has hit the 30 point mark and fifth time of the season.  That includes a 41 point game in the first round of that San Jose City College Tournament.   Herrigan is averaging over 26 points a game and is the state leading scorer by nearly two points.

Nothing of the first night of league play in the NBL race changed the notion that the league is pretty balanced, except for No. 1 Montgomery.   The Vikings pulled away early and defeated Santa Rosa 61-35.

That sounds like a normal kind of results in recent years, but Santa Rosa looks like a team that is continuing to be an improving program.  The Panthers are 7-5 on the season with one of the wins over Cardinal Newman.

Santa Rosa will be at Windsor Friday Night.  Windsor is 1-0 after rallying in the fourth quarter to defeat Rancho Cotate 61-53.   The award for Rancho Cotate is a home game with Montgomery.

The Montgomery-Santa Rosa game was one of the three league games between teams that were both ranked in the first YSN365.com rankings, with Santa Rosa at No. 8.

It was the only game in which the highest ranked team won.

The higher ranked teams in those two games get a chance at the other lower ranked team with Casa Grande going to Cardinal Newman and Ukiah traveling to Maria Carrillo.

The number missing is No. 3 and that belong to Willits.  The Wolverines opened up NCL I play with a big second half and defeated Clear Lake 77-50.  Clear Lake was one of the two NCL I teams in the YSN365.com rankings under the category of: Keep An Eye On.  The other one is Cloverdale who defeated Kelseyville in its NCL I opener and travels to Willits Friday Night.

The YSN365.com rankings didn’t matter either in the opening game of the SCL Girls race.  No. 10 Sonoma Valley got 15 points from Mackenzie Albrecht and Alexa Hall and defeated No. 6 Petaluma 53-42.

The moral of the first night of league play, at least for the NBL Boys and SCL Girls, don’t take the YSN365.com rankings to seriously.